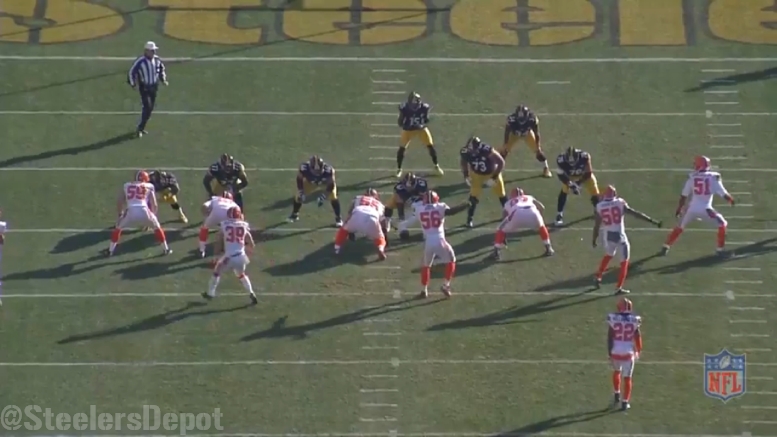 In the division-clinching victory over the Ravens on Christmas, the Pittsburgh Steelers broke out the end-around, with Eli Rogers taking the ball out of the quarterback’s mitts before sharply turning upfield for an otherwise unspectacular six-yard play. I wondered after the game if the offense was looking to put more curiosities such as that on tape in advance of the playoffs.

On Sunday, in the regular-season finale against the Browns, the Steelers put a few more curiosities of the, perhaps, gadget variety, this time involving rookie wide receiver Demarcus Ayers—and the old-man running back, DeAngelo Williams, from whom one might not expect such things.

Over the course of the game, both players took a direct snap from out of the shotgun in the Wildcat formation, which is something that the Steelers have not used at all this season. They briefly used it during the 2015 in Ben Roethlisberger’s absence, when it was most famously used with Le’Veon Bell under center for the game-winning walk-off touchdown run in San Diego.

Ayers got his opportunity relatively early, on the Steelers’ 11th offensive play in the game, which came about six minutes into the second quarter, on the first play of their fourth drive. Ayers said that he had the choice to run toward either direction on the play, but he chose to run to the right—or rather away from the left—side because he saw Jamie Collins there. Ayers managed to get back to the line of scrimmage around the right edge.

Landry Jones even came off the field on the play, which is I believe the first time that the Steelers have done that on any offensive play for—as long as I can remember. They certainly have not done that for as long as I have been charting. I recall during Bell’s rookie season when they used him in the Wildcat that Roethlisberger was not overly pleased about flanking out to the perimeter for those plays.

As for Williams, he also took a direct snap from out of the shotgun, which came late in the fourth quarter, in his case also on the first play of a drive. In his case, Jones was at least on the field, and he looked about as enthusiastic as you might expect he would. But at least it occupied Joe Haden. Perhaps because the Steelers showed Bell throwing the ball earlier in the year.

On Williams’ run, he motioned Ayers from the numbers on the left side to around the formation, to provide the window dressing that he might sweep across and take the handoff himself, or be given the ball. Williams bluffed the handoff and ran up the middle for a two-yard gain.

Earlier in the game, the Steelers also ran a reverse with Ayers, who was flipped the ball by Williams after taking the handoff, though it failed spectacularly for a 12-yard loss. Still, I found it interesting that the offense put so many of these plays on tape right before the playoffs start, and wonder if it can be entirely attributed to the fact that they were playing reserves and thought some creativity might provide a spark.