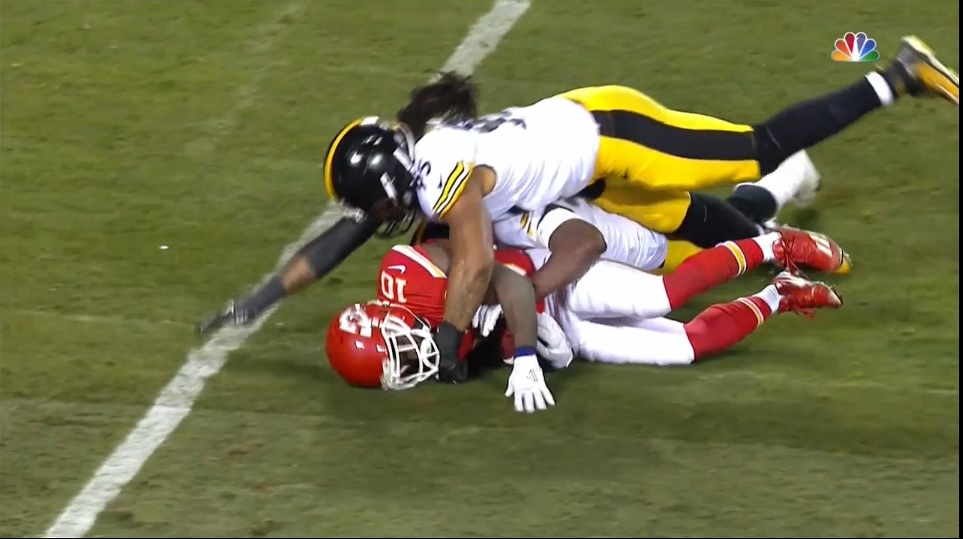 But other than my nitpicking and cynical nature, the Pittsburgh Steelers held Tyreek Hill in check for one of the worst games on the season. Mike Tomlin said they had to “sell out” to stop him because in an elimination game, there’s no adjustments to be made if you lose.

“We’re at the point of no return in some of these areas,” Tomlin said. “We put guys like Mike Mitchell on kickoffs last week because we need tacklers. No need to save bullets now. We’re in a single-elimination tournament. So I don’t know we did anything schematically but we look hard at the people we’re utilizing and want to put our very best people on the field, regardless of circumstance.”

Mike Mitchell was the only “new” face to the kick coverage unit, serving as the L1 player and replacing Justin Gilbert. Jarvis Jones shifted to the left side to replace Anthony Chickillo and Arthur Moats came in to take Jones’ spot.

It was simply a high level of execution, led by Vince Williams, who had two special teams tackles. Tomlin praised him at today’s press conference.

“Vince Williams was awesome in terms of leading the charge in that regard.”

Tomlin said the team decided to get away from squib kicking after the first one failed, not wanting to give the Kansas City Chiefs “real estate” as they did the first time around. Hill averaged 18 yards on four returns, none of them longer than 21.

They’ll have to step up in the same way against the New England Patriots. Dion Lewis had a 98 yard kick return touchdown in their win over the Houston Texans. He might not have Hill’s name value but the Patriots’ special teams unit is nearly as strong.