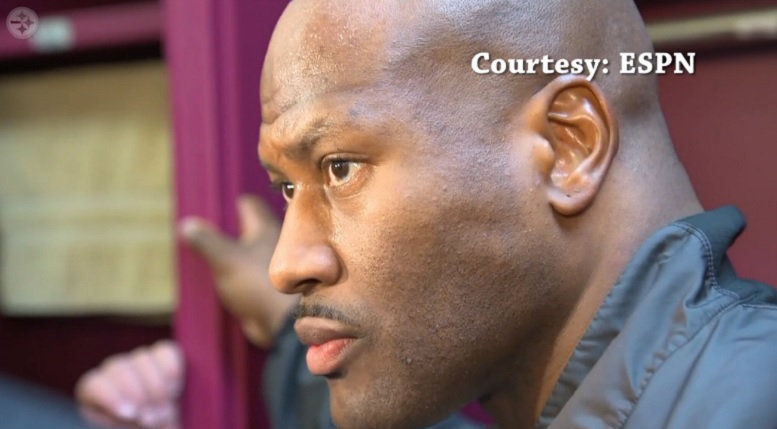 It was a valiant run, but the Pittsburgh Steelers got out-played in every phase of their AFC Championship game against the New England Patriots. While several might speculate that Sunday night might possibly be the last time Steelers fans see linebacker James Harrison play in an NFL game, the 38-year-old made it clear to reporters in the team’s locker room that he doesn’t believe he’s played his final snap.

“I’m not done,” said Harrison, who took over as the Steelers every-down right outside linebacker after the team’s loss to the Dallas Cowboys in Week 10. When asked again about him possibly playing in 2017, Harrison left little doubt that he intends on playing another season.

“Like I said, I’m not done,” reiterated Harrison. “I feel physically fine.”

Say the name James Harrison and what comes to mind? His no-nonsense attitude? His grudge against NFL Commissioner Roger Goodell? What about him setting the Steelers career record with 81.5 sacks? While he may not be considered a first-ballot Hall of Famer by many, it’s obvious that in the Steelers locker room Harrison has the respect of his peers. Not only for his on the field play but for who he is off it.

Harrison’s approach to the game is a rarity. In a day and age where opponents are best friends and everyone gets along off the field, Harrison’s attitude is somewhat of a throwback. It’s not that he despises players on other teams, but when he takes the field, he’s all business. His friends are wearing black and gold and the enemy isn’t. It’s that cut and dry with him.

While some people have framed Harrison in a negative light due to the allegations of steroid use, the approximately $120,000 in fines he incurred during the 2010 season for illegal hits and his inflammatory comments towards Goodell as well as certain NFL players in a Men’s Journal article, most people that have spent prolonged time with the linebacker say he has a soft spot. Watch him interact with his kids or with any member of the Rooney family and the first words that come to mind are kind and respectful. He is grateful for the opportunities he’s been afforded, something that seems to be more and more rare among younger players.

Harrison had a roundabout path to success coming out of Kent State undrafted in 2002 (yes, the same Kent State that Jack Lambert went to), because he was too short and too light to cut it in the NFL. The Steelers signed him as an undrafted free agent but after the 2002 season he got cut and signed by the Baltimore Ravens to play for the Rhein Fire in the now defunct NFL Europe before eventually being cut again. For a while he considered giving up football, but he just kept working. By 2004 Harrison was back with the Steelers but only as a special teams player, because as ex-teammate James Farrior put it “He was a knucklehead that didn’t know the plays.” In 2005 he started three games and won his first Super Bowl ring.

Most people will remember Harrison for his 2008 season, when he won the NFL Defensive Player of the Year award and had a 100-yard interception in Super Bowl XLIII with no time left in the first half. Steelers fans that watched that game can still see him rumbling up the sideline in slow motion. It was the longest play in Super Bowl history at the time and it helped the Steelers win their record 6th Super Bowl, 27-23, in a classic game against the Arizona Cardinals.

Harrison grew up in a dying town in the rust belt, Akron, Ohio, I know, because I’m from there as well. He had big dreams, and had a lot taken from him; Ohio State, Nebraska and Notre Dame all rescinded scholarship offers due to an altercation where he allegedly took out a BB gun and aimed it at his high school defensive coordinator. He went undrafted, was cut multiple times and had a stint playing in NFL Europe, but never took his eye off the prize. His work ethic carried him. He took the road less traveled to the pantheon of champions and never complained, never quit, just worked hard. Isn’t that what makes him the quintessential Steeler? Sure, he has some polarizing opinions, but taking the road less traveled will do that to anyone. He had a dream, to play in the NFL, and never stopped working until he achieved it, no matter how long the road, or how hard the battle.

There are very few players cut from the same cloth as Harrison, and if he retired today his legend would live on, not only with his fans, but from coaches that want to show another generation of players what it means to “set the edge” against the run, and from a whole slew of left tackles that have to answer the question, “who was the hardest person you ever had to block?” and had the unenviable task of trying to stop him on Sundays. Ideally, they won’t have to because come next season hopefully Harrison will be donning number 92 in black and gold and will be with his teammates working towards another Super Bowl ring.

Harrison is currently scheduled to be an unrestricted free agent in March.