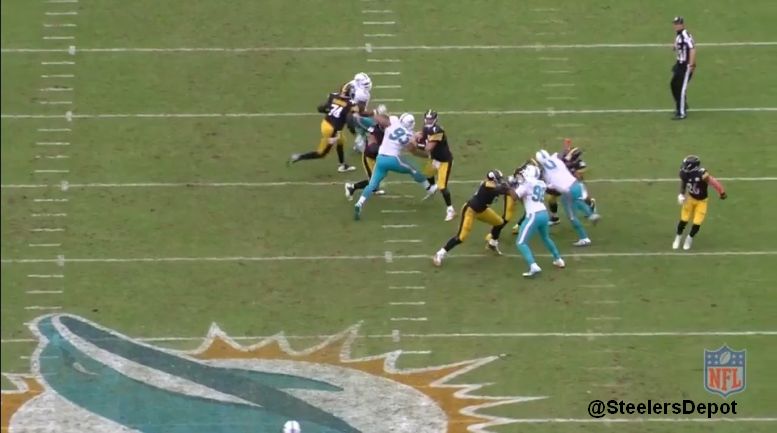 Miami Dolphins defensive tackle Ndamukong Suh has developed quite a reputation since coming into the league as many players view him to be the dirtiest player in the league. New England Patriots running back LeGarrette Blount is one of those many.

“There’s not many guys in this league like that guy. He’s a dirty player. He’s always been a dirty player,” Blount said recently in a one-on-one interview with WBZ-TV in Boston. “There’s no room in the game for that. At some point in time, guys have to defend themselves when he’s doing the things that he does.”

Blount’s comments came one day after Suh landed on the back of his legs at the end of a run during the Week 17 game between the Patriots and Dolphins. Additionally, while getting up off the ground, Suh pushed Blount.

The Pittsburgh Steelers also took issue with Suh earlier in the season as they accused him of attempting to kick quarterback Ben Roethlisberger during a pass rush in the Week 6 meeting between the two teams in Miami.

As for Steelers guard David DeCastro, who will spend a lot of time attempting to block Suh once again in the AFC Wild Card game against the Dolphins, he’s only concerning himself with Suh the player, not the instigator ahead of the contest.

“I don’t really care” DeCastro said when asked about Suh’s antics, according to Jeremy Fowler of ESPN.com. “If you can block him and keep him away, that’s the only thing I can control. If I can do that, hopefully that stuff doesn’t happen. It’s a tough job. It will be a good challenge for us.”

While the Steelers asked the league to review Suh reaching out his leg to kick Roethlisberger during the regular season meeting between the two teams, nothing ever came out of it in terms of a fine.

While the Dolphins did beat the Steelers 30-15 in that contest, Suh only registered two total tackles in that game in addition to one quarterback hit kick. The Steelers offensive line will need to limit Suh’s effectiveness once again this coming Sunday if they hope to move forward in the playoffs.

While Suh did record 5 sacks during the 2016 regular season, it was his fewest quarterback take-downs in a single season dating back to 2011, his second season in the league.