In an era where running backs are clouded with split duties and treated like a ‘dime a dozen’, the Pittsburgh Steelers have done the complete opposite. With a running back like Le’Veon Bell at their disposable, the Steelers have good reason to not be believers in split duties. It would seem absurd to take away carries from arguably the top back in the league, but has the team pushed Bell just a little bit too far?

Here is the list of running backs who have exceeded 20 attempts per game since 2011. The year 2011 is significant because that is when the new CBA was installed, which severely cut back what could be done in offseason training camps and cut back on padded practices. Perhaps there is a chance that since the workload got lighter, many backs are not ready to handle a heavy workload during the season. 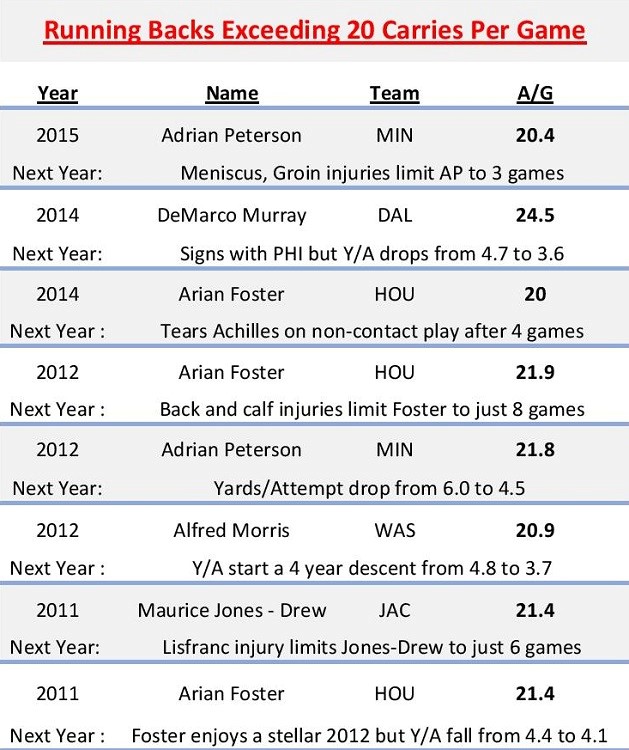 As the chart above notes, there have been eight cases in which a running back has exceeded an average of 20 attempts per game since the new CBA in 2011. What is a cause for concern among these eight backs is that the next year progression of these backs all show some sort of a decline or injury. Four of the eight backs went on to have injury riddled seasons the following season while another three saw a significant drop in their yards per rushing attempt figure.

While Bell being a part of the haunted 20 attempts per game club is one reason to be concerned for the soon to be franchised running back, there is another element putting Bell at an accelerated risk for injury.

Bell’s groin injury suffered against New England Patriots could already be a sign of things to come if the Steelers do not relieve their heavily worked back. It will be interesting to see what the Steelers do with Bell surrounding his contract situation this offseason. If they intend to keep Bell long term, it would be in their best interests to reduce his carries. But if the Steelers intend to let Bell play the following season on the franchise tag, there is a possibility that he sees a historic workload yet again.