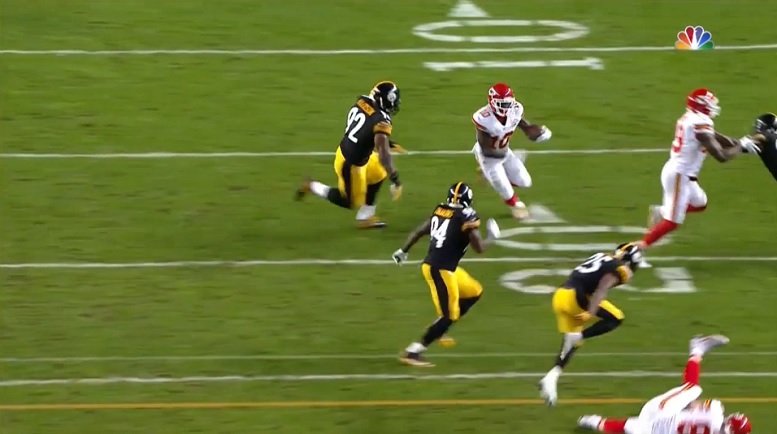 The Pittsburgh Steelers defense will be faced with several challenges this coming Sunday in their Divisional Round playoff game against the Kansas City Chiefs and leading that list of players they’ll attempt to limit is wide receiver Tyreek Hill and tight end Travis Kelce.

During his weekly interview with Missi Matthews of steelers.com on Steelers Nation Radio, Butler was first asked about Hill, who caught 61 passes for 593 yards and 6 touchdowns during the regular season in addition to carrying the football another 24 times for 267 yards and three touchdowns

“Very fast young man,” Butler said of Hill, who also returns punts and kickoffs for the Chiefs. “We played against him in the first game and he got a little what we call a jet sweep on us. We did a good job of containing him there and Lawrence [Timmons] hit him pretty good there on the sideline, but he’s been very productive since then. A very fast guy, one of the faster guys in the league. He’s got a lot of speed and we’ve got to contain him.”

In the Steelers Week 4 game against the Chiefs their defense held Hill to five receptions for 24 yards and a touchdown. That score, however, came with 11:11 left in the fourth quarter and the Chiefs trailing 36-0 at the time. As for the jet sweep that Hill and the Chiefs attempted in that game against the Steelers that Butler referenced, it resulted in a loss of 2 yards and you can see the end zone view of that play below.

The Chiefs will undoubtedly look to get the football in the hands of Hill even more in Sunday’s rematch and it will be interesting to see if the Steelers defense can once again contain his explosiveness. It will help that linebacker Ryan Shazier and safety Sean Davis will play this time around as both players failed to play in the first meeting between the two teams.

As for Kelce, who led the Chiefs this season in receptions (85) and receiving yardage (1,125), the Steelers defended him several times with cornerback Justin Gilbert in the Week 4 game between the two teams and Butler was asked by Matthews this week if there’s a chance we’ll see a similar approach this coming Sunday in Kansas City.

In the Week 4 game between the two teams, Kelce registered five catches for 23 yards and a touchdown. His scoring catch, however, came with four seconds left in the game.

If the Steelers defense can once again limit the production of both Hill and Kelce on Sunday it will go a long way in helping producing another win against the Chiefs. The Chiefs offense produced 58 plays of 20 yards or more during the regular season and Hill and Kelce combined to have 26 of them even though both failed to register any in the Week 4 game against the Steelers.