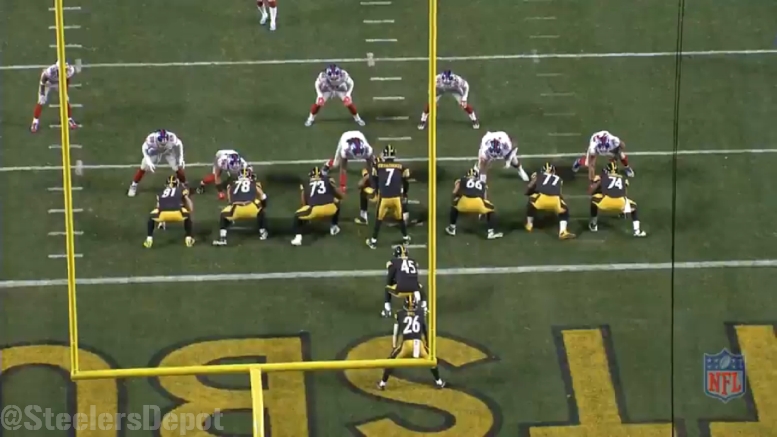 I have yet to do the charting for the Pittsburgh Steelers’ loss to the Patriots during the AFC Championship game, but one thing I can tell you for certain is that they continued to move away from what had been working for them for the post few months—which is a fact—and that they probably would have been better-served not doing that—which is my opinion.

What might that be, exactly? During the first eight games of the Steelers’ nine-game winning streak, they began to make versatility and personnel flexibility a key feature of their offense. Instead, for the past two games, they ran for the vast majority of the game out of the 11 personnel.

Now, just to be clear, that is far from entirely unjustified. After all, they did spend quite a bit of the game trailing, and, by the late stages, were trailing substantially. The fact that Le’Veon Bell left the game by the end of the first quarter did not help matters either.

But with 69 official offensive plays run, Roosevelt Nix, their fullback, played only two snaps. I should point out that neither of those two snaps was a play on first and goal from the one-yard line. Extra lineman Chris Hubbard, who had been seeing action on almost 25 percent of their snaps for the past couple of months, only saw two snaps on Sunday after logging only four in Kansas City.

As far as extra tight ends go, David Johnson and Xavier Grimble combined for just 11 snaps. Factor in the fact that Jesse James also came off the field for two snaps, and you have, at best, 15 total snaps that the Steelers executed with fewer than three wide receivers on the field, or well less than a quarter of their total snaps.

As I wrote above, however, it was not just about the lack of variety in personnel, as when teams are trailing, or run out of the no-huddle, they tend to rely more upon three-receiver sets. But the fact that even situationally they were inflexible in adapting to run-heavy formations was a concerning change of pace from what had gotten them this far.

I cannot for the life of me understand why for the past two  games the Steelers’ offensive brain trust thought it wise to put their faith in a couple of wide receivers who had pretty much never played in the NFL prior to this season rather than dividing the load more evenly from other position groups.

Even with Bell out, I still think that it would have made sense to add more versatility in their formations, and the fact that it happened two weeks in a row—under even less sensible circumstances the week prior—raises even more questions. Why did they move away from what had been working for so long?