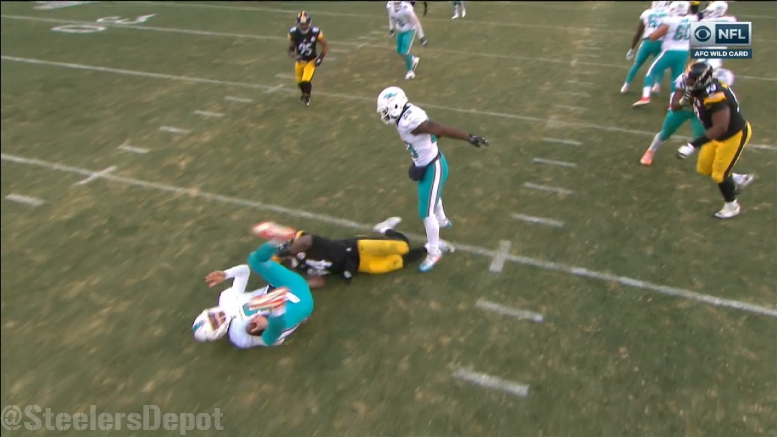 The Pittsburgh Steelers had an awfully hard time getting the quarterback on the ground in the early portions of the season. Over the course of the first three games, in fact, they recorded just one sack, and that was on a scramble that was officially a loss of zero yards.

They did get four—three of them from Cameron Heyward—in their commanding 43-14 victory over the Chiefs in Week Four. The Chiefs, of course, are the Steelers’ next opponent for the Divisional Round. After three sacks the following week, they were shut out in Miami against the Dolphins. In all, they had just 13 sacks in their first nine games.

In their final seven games of the regular season, however, they led the league with 25 sacks, and that continued into the postseason, in their rematch against the Dolphins. The Steelers brought down quarterback Matt Moore five times over the course of the game, which is tied for the most sacks they have recorded in a playoff game since sacks became an official statistic in 1982.

That information came courtesy of Ryan Scarpino, a member of the Steelers’ communication staff, who Tweeted that information in the hours after the game. the Steelers recorded three sacks last year in their victory over the Bengals, but had just one sack against the Broncos the following week.

In their two playoff games prior to that—both Wildcard Round losses, the Steelers managed just one sack against the Ravens in 2014, and none against the Broncos, in an overtime loss, in 2011. During their 2010 postseason run, they recorded 10 total sacks.

Five of those sacks came in the Divisional Round game against the Ravens. James Harrison had three sacks in that game, and LaMarr Woodley and Ziggy Hood added the other two. That was the most recent occasion in which the Steelers registered five sacks in a playoff game.

They also sacked Peyton Manning five times back in 2005, with the bulk of that damage coming from James Farrior and current outside linebackers coach Joey Porter. So the last two postseasons in which they posted a five-sack game, they went to the Super Bowl.

While they did manage to record four sacks several times over the course of their extended postseason history, they have registered five sacks in a playoff game just those three times—with Harrison featuring prominently in both, getting three in that one game, and a sack and a half—including a strip sack—yesterday against the Dolphins.

If you include the postseason, the Steelers have now recorded a total of 30 sacks over the span of their last eight games for this season, all of those resulting in wins. They didn’t even have half that number in their prior nine games. If there is one single statistic to compare and contrast the first half of the season to the second, that might be the most significant.