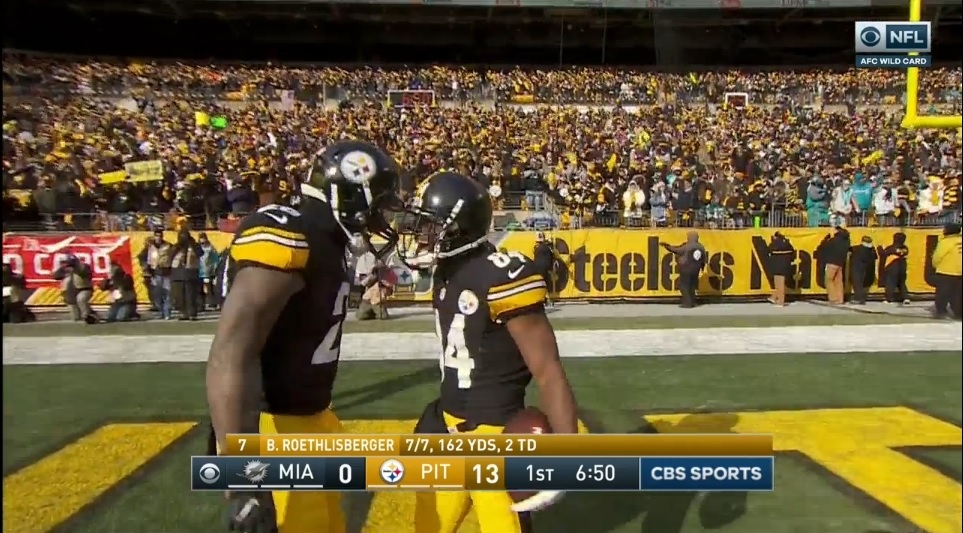 Great win. Nothing weird about it. But I loved it.

– Starting with the score. Only the seventh 30-12 final outcome in NFL history and the first in playoff history. The last such game was November 6th, 2011 when the Houston Texans beat the Cleveland Browns. That score happened twice that year and once in 2008.

– As you probably know, Le’Veon Bell broke Franco Harris’ franchise record for rush yards in a game. Bell finished with 167, surpassing Harris’ mark of 158. Harris did that in the Steelers first Super Bowl, a 16-6 win over the Minnesota Vikings.

It’s also the most rushing yards by a running back, on any team in a playoff game, since Cedric Benson in 2010. Benson went for 169.

– Antonio Brown’s 124 yards receiving is tied for the 6th most in Steelers’ playoff history.  And his two touchdowns ties the most in a game, joining John Stallworth (twice), Lynn Swann, and Hines Ward.

Brown is the first to ever have a 120 yard, 2 touchdown game in Steelers’ history.

– Ben Roethlisberger threw two touchdown passes with 15 or fewer completions for the fourth time of his playoff career. But it’s no surprise the other three came early in his career, all happening between his 2004 and 2005 seasons.

Terry Bradshaw did it five times in his playoff career.

– Lawrence Timmons is the first Steeler to have two sacks in a game since James Harrison in 2011. He’s the first non-outside linebacker to do it since Brett Keisel in 2006.

– Ryan Shazier is the first LB to pick off a playoff pace since James Harrison’s Super Bowl sprint in 2009. In the Mike Tomlin era, he’s the third linebacker to do it. He, Harrison, and James Farrior in 2008.

– Chris Boswell has made eight straight field goals to begin his playoff career.

– The Steelers had the ball for under 28 minutes today. First time that’s happened, win or lose, since Super Bowl 40. They are 4-2 in such games in franchise history.

– The Steelers had a 10 play drive today, consisting of nothing but run plays, and ending in a touchdown.

It’s the first such drive, playoffs or regular season, the Steelers have had since as far back as such data goes, 1999. They’re the first team to do it in the NFL since the Atlanta Falcons had 11 in 2010.