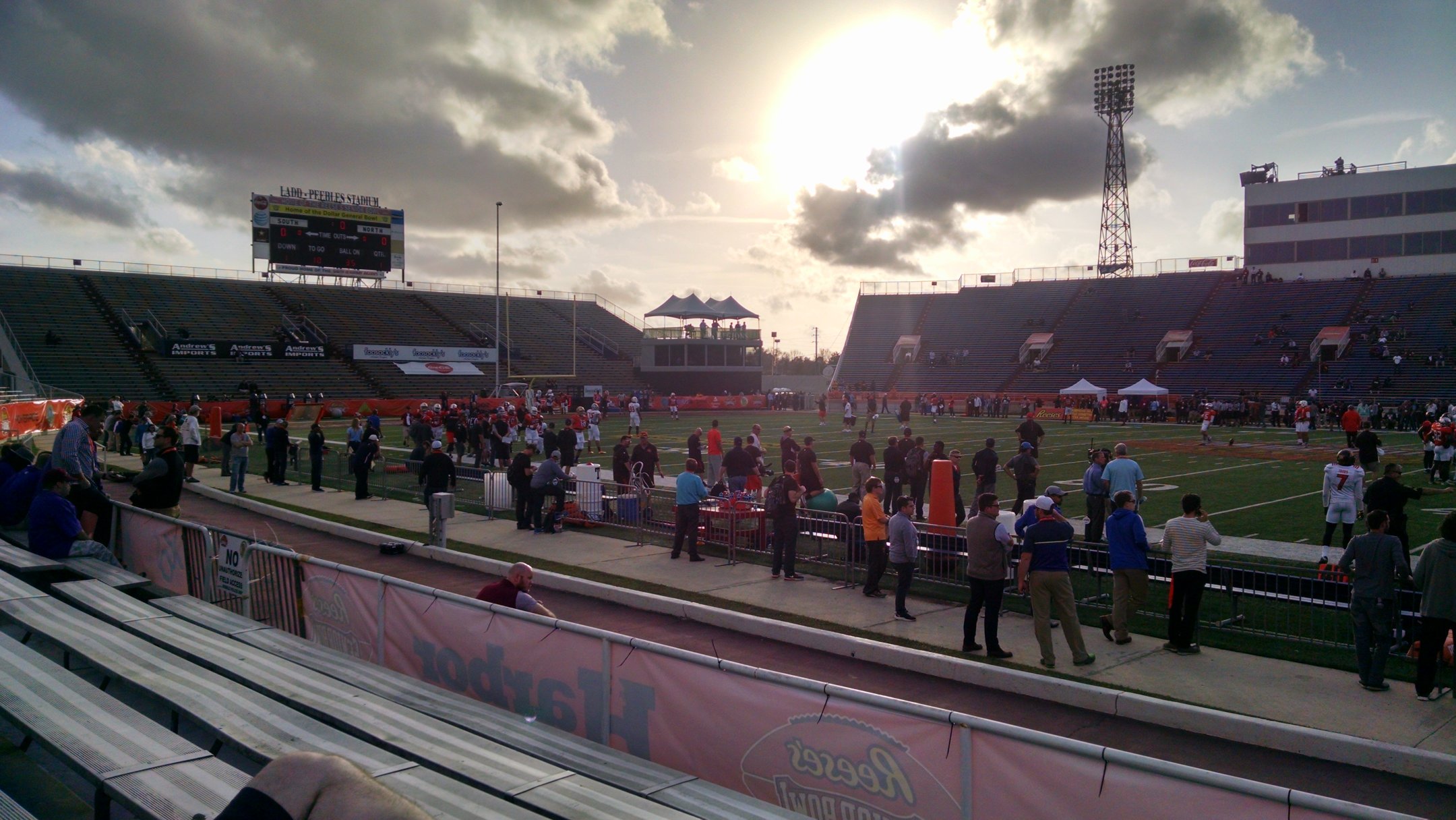 Wrapping up our Senior Bowl coverage from a great week down in Mobile. Want to thank you all so much for following our coverage during the week and those who helped donate to the trip. You guys rock. Want to also thank our sponsor for the second year in a row, the fine folks at Touring Plans. Be sure to check them out for your all your Disney info needs.

Like we would do after a Pittsburgh Steelers game, we’ll fall back to a winners/losers list from this week. Let’s jump in.

Haason Reddick/OLB Temple: The best player of the week, to me. He kicked inside, a position he has never played before, and excelled there as much as he did when lined up on the edge. Wins with speed and the ability to corner and get to the QB. Coverage ability is excellent and he has as much range as anyone of the group. He’s going to kill it at the Combine and that’ll only help his stock.

Derek Rivers/OLB Youngstown St: Another pass rusher who helped himself. Good punch and hand placement as a pass rusher who can win with speed and a little bit of power. Set the best edge of any EDGE rusher this week, too. Small school guy from YSU so if the Steelers have interest – and early indications are they do – you’ll hear more about it.

Ryan Switzer/WR North Carolina: The best receiver in Mobile. Nuanced route runner and at a different level in terms of the ability to separate than anyone else. It’s not just because he’s small. That makes him quicker but he uses his entire body to sell the route and get the CB to outleverage himself. He has a good pair of hands and can run every route, even catching a fade on the final day of practice. Energetic player too and that’s always a bonus.

Corey Clement/RB Wisconsin: It was tough to get a feel for him in live practices but watching the All-22, you can see how great his feet are. Jumps in and out of the hole with lateral quickness I don’t know if anyone else had. And overall, he’s a vertical runner who can get separation on routes – again, thanks to his quickness – and holds his own in pass protection.

Kareem Hunt/RB Toledo: Decent week of practice but impossible not to include him after the monster game he reeled off. Burst and ability to get skinny through the hole while having contact balance that, to me, is as good as anyone’s in this entire class, Senior Bowl or not.

Evan Engram/TE Ole Miss: Didn’t get a ton of catches but made them count. One grab down the seam, defender trailing and grabbing it away from his frame sticks out in my mind. He got his weight up, coming in at 237 as opposed to 225 listed, and has big, ten inch hands. Better blocker than people expected, too. A possible replacement for Ladarius Green. Similar traits.

Taylor Moton/OT Western Michigan: I know you probably aren’t too interested in hearing about offensive linemen but Moton was the best one this week with Troy’s Antonio Garcia just trailing him. He’s a big body, 6’5 330, with length and hand size, and is just tough to move. Great feet too and moves down the line well on zone blocking schemes. Sorta reminds me of, and I know this guy is a guard, Brandon Brooks. Big guys with great feet.

Chris Wormley/DE Michigan: Classic five tech with a surprising first step and violent hands. Club/rip is his go-to, and sorta only, move in his toolbelt. But it worked time and time again. May go too early but would fit what the Steelers look for.

Jordan Herdman/ILB Simon Fraser: Small school guy who wasn’t deterred by how “big” the moment was. Undersized, doesn’t even clear the 5’11 mark with sub 30 inch arms, which is going to hurt him in the “threshold” categories, minimums players need to hit to have a reasonable chance for success. Get beyond that, however, and you have a guy with some big-time talent.

Zay Jones/WR East Carolina: A good week of practice followed up by a fantastic game, one where he should’ve been the MVP but was snubbed. Jones has all the tools. Speed, size, and most importantly, the ability to separate. He also had the best hands of anyone here and made some spectacular catches during the week, especially in the game, showcasing the ability to catch away from his frame and adjust to poorly thrown passes. In all, thought he was the 2nd best receiver of the group.

Chad Williams/WR Grambling: He only did one thing this week but did it well. Williams was the top vertical threat this week and you can make a lot off money by running faster than anyone else. Has off the field baggage but had a fantastic senior season and looked good against better competition this week. That’s critical.

Cameron Sutton/CB-S Tennessee: Listing him as a corner first but he played as much safety down in Mobile. Did both well even though he hadn’t played safety in his college career. Quick-twitch athlete with a high football IQ and willingness to support the run. Fits the Steelers well and they have interest.

Lorenzo Jerome/S St. Francis (PA): Didn’t see much of him during practice but man, he played his best football in Saturday’s game. Three turnovers, two interceptions and a forced fumble, for a small-school kid who balled out. Hard to ignore him now. Dude is a playmaker. At 5’10 202, he has the size, too.

Dion Dawkins/OG Temple: Versatile player who spent most of his time with the Owls at tackle but primarily kicked inside to guard this week. Compare him some to B.J. Finney. Dawkins is much bigger and longer, and that alone will get him drafted over Finney, but they are versatile players with great core strength and the ability to anchor against bullrushes. Solid week.

Sefo Liufau/QB Colorado: From the people who watched them closely, and my general observations, the worst QB of a pretty poor group overall. Play that sticks out is an attempted throw in the flats that bounced three yards short. He got a couple snaps but don’t think he threw a pass in the game. Probable he’ll be undrafted.

Corn Elder/CB Miami (FL): A guy I liked on tape, and of course still do, but his week wasn’t very notable. Struggled to make a play on the ball and didn’t look great in man coverage, having trouble staying in-phase with receivers.

Adam Bisnowaty/OT Pittsburgh: Sorry for the Pitt fans who I am sure floating around on here. He was pretty terrible at tackle and guard, the latter where he lined up on Day Three of practice. On the ground all the time, a cardinal sin, unable to match speed rushers upfield, and while he showed the ability to redirect defenders as a run blocker, it isn’t enough. I think NFL Draft Scout had him as a 2nd to 3rd round pick but if you took this week in a vacuum, you wouldn’t have someone you could draft.

Zach Banner/OT USC: Biggest dude on the block, 6’8 361. But one of the worst on the block, too. Just too big to move and he should continue to try and shed weight to get quicker laterally. Easy to figure out how to beat him. Run around him. And many did.

Desmond King/CB Iowa: I want to like King, and still kinda do, but I am disappointed he didn’t show more physicality in press man. And his ball skills weren’t anything special. Not a terrible week, to be clear, but he got lost in a mix of corners who outshined him.

Taywan Taylor/WR Western Kentucky: Guy who had a lot of buzz heading into the week but I, as someone who knew very little about him coming in, wasn’t impressed. Dropped a couple passes, didn’t get great separation, and I don’t see any special traits with him. Just a guy and probably something like the 7th or 8th best receiver I watched.