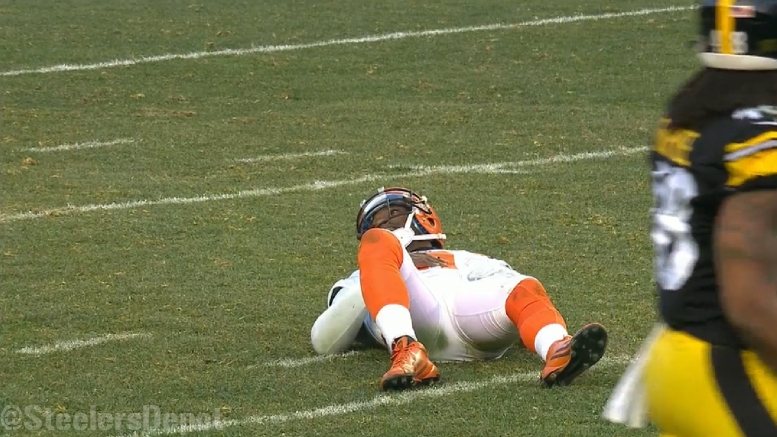 The Cleveland Browns, no matter how the game would have ended yesterday, had a rather Cleveland Browns sort of day. They put up a fight throughout the game against the Pittsburgh Steelers, even jumping out to an early 14-0 lead, and then scoring a field goal to start the overtime period, but still managed to lose, and in doing so, they locked up the first-overall draft pick for the 2017 NFL Draft.

They nearly got the win—and lost the top pick—late in regulation when a 43-yard pass set them up with first and goal from the five-yard line, only to see running back Isaiah Crowell fumble the ball at the three-yard line, courtesy of backup outside linebacker Jarvis Jones, the only player on defense who was playing due to the decision to rest somebody.

The Browns only narrowly avoided a winless season when a late blocked field goal against the Chargers a week ago preserved their 20-17 lead late in the fourth quarter. But they still concluded their first campaign under the latest regime spearheaded by Head Coach Hue Jackson with a 1-15 record, the worst record in the league.

While they did not manage to join the Lions as the only ‘unfeated’ team in the 16-game era, they may still be in the discussion for the worst team of all time, as the Lions in that season were often significantly more competitive than this Cleveland team proved to be, and found more spectacular ways to play leads and lose games.

Incredibly, the Browns in 2016 not only allowed their quarterbacks to be sacked a total of 66 times over the course of the year, averaging four and a quarter sacks per game, they allowed a total of six different pass-throwers to be sacked, including three who were sacked at least 18 times. In five games, Robert Griffin III was sacked 22 times.

On the flip side, the Browns only recorded 26 sacks all year. Their defense ranked 30th in points allowed and 31st in total yards allowed, while the offense was 31st in points scored and 30th in yards gained. But that, of course, shouldn’t be too surprising for a team that narrowly one won single game all year.

While it did drag on one extra day, their misery of 2016, however, is finally behind them, and they can soon begin to prepare for how to rebound and get their ship sailing on the right path. They do believe that they have the right regime in place. It’s just a matter of putting the right team together and coaching it up.

Having the first-overall draft pick will help, as will the many other high draft picks that they have accumulated via trades over the course of the past couple of years. I would imagine that the biggest intrigue following them is whether or not one of those high picks gets used on a quarterback, and what Griffin’s future is with respect to the starting lineup.