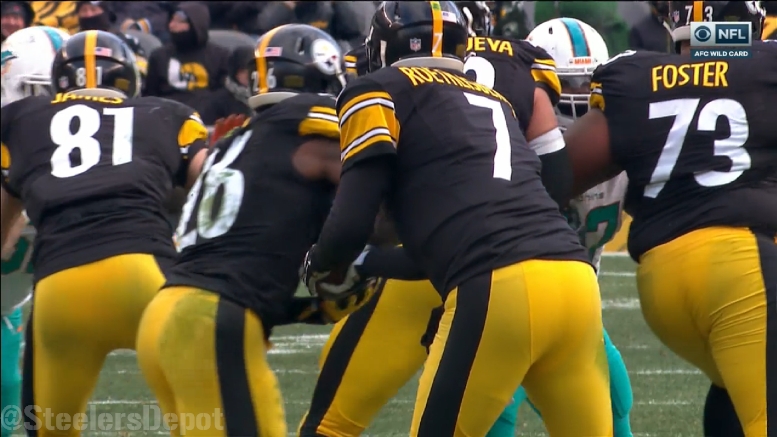 When the Pittsburgh Steelers offense took the field in the first half against the Dolphins on Sunday, it was almost like clockwork. Ben Roethlisberger, Le’Veon Bell, Antonio Brown, and the offensive line pretty much dominated a quality Dolphins defense—though absent a few starters—and were able to secure a commanding lead by halftime.

Things kind of dried up after that point, however, and, in fact, a bit earlier than that, and that is a fact that Roethlisberger and his group are perfectly aware of—and working on addressing and fixing by the time they take on the Chiefs in Kansas City on Sunday.

Chris Harlan wrote for the Pittsburgh Tribune-Review that Roethlisberger said the passing game “lacked a little detail” in the second half, saying, “I think we can be better”. He continued, saying, “I think it’s a little bit of a false positive, if you will, because you start out so well. We went down and scored the first three series, and you’re kind of doing whatever we wanted to”.

The Steelers had little trouble marching up and down the field early on, starting out with an 11-yard run by Bell on the first play of the game. The opening drive ended with a screen pass to Brown that he took for 50 yards and a score.

The second drive followed a similar line—which started all the way back at their own 10-yard line, I might add—with a good run, a third-down conversion, and then a long catch-and-run from Brown, this time a 62-yard score.

On the third drive, with the safeties pressed back, the Steelers rode Bell on a 10-play, 10-carry drive that ended up with Bell in the end zone. After a missed extra point, it was 20-3, and the offense looked like it would be able to do whatever it wanted with nearly three quarters to play.

Their final drive of the quarter was not so bad in the beginning, either, but it ended poorly. Roethlisberger nearly threw an interception to a nose tackle dropping into coverage, and then a few seconds later, Brown let a high pass bounce off his hands for a drop, and into the arms of a defender for an interception.

The second-half offense was not nearly as crisp as they were early in the game. “I don’t know what it was”, Roethlisberger said, “but it will be addressed this week”. He added that “addressed” sounds “so harsh”, and clarified that “we will talk about it”.

One might be inclined to think that the offense got comfortable sitting on a substantial lead early in the game that led to some more lackadaisical performances in the second half. The Steelers did score 10 points in the third quarter, but both of them came off of shorts fields due to defensive turnovers.

And the touchdown that they scored even came from the benefit of the Dolphins jumping offside on a field goal attempt. Bell eventually scored from eight yards out on third and five on a drive that started at Miami’s 25-yard line.