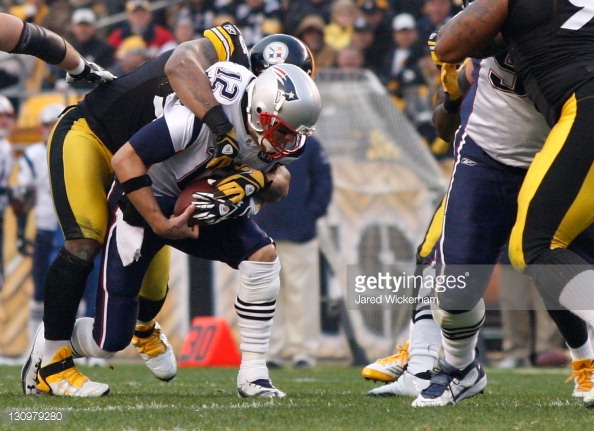 There has been lots of talk over the course of the past week about a game that took place more than five years ago. It was Hallow’s Eve, 2011. The last time that the Pittsburgh Steelers defeated the New England Patriots.

The reason it has been talked about so much goes beyond the mere fact that it represents the last time the Steelers were able to dethrone their greatest nemesis. It is because of the belief that the victory was contingent upon the defense adopting a man-coverage scheme as a change of pace to shut down Tom Brady’s rhythm passing.

So what exactly happened in that game that allowed the Steelers to win? What did they lack on Sunday that they had six-plus years ago? Many have weighed in. Bob Labriola posited that it was the Steelers’ ball-control offensive efforts that best explained what happened.

He’s partly right. Partly. The Steelers controlled the ball for nearly 40 minutes in that game. But that doesn’t account for some natural imbalances. The Patriots had an eight-yard touchdown drive that encompassed about 30 seconds after their defense recorded an interception.

It’s true that the offense went on a number of extended drives and possessed the ball quite well. But to deny that the defense played a role in what happened is to deny the full picture of the realities of the game.

Labriola cited some of Brady’s basic statistics. He completed nearly 70 percent of his passes. His quarterback rating was over 100. He went two-for-two in the red zone. The Steelers went just two-for-five in their trips inside the 20.

He left off the fact that he averaged just 5.6 yards per pass attempt. Or that the Steelers brought Brady down three times in key situations throughout the game. LaMarr Woodley brought him down twice. One came on third down. The other was on first down as the Patriots were driving at Pittsburgh’s 30.

Oh yeah, and it was a 23-17 game with 19 seconds to play when Brett Keisel sacked Brady yet again. The ball sputtered loose and rolled through the back of the end zone for a safety.

Did man coverage play a role? I would say so. Cortez Allen was covering Rob Gronkowski on third and eight when the rookie cornerback was able to drag the talented tight end down following a seven-yard gain and forced New England to punt.

That is the most obvious example that I can come up with off the top of my head. The Steelers forced him to check down to his running backs multiple times on third down as well to force punts. The Patriots went three-and-out twice in the eight drives prior to the final safety.

We’ve all been trying to stroll back through memory lane after Sunday’s loss to remind ourselves what it was like to beat the Patriots. It’s been a long time, after all. But it would be best to supplement our memories with the actual facts of the matter.