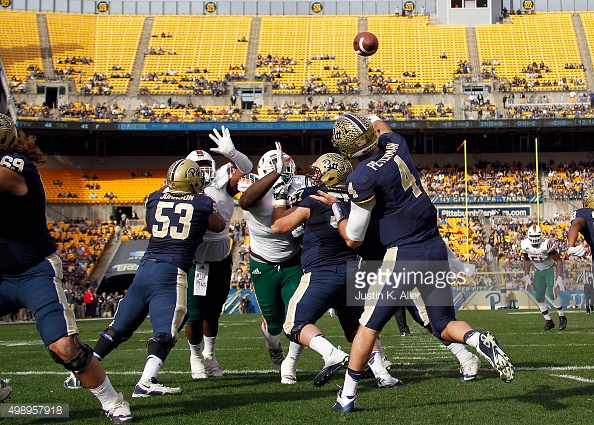 Despite a talented group with several positions that are genuinely deep, there aren’t any Senior Bowl quarterbacks generating much buzz. There’s no Deshaun Watson. And Mitch Tribusky and DeShone Kizer are juniors, rendering them ineligible for the week.

Pittsburgh’s Nathan Peterman will look to change that narrative over the next week.

Phil Savage, the head of the Senior Bowl and man who invited him, thinks he’s coming in as the best quarterback of the six. In yesterday’s opening press conference, he said there’s a “golden opportunity” for Peterman to capture attention and create some buzz about him heading into the thick of NFL Draft season.

He had a strong senior year, throwing 27 touchdowns to only seven interceptions while helping to lead the Panthers to some thrilling victories.

“It was fun,” Peterman said at yesterday’s opening press conference. “It was what we wanted. Obviously, we had some goals we didn’t reach. We wanted to win an ACC Championship so we fell a little short there. But we had some big games, beating Clemson, beating Penn State. They were really fun and great to be apart of. Just an awesome last season, senior season for me, and I’m thankful for it.”

Of course, that doesn’t mean that his career hasn’t come without its turbulence. He began his career at Tennessee, spending 2013 and 2014 with the Volunteers and seeing limited action. He then transferred to Pitt, grabbed the starting job, and never looked back. There was a struggle adjusting and adapting but in a nutshell, that’s the nature of the jump to the NFL. Maybe that just makes Peterman, who played for three different offensive coordinators, all the more prepared.

Chalk up being in the same facility as the Pittsburgh Steelers as just another advantage. Peterman talked about the impact working alongside NFL players has had on him.

“I’m seeing the Steelers every day. In the parking lot, in the field. I got to walk by them to get to our practice. Getting to watch them practice at the same time. Seeing their work ethic, their habits, and what makes them great.”

“In the offseason, it’s pretty great. Getting to throw routes. Ben Roethlisberger is coming up right behind me, giving me some tips.”

That connection could be an obvious fit in with Kevin Colbert. The Steelers would know better than anyone about Peterman’s makeup and ability to play in the NFL.

NFLDraftScout currently has Peterman as their 6th ranked quarterback and projected to go in the 4th round, though that’s obviously a fluid “grade” so early in this process. By the end of this week, if Peterman can string together a couple of strong performances, he could wind up being a Day Two pick.

Be sure to thank and check out our sponsor TouringPlans.com as we cover the 2017 Senior Bowl.