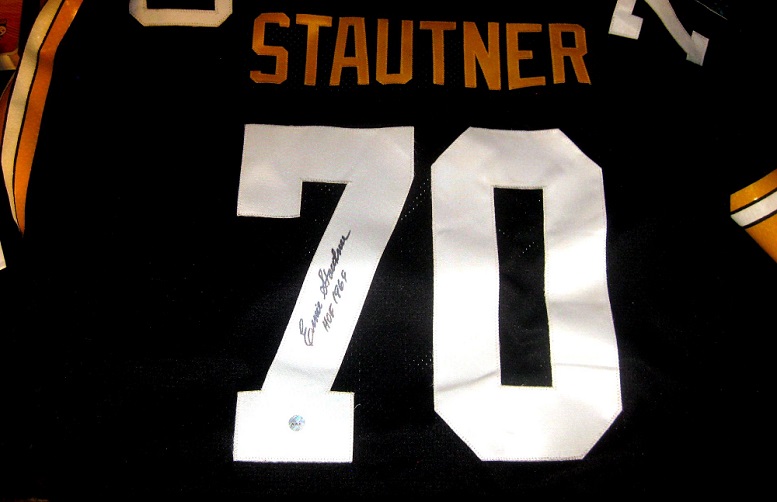 Being an average Steelers fan, I take an interest in past, present and potentially future players donning the Black & Gold. The 2016 edition of the Pittsburgh Steelers has become a part of the Steelers legacy. Head Coach Mike Tomlin conducted exit interviews with players & coaches who have packed up and left the building. In the coming weeks, there will be countless articles on draft prospects, free agency, the salary cap, and speculations on who is returning & who is not. By this summer, we will have a 90-player roster that the 2017 Steelers edition will be carved out of, but this is a look in a different direction.

I was inspired by Dave Bryan and Alex Kozora who published their ranking of the top 100 players in Pittsburgh Steelers’ history last July. It was an impressive display of research & knowledge. While their lists had a lot of similarities and both agreed that Joe Greene was the # 1 all-time Pittsburgh Steeler; there was also several variations in ranking and players that made one list and not the other. Now the average Jaguars or Bengals fan may have trouble listing the top 25 players in their respective franchises but here there was keen competition to make the top 100.

My all-time favorite Steeler is Ernie Stautner.  Alex ranked Stautner at # 25 and Dave put him at # 43. Their combined list put him at # 30. The only player to have his number retired until Joe Greene’s 75 was put away in 2014. Ernie is in the Hall of Fame and a 9x pro-bowler who can’t even crack the top 20. I was also curious on how Ben Roethlisberger, Antonio Brown & Le’Veon Bell stacked up against these great Steelers. So, I decided to create my own list of top 500 all-time Steelers.

Last year, I ranked about 530 current & former players through the 2015 season. My primary references are the Pro Football Reference website and the Pittsburgh Steelers Media Guide. There were a few glaring omissions so this year I dug deeper and have identified 1,468 Steelers who have played at least one game wearing the Black & Gold. So, my list is basically the top third Steelers.

I don’t have the football savvy of Dave or Alex so decided to set up a spreadsheet that is intended to compare Steelers by their relative contributions as players – not potential. It’s flawed but by choosing categories that can be gleaned from the record books it made the task easier if not perfect. My subjectivity came into the categories chosen and their weighting. But I just enter the numbers and the results speak for themselves. As it is updated, current players will climb up the rankings; some players may lose ground as new records are set. James Harrison got extra value by becoming the all-time Steelers sack leader this season. Last year, I had Deebo ranked just behind Greg Lloyd. The Silverback leapt ahead of Greg after this year’s accomplishments.  Retired players may get a bump by getting special recognition such as getting into the Hall of Fame. Kevin Greene’s induction skyrocketed him into the top 100 even though he only played three seasons in Pittsburgh. My hope is that someday a Steeler player will be such a dominate player that Joe Greene will be supplanted at the head of the list– now that would be quite a contributor.

Steelers who played before 1972 have a tougher time getting recognition due to several factors: only one play-off game between 1933 and 1971 (1947); less games per season: 10-12 up to 1960; 14 from 1961-77; and shorter careers. Also, some of the potentially best Steelers in the early years only played one to four seasons and then either left the NFL (Byron ‘Whizzer’ White) or were traded (‘Bullet’ Bill Dudley, Len Dawson) or came to the Burgh after playing several seasons for different teams (John Henry Johnson, Gene ‘Big Daddy’ Lipscomb, Bobby Layne).

To compare the Steelers relative contributions as players; I selected three categories:

There are 44 subcategories within the 3 major categories that a player can accumulate points throughout their career and after.

I am not a statistician or mathematician so there is probably a better way of doing it; but I’m just an average Steelers fan so these rankings boil down to my perspective. I hope to revise it again to see how the 34 current players who are highlighted progress in the rankings and whether some of the younger ones like Artie Burns, Sean Davis & Javon Hargrave will make it next year Perhaps you will see some names from Steelers past that will be a bring a smile to your face. Just as likely, there are a few names on here that you’d like to forget ever wore the Black & Gold. Maybe there is someone you think is missing that should be included. In any case, I hope you enjoy perusing the list.