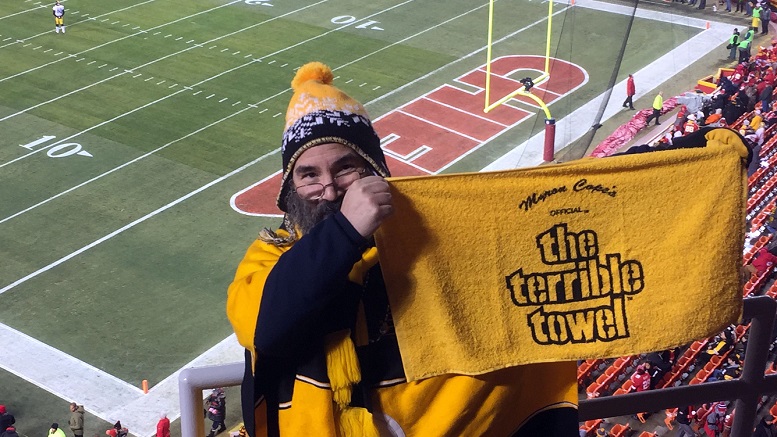 Right now, this part of the article is being written Sunday morning with kickoff nine hours away. I did decide to drive out to the game from the Washington DC area. Just over one thousand miles. An old college buddy agreed to go and drove down from the Lehigh Valley Thursday night so we could get a good start Friday morning. Had already bit on tickets up in section 340 just before the prices started dropping due to the dire weather forecast. The plan was to drive about 600 miles, find a place to crash then get to Independence, Missouri some time Saturday afternoon.

Once on the road; driving through the NFL purgatory of central Ohio with highway signs pointing to Cleveland & Cincinnati; we decided to keep driving until we hit weather and then hole up. Gassed up in Indianapolis with Lucas Stadium in sight; a local fan there yelled, “the Steelers are going down!”; I replied; “Yeah they are; going down to Houston!” He had to chuckle at that; poor Colts fan. Originally, the shortest route had us taking Interstate 70 straight to KC; but my interactive navigational app routed us North. My buddy saw precipitation on his weather radar (aren’t these smart phones magic?) showing heavy precipitation just below us with temps right at 32 degrees. Miraculously, our path remained bone dry until 38 miles from our destination. Roads well treated but as we passed Arrowhead Stadium started to see vehicles in ditches. Luckily, we made it to the hotel and checked in a night early. One thousand miles in 16 hours.

Got a few hours of rack time; woke up by the scrunch of ice scrapers scraping ice off windshields. Only planned activity of the day was to go to Callahan’s on 87th where Steelers fans were to gather. Rally time had been pushed an hour earlier and we got there extra early – place was already packed full – SRO. What a great time; lot of Burghers of course; but met Steelers fans from Oklahoma, Minnesota, California, Texas, Missouri, Kansas, New Jersey, Georgia … met one girl that had driven up from Texas with her boyfriend.  Asked where she was from and thought she said, Oliver. Oliver, Texas? Never heard of it. No, she shouted over the din; I’m from All Over! Born in Australia, lived in Germany, Connecticut, Texas – never Pittsburgh but somehow became a diehard Steelers fan. Here we go!

Tunch Ilkin, Craig Wolfley, Missi Matthews were all there but it was a nice enthusiastic loud crowd. The other AFC playoff game was on – the Texans never had so many fans. Well. Now to real business. Still have not sampled any Kansas Barbecue but will see if LC’s or Gates is open. More later after the game when the rest of this write up will either be very happy or very sad – no in-between … went to LC’s Bar-B-Q just now; smoking from the chimney but all locked up; dude just signals they open at 1PM; going back then.

Kansas City barbecue is ummm, ummm good. We smoked the Chiefs like a rack of short ribs. Must admit I nearly choked when Chris Boswell hit the squib kick following the opening field goal. That opening touchdown had the Chiefs right back in it and Arrowhead stadium is LOUD. There was a healthy number of Steeler fans but no more than 10%. Good visible presence with our terrible towels but noise wise you could hear a pin drop when the Chiefs had the ball. The drive home is going to be more enjoyable – plenty of time to figure out how the Steelers will overcome the New England juggernaut.

Steelers defense looked great; but that Chiefs offense is weak. Le’Veon Bell is amazing; good move to ride him as the Chiefs run defense didn’t figure out how to stop him until it was too late. But that red zone offense – Yoi. It seemed like we would march effortlessly down the field and then just stall when the Steelers got inside the 20. That was my impression anyway. Huge turnovers. Alex Smith did not appear comfortable when having to throw on the run. Seemed likes James Harrison, Ryan Shazier, Lawrence Timmons and Bud Dupree were all over the place. Defensive line stuffing the run.

Loved the Vince Williams hit on Tyreek Hill trying to return a kick – heard the Steelers fans screaming appreciation for the smack down. Hill seemed pretty much a non-factor. Travis Kelce had a couple catches but some big drops. The Chiefs used misdirection effectively a few times. These referees seemed to allow a lot of contact between the receivers and defenders but the non-calls were on both sides in my view.

I thought Andy Reid had outfoxed Mike Tomlin when he kicked it long instead of onside. A 3 and out and just enough yardage for a field goal to win it. Justin Gilbert gets caught on the 5-yard line. Some gutsy play calls to get the first downs necessary to reach the victory formation. Not a pretty win; but a win.

My wife sent me a picture of our pooches; Fifi & Kublai wrapped up in a Steelers blanket and not looking happy that the Steelers were kicking field goals instead of scoring touchdowns. Steelers looked like the better team but the Chiefs kept in the game by stopping the Steelers in the red zone. The offensive line looked very good most of the game as Ben Roethlisberger had time to throw and made the creases for Bell to slip through. I really liked one play when Ryan Shazier pulled Bud Dupree out of a melee possibly preventing a flag from being thrown.

The Steelers appear to be looking out for one another. They will have to up in Foxboro. Will take my time driving home so ending this here – with a Here We Go …