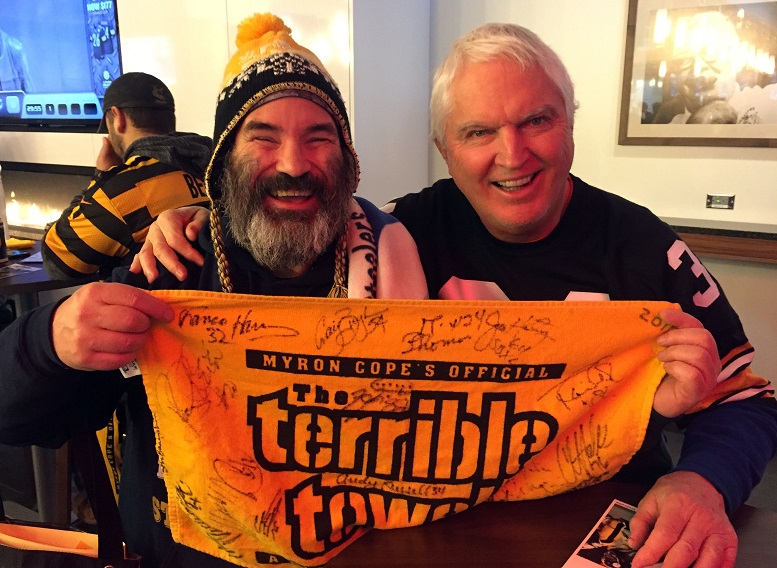 Usually, I like to get to games at least three hours before kickoff. Not really a tailgater; but like to wander outside the Heinz Field environs after disembarking from the Gateway Clipper; maybe drink a beverage or two and stop at Stage AE to listen to some live music. Then wander along Art Rooney Avenue to check out some of the activities before heading inside the stadium.

Once inside, straight to the seats to watch the Pittsburgh Steelers individual warm-up; maybe get a high five from on high as players enter or exit the tunnel. Not this game. It was cold – 4th coldest home game in Steelers history they claim.

For this game, I stayed in the Champions Club until just before the team entered the field for the coin toss and kickoff. Lucky for me, I got to shake hands and chat briefly with Andy Russell! It really did not seem like a playoff game at first. Lots of empty seats. Many NFL teams only count ticket sales when announcing attendance. Pittsburgh does, what I think is, the right thing and announces the turnstile count – who showed up. I heard anecdotally that tickets were selling for $15 on StubHub Sunday morning and that could not even fill up the stadium. Announced attendance was 62, 726 – the 3rd lowest number for a home game this year (not counting preseason). The only home games with less attendance was the last regular season game versus the Browns which had no impact on the Steelers playoff seeding and was used by Coach Mike Tomlin to “bubble wrap” the three B’s and Maurkice Pouncey and give some other players some valuable playing time.

The other game with low attendance?

Ironically, it happened in week 4 against the Steelers upcoming opponent the Kansas City Chiefs.

Yet, the vibe of the crowd was an aura of positivity. The buzz being, we got Ben Roethlisberger, Antonio Brown & Le’Veon Bell playing together in a playoff game for the first time. In Bell’s case his first ever playoff game – would he deliver? What a treat this will be to see. Most people were so heavily clothed that the stadium almost looked filled up. For me, watching a game in person is much different than on television.

The analytical part of my brain is suppressed almost completely by the emotional. No logic; just the rushes of elation and gloom alternating as the game ebbs & flows. So even though Fitzgerald Toussaint only returned the ball to the 15-yard line; I was elated to see the Pittsburgh offense take the field. The first series was a flurry of Ben, Bell & Brown with an Eli Rogers catch in-between. Brown caps it taking a short pass and is heading down the sideline – I can see right down the sideline as he streaks down the field away from me; he is in for the touchdown!

The defense steps up with James Harrison stopping Jay Ajayi for no gain getting a loud burst from the crowd. Artie Burn’s holding penalty gives the Steelers a lot of field to operate on. No worries. Darrius Heyward-Bey catches Ben’s toss for 10 yards and breathing room. Le’Veon Bell then gains 7 more.

A penalty, but hey, we get to play the down over. Bell for 2, then two short passes later, Antonio takes a pass in the middle and is gone for 62 yards and a touchdown. 14-0, this is the early lead we had all been yearning for. A lead that would force the Dolphins to ride with Matt Moore’s arm instead of Ajayi’s legs.

The Dolphins were stubborn running Ajayi three times on the next series for a grand total of 1 yard gained. Matt Moore was 2 for 3 on this series, a 36-yard pass to Kenny Stills causing the most damage but on 3rd and 4; Moore throws an incompletion – not sure which Steeler defended it but the Fish had to settle for a field goal and the strategy seems to be working.

The Le’Veon Bell Show was featured to cap the first quarter and open the second quarter. Ten straight running plays. Toussaint gave Bell a big stage after a 12-yard kick return to the 17. Bell gained 78 of the 83 yards required to score another touchdown. The Miami Dolphin’s defensive tackle Earl Mitchell chipped in 5 yards for encroaching on the line of scrimmage. Bell running the ball will make people jumpy. This was Bell at his stutter step, shift & burst best. Chris Boswell’s clank off the goalpost to miss the extra point caused ne to briefly say that we might need that point later in the game.

Perhaps Adam Gase decided to showcase Jay Ajayi on the very next drive to respond to Bell’s masterpiece. Ajayi did gain 28 yards on 6 carries and another 4 on a reception. This was the same series that Bud Dupree destroyed Matt Moore. Jay Ajayi’s contribution on that play was an unsportsmanlike conduct penalty effectively costing the Dolphins 15 yards on that play – so he really netted 17 yards on his feature drive and the Dolphins settled for another field goal. Ajayi proved to be a poor understudy to Bell.

The rest of the half was punctuated by two turnovers. The first happened with Pittsburgh driving to extend their 20-6 lead when Ben’s pass inexplicably went through Antonio Brown’s hands near the 11-yard line and was intercepted. A 37-yard reception by DeVante Parker had the fish at the 8-yard line with 27 seconds; a first down and a couple time outs. Yoi! As he has so many times before, James Harrison steps up at the critical moment and gets the strip sack that is recovered by Stephon Tuitt. Double Yoi!

Immediately following Ben’s kneel down, I scurried inside to follow the thousands who were already undercover trying to thaw out and missed this huge play unless they saw it on the monitors. The second half had Ajayi opening in an encore performance; perhaps an attempt at redemption. Ajayi’s show lasted 3 plays for 3 yards. L.T. Walton & Javon Hargrave were in on those three tackles. Nice that Ajayi being stopped by linemen with assistance from linebackers or defensive backs. The Dolphins only chance to get back in this game rested with Matt Moore.

Mike Mitchell sacks Moore; LT Walton recovers and Ajayi’s second showcase drive ends with him tagging Walton to make the tackle. Just the position I want an opposing running back to be in – having to tackle Steelers defensive players. Ryan Shazier obliges me by intercepting Matt Moore’s next pass that he returns for 10 yards. Not sure who gets credit for tackling Shazier but would laugh if it was Ajayi again.

Another Bell touchdown. Steelers up 30-6 and this game seems over and the 3rd quarter not even ended. Time for the defense to step up. Stephon Tuitt & Mike Mitchell stop Ajayi for no gain on a 3rd and 4 play. Tuitt again steps up by tackling Matt Moore to turn over the ball on downs.

The 4th quarter starts with Pittsburgh holding the ball at their own 44 but the B’s fail to deliver this time. Le’Veon stopped for a rare 4-yard loss and then Ben’s pass intended for Antonio Brown is defended by Xavien Howard. Steelers defense holds them. Another drive. Bell 2 yards and two straight passes intended for Brown are incomplete. This time the Dolphin’s drive relies almost exclusively on Moore’s arm for a touchdown but the Steelers “bend don’t break” defense prevents the 2-point conversion. 30-12 with 6:02 left to play. Miami needs 3 scores including at least one 2-point conversion to win. Onside kick right to Antonio Brown. We got this. All that is needed is a drive to eat clock and perhaps some icing on the cake with another score. DeAngelo Williams in for Bell, good, we starting to wind down and sit key players. DWill makes to straight runs for just a few but the clock is ticking. Just need a first down but on 3rd and 8 Ben throws an interception as he is being pressured. Pittsburgh’s defense steps up and while giving up some short passes; nothing opens long.

By the two-minute warning it is apparent the Dolphins have quit; two unused timeouts. Lawrence Timmons makes two consecutive sacks and the Dolphins call timeout with 26 seconds to play. I can only imagine that Gase is telling the team; time to swim back to Miami. Damien Williams runs the ball on 4th and 31 and it’s all over except Ben’s kneel down.

Sequel: Blissfully unaware we leave the stadium; Mike Tomlin’s press conference says no significant injuries and various renditions of the Leiber and Stoller song “Kansas City” (Here we Come) going through my mind. Then the two big news stories. Ben in a boot; and Joey Porter may get the boot following his arrest in the Southside. Many opinions on both situations. Joey on leave and Ben out of the boot. Time to get ready for Kansas City.

It’s early Tuesday afternoon here in Maryland and need to decide tonight: Last night my wife told me she went on line and that tickets for the Steelers-Chiefs game could be had for about $100 in the cheap seats. Hotel will set me back about $100 per night within 3 miles of Arrowhead Stadium. Flying not an option since cheapest airfare around $800 but if I left Friday morning driving could be in Kansas City by Saturday night. Should be a two-thousand-mile round trip driving.

What do you think?