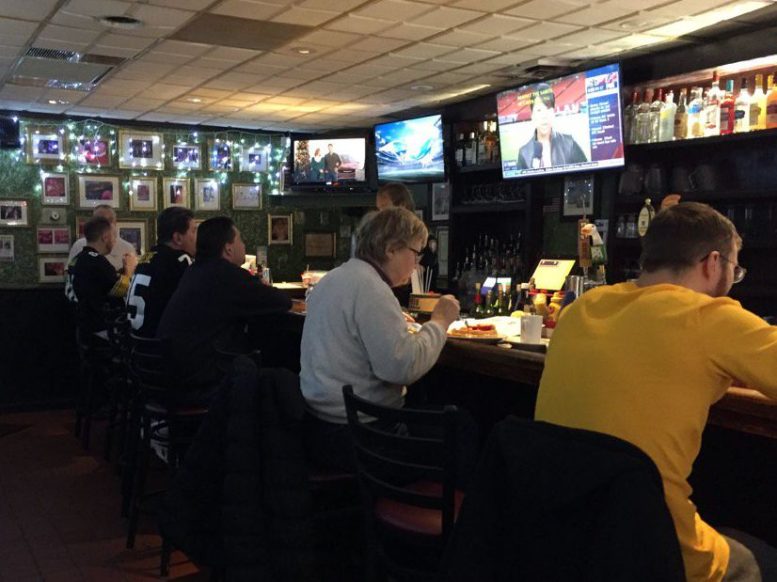 2016: Why even watch this game? Win, lose or draw the Pittsburgh Steelers are guaranteed to host a wild card team at home. They are playing the hapless Cleveland Browns that could lose the first overall pick of the 2017 draft if they win. Typical Cleveland – they lose if they win. I guess the moniker “mistake on the lake” has been well earned. Mike Tomlin has said the killer B’s along with Maurkice Pouncey will sit the game out. There are other starters on both sides of the ball that will likely be on a snap or drive count. But I’m the prototypical average Steelers fan so of course I’m going to watch the game. As one of the shirts in my wardrobe says, “It’s not just football … it’s Steeler football!”

Not going to the game today, someone bought my tickets on Ticket Master. More than likely another anonymous average Steeler fan or even possibly a Browns fan. Yes, Steelers Nation; fans of the Cleveland Browns football team exist. In fact, the Browns Backers Worldwide (BBW) claims to be one of the largest organized fan clubs in all professional sports with members all over the world. I can attest to meeting several Browns Backers when I was playing in the sands of Iraq. These are quite stoic individuals who in years past went into seasons considering how many quarterbacks would start or what coaches might be available if the ownership pulled the trigger. There are all types of odd fetishes in this world.

Most football purists would opt to watch New England Patriots, Tom Brady, possibly the best all-time quarterback, or, the Carolina Panthers Cam Newton that can still instill some excitement instead of Landry Jones. But hey, I’m not an NFL fan; I’m a Steelers fan. No contest, it’s to the local Steelers bar to watch the B-less Steelers play the Browns. What am I looking to see? Well first, it’s not Landry Jones. We already know what he can do and the better he plays the more likely he finds someone to pay him money that the Rooney’s won’t match. I will be looking to see some skill players who will likely be in back-up roles in the next few weeks: Does DeAngelo Williams run with confidence. Will Sammie Coates stretch the field and catch a long one. Does Demarcus Ayers get more looks; is he as energetic as last week with his blocking. Does Jesse James continue to make some clutch catches how is his blocking. Then we go to the offensive line. How does the line function with B.J. Finney in at center? Can they effectively block and open holes when making changes in the line-up with Chris Hubbard and even Brian Mihalik getting snaps to spell some of the starters?

On the defensive side of the ball; can the front line limit the Browns rushing attack – probably their strongest point. Will L.T. Walton continue and Johnny Maxey get more chances to shine? Does big Dan McCullers get angry and go into beast mode to surprise everyone. I’d like Jarvis Jones one last opportunity to get a sack the season. Will be tickled if Vince Williams gets to wreak havoc. How about a bevy of snaps for Anthony Chickillo and Tyler Matekevich? In the secondary, the man I want to see get at least a dozen snaps is Justin Gilbert. Yes, he is the number four cornerback, but let’s get him hungry for more snaps in case he is needed later. Of course, it will be nice to see the continued development of the three fabulous rookies; Sean Davis, Artie Burns & Javon Hargrave.

Special teams again my inclination is to see Justin Gilbert and Demarcus Ayers back to return kicks and punts respectively. Want to see good coverage and for both Chris Boswell and Jordan Berry kick/punt consistently. Finally, there are the Browns. Yes, they have been the laughingstock, but Hue Jackson is here to stay for a few more years at least. They are trying to emulate the late, great emperor Noll by ridding themselves of useless players and even talented ones that may not fit their vision. Build the team through the draft; 14 picks in 2016 and another 13 or 14 in 2017 including two top-10 picks. This may be a team to be reckoned with in 2-3, no more than 4 years if they find themselves a quarterback. Book it. That’s what I’ll be looking for. How about you?

It’s now 2017: The Outta the Way Café recovered from their New Year’s Eve bash and opened this morning. An hour and a half before a meaningless game -at least playoff-wise and there are a dozen Steeler fans here in Maryland. More coming in. Why? They are Steelers fans. I grabbed my usual table tucked in a corner and prepared my position including checking in with the Steelers Depot ‘Week 17 Steelers Vs Browns Live Update and Discussion Thread.’

Prior to kickoff and the early stages of the game; the thread and the café crowd seemed almost disinterested in the game. One regular on the thread said, “This is kind of weird watching them play with no real concern if they lose. It feels like a preseason game.” With another responding, “Landry Jones always makes it feel like preseason.”

“I feel that the only comment that I need to make today after each play is ‘I am glad no one got hurt’. I really do not care if the Browns do well or poor.” This comment seemed to catch the detachment early in the game. There was even some discussion about the 2017 draft. Complaints about overall poor tackling was explained by the Steelers playing a Pro Bowl game type defense – no hard shots.

Cleveland going up 14-0 combined with an impotent offense seemed to goad us back to some normalcy. Someone opined whether we would have another 51-0 loss to the Browns as happened in 1989. “I’ve seen enough of (Landry) Jones the past 4 years.” Calls for Zach Mettenberger. Incredulity that the starting defense apart from James Harrison & Stephon Tuitt was out there and Cleveland was advancing down the field with ease. Then Ricardo Mathews aggravated his ankle injury: “Why is Matthews playing on a bum ankle in the first place?” Questions about coaching decisions. Booing at the Steelers performance can be heard from the Heinz Field crowd. Ahhh, back to normal.

Jordan Berry with five punts and the first half not over. A comment that Ryan Shazier should not be playing – just as he intercepts the ball. Then a big fumble recovery by Sean Davis was converted into a touchdown pass to DeAngelo Williams. Quickly the comments shift from release Landry; he’s gone to, “Ben starting to sweat as Landry Jones pours it on!” Johnny Maxey was making people happy with his motor even with the unnecessary roughness flag. Demarcus Ayers & Eli Rogers also seemed here to play.

I’m not sure if the score to finish the first half or if something was said in the locker room but the Steelers seemed to play with more resolve in the second half. Although there was no scoring the 3rd quarter; one of the biggest plays of the game occurred when Landry Jones threw a deep pass on 3rd and 11 that was intercepted and returned 67 yards for what should have been a Browns touchdown. But the Browns will be Browns and Darrius Heyward-Bey reached in to slap an unsecured ball into the end zone which Landry Jones alertly fell on to get a touchback. The 4th quarter started with DeAngelo Williams finishing a dive with a tough run to tie up the game and a 14-point swing in the game.

Well before that score, the fans at the Café were looking up from their food and drink and focused on the screens as were the comments that picked up the pace – 781 comments in the 2nd half compared to 487 in the 1st.  First the Steelers had to make it interesting. After the defense held on a Cleveland drive that included a sack by Dan McCullers, the Browns field goal attempt went wide. The Steelers respond with a 45-yard pass from Landry Jones to Darrius Heyward-Bey and then a touchdown pass to Ayers. Right as rain, the Steelers lead the browns 21-14. With 5:14 left in the game, the defense just needs to hold. Chris Boswell’s kick goes four yards deep into the end zone but Mario Alford returns it 36 yards before being tackled by Fitzgerald Toussaint. Then Jarvis Jones records his first sack of the season; the short euphoria burst by Isaiah Crowell’s 67-yard run and just like that the Browns are back in it 21-21.

The Steelers ineptly muff a kickoff; punt and then Artie Burns gets toasted by Tyrelle Pryor for 43 yards. Jarvis Jones comes up with another big play by forcing a Crowell fumble at the 3-yard line. Mike Mitchell proved his worth on both plays. Saving the touchdown by tackling Prior and recovering the Crowell fumble.

In overtime, the Browns drove right down the field to have first and goal at the 9. McCullers makes the stop for no gain. Then the controversial facemask called on Mike Mitchell makes it first and goal at the 2. A touchdown and the game is done. Some crazy play by the Browns has Ryan Shazier tackling Andre Hawkins for a 14-yard loss. Maybe Hue Jackson really preferred the top pick in 2017 over winning this game and Cleveland settles for a field goal. In perhaps his best series of the day, Landry Jones leads the Steelers down the field, finishing it with a pretty pass to Cobi Hamilton. As a commenter stated, “Best pass I’ve ever seen Landry throw in his time in Pittsburgh. Ironic because it’s probably his last.”

This game started with nonchalance; but we learned that there were several players that were prepared to do what it takes to win. It wasn’t a meaningless game to them. DeAngelo Williams ran strong despite lackluster blocking and his knee looked stable. Darrius Heyward-Bey demonstrated why no player should ever quit on a play; he must have covered over 100 yards just to force that fumble. Landry Jones was up and down but kept his composure in the end. Young receivers Demarcus Ayers, Eli Rogers and Cobi Hamilton all came up with good catches. Jarvis Jones made a couple big plays. Ryan Shazier made his presence count with the interception and Mike Mitchell made some key plays despite the facemask penalty.  Dan McCullers pushed the pile and how about that Sean Davis? Who did I miss?

Onto the playoffs; the top players should all be back, but we will learn more about injury status this week.