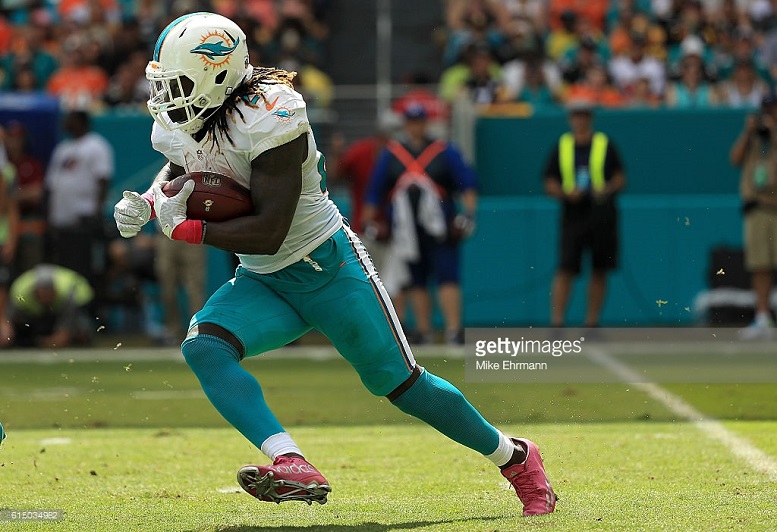 Omar Kelly has covered the Miami Dolphins for the South Florida Sun-Sentinel for quite some time and when it comes to his work on Twitter, he’s easily the team’s most controversial beat writer. On Tuesday, Kelly created quite a firestorm on Twitter with the tweet below.

Why do Steelers fans think Le'Veon Bell is such a God? Jay Ajayi had more rushing yards and more rushing touchdowns on less carries. FACTS

Statistically speaking, Kelly’s tweet is on point as Miami Dolphins running back Jay Ajayi slightly bested Pittsburgh Steelers running back Le’Veon Bell in rushing yards and total touchdowns during the 2016 regular season and did so with one less carry.

Now, when called on it, Kelly made sure to point out that he wasn’t comparing the two running backs when it comes to pass receiving and that’s a good thing because the Dolphins running back only caught 27 passes for 151 yards in 2016 while Bell amassed 75 receptions for 616 yards and two touchdowns during the recently concluded season.

Now, being as Ajayi and Bell finished the 2016 regular season with very similar rushing stats, it makes it easy to compare the two in other statistical areas related to only carrying the football.

So, what about carries of 10 yards or more? Well, Ajayi once again topped Bell in that statistical category by just a little bit as he had 39 such runs compered to Bell’s 37. Additionally, Ajayi’s average on runs of 10 yards or more was much higher than Bell’s and that’s obliviously a result of him having 6 more runs of 20 yards or more than the Steelers’ running back had.

Now, yards per carry averages when it comes to running backs certainly isn’t the end all, do all and I have a few stats related to that notion to show you how Bell’s 2016 rushing numbers were quite better than Ajayi’s were.

Now let’s look at which of the two running backs had a higher “successful play” percentage when carrying the football. In case that term is new to you, a successful play in football is usually regarded as one that gains a certain percentage of yards on a particular down and distance. Specifically, a successful play on first down is one that gains 45% or more of the yards needed for a new set of downs, or a touchdown. In other words, a first down and 10 play needs to gain 4.5 yards for it to be deemed successful. As for second down plays, 60% of the needed yardage must be produced in order for it to be deemed successful one and on third and fourth downs, 100% of the needed yardage must be achieved for the play to be considered a successful. With that statistical explanation now out of the way, we can take a look at the rushing play success rates of both Ajayi and Bell

According to my play-by-play research on Pro Football Reference, 46.2% of Bell’s carries during the regular season qualified as successful ones while only 37.8% of Ajayi’s runs were successful. That’s an 8.4% difference in Bell’s favor.

In summation, you have to really look at Ajayi as a boom or bust running back right now based on his 2016 season. Sure, he’ll provide you with some long runs, but as a whole, isn’t a very consistent running back on a down-to-down basis. Bell, on the other hand, might not deliver a high amount of explosive plays, but he does deliver a lot more consistency on a play-to-play basis. That’s why Steelers fans think Bell is “such a God” and a much better ball carrier than Ajayi.

When you do add in Bell’s receiving abilities along with how well he pass protects, it’s easily clear that the Steelers running back is better than Ajayi and it’s not even close.