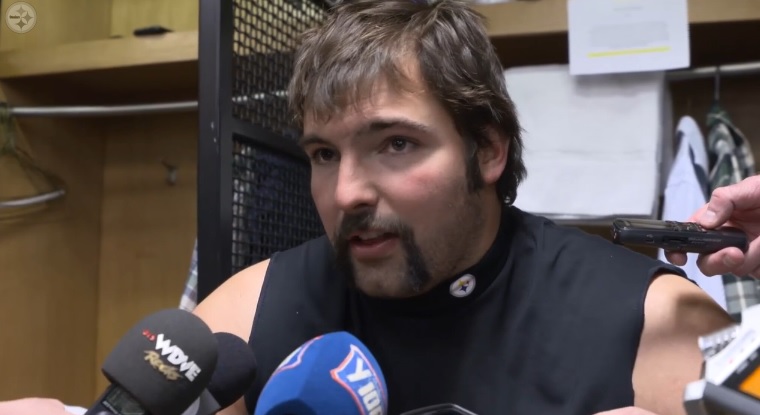 Le’Veon Bell had a record setting day. But it was far from a one-man band. It’s a total team effort, starting up front with the offensive line. The only people happier than Bell has to be that starting five. At least, that’s how they came off talking to reporters following the win.

“Just keep running your feet and L-Bell will make it happen,” Maurkice Pouncey said after the game, via Steelers.com. “You guys see how good he is.”

How good it was. 167 yards, a franchise record, and two scores, the first Steelers’ playoff back to do since Rashard Mendenhall in 2011. It was, statistically at least, the greatest rushing performance in the franchise’s playoff history.

It’s in part due to the uncanny vision Bell has, able to wait and wait…and wait, before exploding upfield and making a big play. Pouncey said he often doesn’t even know where Bell is at on the field. Could be behind him. Could be in the end zone.

“We honestly don’t know. We’re watching film and are like, oh man, that was crazy, he was right behind us. But it’s a blessing when you have that type of vision and that type of runner. And we’re going to use him.”

Bell said he knew he broke Harris’ record after the stadium announced it following the third quarter. But the line, according to Alejandro Villanueva had no idea, though it didn’t make them any less happy to hear it.

“I’m really happy for Le’Veon,” Villanueva said. “He’s a great worker. He works extremely hard. He’s an exceptional football player and he deserves all the accolades on the field.”

And the leader of the group, Ramon Foster, said in January football, running the ball is a must.

“And the way he’s been playing as of late, you gotta keep giving it to him,” Foster said. “Coach Haley set the mindset, our mindset to it, Coach Munch got us right. It’s postseason ball. You gotta be able to run the ball like that.”

For all the praise his line gave Bell, Bell dished it back speaking to reporters in his press conference.

Pittsburgh will travel to Kansas City to take on a better run defense but not a great one. For the season, the Chiefs have allowed 4.4 yards per carry, tied for 20th in the NFL. That’s included yielding five yards per carry in two of their last three games.

Bell rushed for 144 yards on a whopping eight yards per carry in the first matchup of the season, his first game back in 2016.