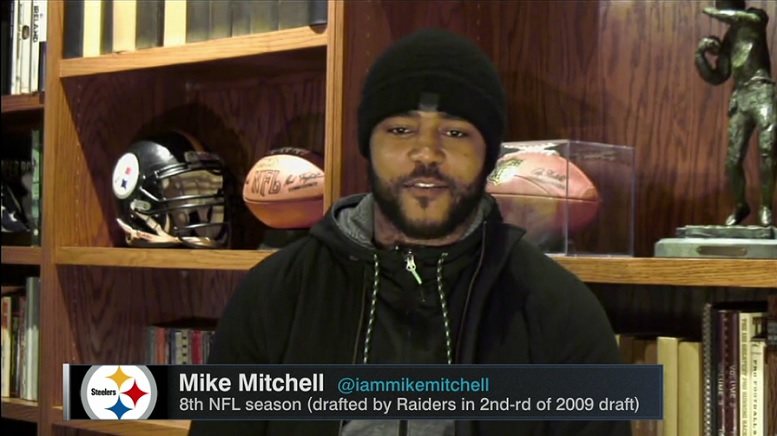 Not even 24 hours after the Pittsburgh Steelers beat the Kansas City Chiefs on Sunday to advance to the AFC Championship game, most of the talk Monday afternoon is centered around a post-game locker room video rather than what actually took place on the field at Arrowhead Stadium.

During a Monday interview on ESPN’s NFL Live, Steelers safety Mike Mitchell was asked about the video that wide receiver Antonio Brown posted on Facebook after Sunday’s game that included head coach Mike Tomlin addressing his team after they beat the Chiefs. As you would expect, Mitchell was asked if Tomlin addressed Brown’s video on the plane ride home.

“Not yet,” Mitchell said. “I’m sure we will. Coach Tomlin is the boss and I’m sure he’ll say something to A.B. about it. I’m sure he’ll address us as a team per our usual anytime an issue comes up. But for us, it’s not really going to be a distraction. We’re going to go on, business as usual. We’ve got a great opponent coming up and Coach T is going to direct us in the right direction. That’s where our focus needs to be, that’s where it will be. It’s the AFC Championship, we’re not going to be distracted by anything like that.”

The irony of Brown’s video is that it included Tomlin telling his team to be careful on social media this coming week. Sure, Tomlin used some colorful words when talking about the Steelers upcoming opponent, the New England Patriots, but that’s not the biggest issue here. Instead, it’s the fact that Brown violated the code of the locker room by live streaming Tomlin’s post-game address to his team.

Mitchell was asked Monday to discuss the sanctity of the locker room as it relates to what’s said in there should stay in there.

“I think it’s kind of different for each player, but for the most part, I think it is a pretty sacred place,” said Mitchell. “They give us our allotted time right after the game where there is no media and it’s kind of our opportunity to kind of bond and just reflect what we just went through together as men.”

Mitchell went on to describe how people outside the locker room really don’t have a firm grasp on what really goes on inside it even though they think they do.

“I get as chuckle out of it because my family gets so excited about these games and this run that were on, and everything, because they feel so tied to it. But in reality, they’re so far removed from it, Mitchell said. “What really happens this time of year is that 53 men and coaches get together and become a family and that started back in March. And right now, you’re seeing the fruits of all that hard work, all that labor, all coming to a fruition right here. Were all hunting the same world championship goal.

“So, that time after the game, for me, I guess I am kind of describing how I feel, can be a very sacred moment. I really want to hear what my coach is saying. I just kind of want to spend that time with my brothers. So, that’s kind of how I view that time.”

Tomlin will meet the media again on Tuesday to discuss the upcoming game against the Patriots and you can bet he’ll be asked about the video as well. As for Brown, I’m sure that’s the last time he post any post-game team addresses by Tomlin.

According to Adam Schefter of ESPN, Brown could be fined for violating the league’s social media policy for his post-game live stream as NFL policy prohibits players from posting messages on any social media platform 90 minutes before kickoff through post-game interviews.