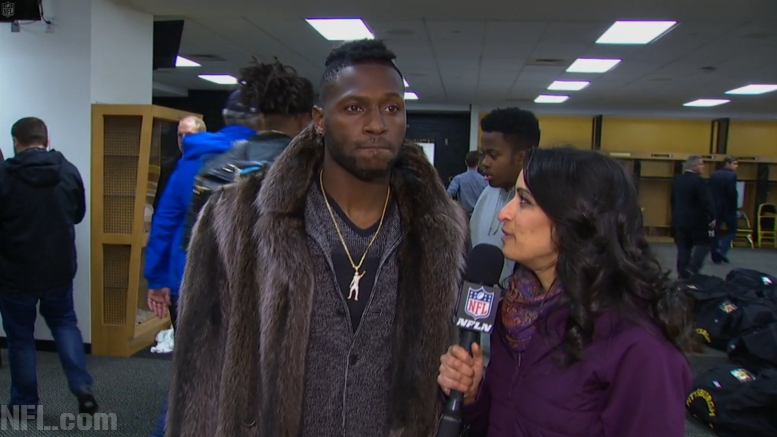 Earlier today we brought you WeightGate, some ridiculous theory from some loudmouth with a radio show who calls himself “The Brick”, who suggested that Pittsburgh Steelers quarterback Ben Roethlisberger is playing 15 pounds overweight and that is why the team could not, and did not, execute a quarterback sneak at the goal line on Sunday.

Now, I don’t even know what to call this stupid one, but now we have Mike Florio floating out the ridiculous notion that the Steelers are fanning the flames of public ire over Antonio Brown in order to whip up smoke into the trade winds, hoping to entice suitors and field a couple of phone calls about dealing the perennial first-team All-Pro wide receiver.

Writes the professional conspiracy theorist, after referencing Mike Tomlin’s remarks that he doesn’t want to see Brown’s future as bouncing from team to team because of the way that he carries himself off the field: “Maybe Tomlin does”.

He cites a “leak” from Aditi Kinkhabwala, who said on NFL Network that Brown was supposedly “pouting” about the fact that teammate DeAngelo Williams scored a touchdown on third and one from the five-yard line in the first half of Sunday’s game against the Patriots.

Writing that “the team believes Brown cares too much about his statistics” (side note, good luck finding a top wide receiver who doesn’t care about his statistics), Florio continues to say that this ‘leak’ “could be regarded as a deliberate effort by the team to slide Brown toward the trading block”.

Historically, the Steelers have worked out new deals with their top talent in the offseason of the start of the final year of their deal. That is where Brown is now, so the team is expected to reach a new long-term extension with him at some point between now and the start of the 2017 regular season.

“Before the Steelers consider that, why not see whether another team makes a call”, Florio mindlessly ponders, ignoring the fact that the team has already taken the unprecedented step of forwarding a total of four million over the course of the past two seasons in order to appease their top talent while he waits in line like everybody else for his pay day.

Referencing the completely incomparable situation during which the team alleviated themselves of the mess that was Santonio Holmes, whose productivity never matched his salary demands and who was facing a four-game suspension, Florio suggests that the dreaded “Facebook Live incident” together with the supposed ‘leaks’ “could be enough to prompt the team to give the tree a mild shake and see what happens”.

Florio knows that what he is writing is nonsense, because he parses it well enough to deflect any criticism when nothing comes of it, throwing in enough qualifiers to point out that he was just speculating. The Steelers are in a championship window with a quarterback thinking about retiring. They’re not going to trade their only stable skill player on offense.