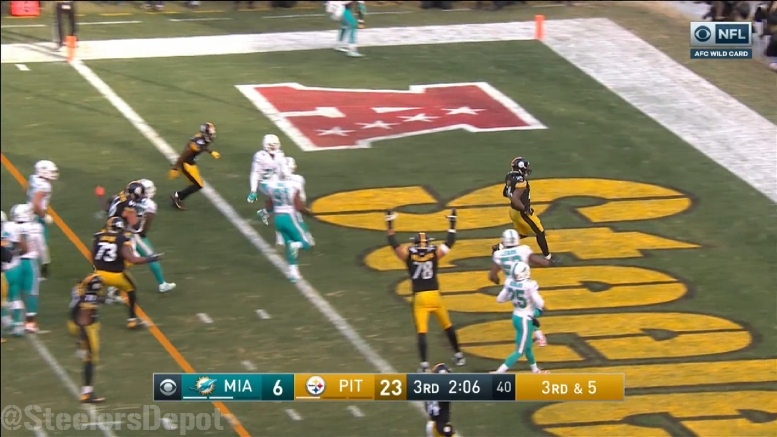 Bell finished with 29 carries on the day, going for 167 rushing yards, and scoring twice on the ground. That total surpassed Franco Harris’ best mark in January 1975. Harris rushed for 158 yards on 34 carries in that game.

Ben Roethlisberger only threw the ball 18 times during the game, to provide some perspective regarding how much the Steelers relied on their All-Pro running back in this game against the Dolphins. They rode Bell’s performance to a 30-12 score at the end of the game, to which he contributed two of their four touchdowns.

The running back helped set the tone right away with an 11-yard run on the first play of the game—even ignoring the fact that his second carry went for a two-yard loss. He added 12 yards on three carries on the Steelers’ second drive, both of which ended in long touchdown passes to Antonio Brown.

The third drive? That was all Bell. Starting from the 17, he carried the ball on 10 consecutive plays for 78 yards—factoring in a five-yard encroachment penalty by the defense—which he capped off with a one-yard touchdown after setting up first and goal from the one on a 25-yard run.

He finished with 99 rushing yards in the first half, but he wasn’t done. He ripped off runs of 15, 8, and then 26 yards in a row to begin the Steelers’ second-half surge, though a late sack forced the offense to settle for a field goal on the end of that drive.

The defense got the ball right back following an interception, setting up Bell and the rest of the offense on the 25-yard line, a short drive that the running back capped off with an eight-yard touchdown run on third and five.

After that, the Dolphins’ defense began playing him better and limiting his success on the ground, but, of course, at that point, they knew what the Steelers would be doing as they were looking to close out the game after establishing a substantial lead.

In fact, before the game was over, the Steelers sat Bell and put DeAngelo Williams into the contest. I don’t believe that the veteran back saw even a single snap against the Dolphins until the coaching staff pulled Bell to preserve him after his record day.

After the early strikes, the offense really started to take the air out of the ball, which should be obvious based on the total number of passes thrown. The Steelers have done a stellar job establishing the run over the course of the past eight games, and that bodes well for the remainder of the playoffs.