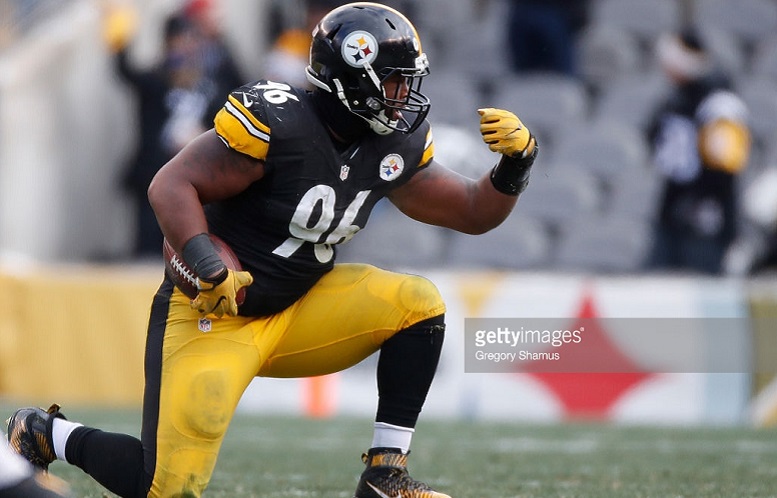 When the Pittsburgh Steelers lost defensive end Cameron Heyward earlier in the season to a torn pectoral muscle the defense needed several other players to step up and take his place. One of those players was second-year defensive end L.T. Walton, who the Steelers drafted in the sixth-round of the 2015 NFL Draft out of Central Michigan.

Walton, however, has made several improvements this season and especially when it comes to defending against the run even though the overall team stats will tell you otherwise. When Walton was on the field against the run during the regular season opposing offenses averaged 5.45 yards a carry as opposed to 4.35 yards per carry when he’s been off the field.

With full disclosure of those stats now out of the way, Walton has showed up numerous times on tape in a positive manner when it comes to his ability to contain gaps and especially against outside zone runs. Walton can also usually be seen running after the football which is another thing that’s constantly drilled into young Steelers defensive linemen.

“He’s come in and done a good job for us,” Steelers defensive coordinator Keith Butler said of Walton during his Thursday session with the media. “John [Mitchell] always does a good job in getting those guys ready to play.”

During the regular season, Walton registered 8 total tackles with two resulting in lost yardage in addition to a quarterback hit and a pass defensed. He played 254 snaps on defense during the regular season and 29 more in the Steelers Sunday Wild Card win over the Miami Dolphins in a game that featured him picking up two more tackles of which one resulted in lost yardage. He also recovered a fumble in that game.

Despite all the improvements that Walton has made this season, Butler would like to see the young defensive lineman make strides in one particular area of his game.

“What I would like to see better from him, though, is a little bit better of a pass rush and not be down the middle of so many people,” Butler said Thursday of Walton. “He’s doing a good job in the running game, he needs to do a little bit better in the passing game.”

Sunday at Arrowhead Stadium the Steelers will face the Chiefs again and their veteran quarterback Alex Smith. The Chiefs run the West Coast offense and that usually results in Smith getting the football out of his hands quickly. While the Steelers defense did sack Smith a total of four times when they faced him back in Week 4 of the regular season, the since-injured Heyward recorded three of them.

Smith has only been sacked a total of 15 teams since the Chiefs played the Steelers with nine of them coming in two separate games. In short, the Steelers defense will likely have their hands full this Sunday in Kansas City when it comes to being able to get after Smith. The key to getting to him will be to stop the Chiefs on early downs to force third and long situations. If that happens, perhaps Walton can register his first career sack or two, or at the very least, do his job well enough that it results in one of his teammates getting to Smith. With fellow defensive end Ricardo Mathews expected to sit out Sunday’s playoff game against the Chiefs, Walton figures to see a lot of playing time once again.