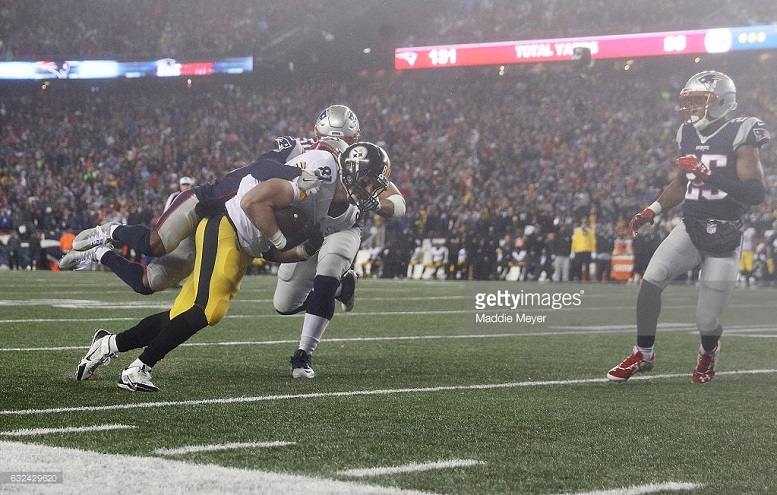 When the Pittsburgh Steelers signed Ladarius Green this past offseason to a highly lucrative deal, many figured that was the end of the road for talk of Jesse James being the starting tight end. Though, injuries and lingering concussion issues surrounding Green forced the Steelers to flip the script and James became a much bigger part of the offense than anyone imagined. James’ uprising in the Steelers offense could not have been more visible than throughout the 2016 post season.

While James had a slow start on the receiving end against the Miami Dolphins with just one reception for six yards, his key blocks played a pivotal part in Antonio Brown’s opening touchdown and Le’Veon Bell’s 167-yard rushing performance. This game would serve to show just the leaps and bounds James has made from rookie to sophomore season. James’ blocking capabilities were a hot topic around Pittsburgh this time last season but now one year later, majority of those questions have been forgotten.

Seeing that James is surely not on the level of Miller in terms of play yet, his strong showing in the 2016 post season was still quite the way to cap off an impressive sophomore season. James scored three touchdowns, tied for second most of all Steelers’ receiving targets with Eli Rogers. James also was a favorite for quarterback Ben Roethlisberger, as his 60 targets were fourth most on the team.

As the Steelers head into the offseason, they may be faced with some concern over Green’s longevity and injury history at the tight end position. Unlike the previous offseason though, the Steelers will not be faced with the concern of what lays behind Green on the depth chart, as laying behind him is a more than capable James.