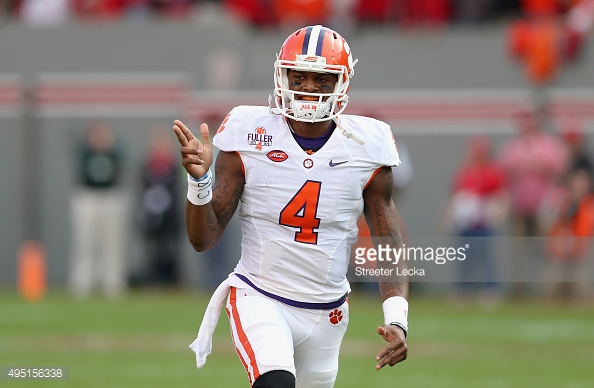 Stop me if you’ve heard this one before: the Cleveland Browns are in the market for a quarterback.

Well, of course, we know that they are technically always in the market for a quarterback, as in a franchise quarterback, considering that they have yet to have even one of them since they returned to the NFL in 1999. They are perpetually in the market until they find one.

That hasn’t stopped them from drafting them in the first round or signing them in free agency. I can’t even keep track of how many quarterback they have had over the course of the past 17 years or so any more. They had three different quarterbacks start games just last year, and six total different ones throw a pass.

The next quarterback throwing a pass for Cleveland might be Clemson quarterback Deshaun Watson, whom, according to reports, the Browns were trying to persuade to get him to participate in this week’s Senior Bowl activities, where, as you no doubt know, our own Alex Kozora is spending his time.

According to Peter King, while the Browns “did not urge him to play”, according to a team source, they did talk to the incoming rookie quarterback, which, to me, and apparently to King as well, basically sounds like they wanted him to play and to get a good look at him, but he declined the opportunity.

This is relevant for a pretty key reason. The Browns’ coaching staff, led by head coach Hue Jackson, is down in Mobile right now working with the Senior Bowl participants and will be coaching the South team this year. That means that this would have been a golden opportunity for both the player and the coaching staff to get a ton of one-on-one experience with one another.

King points out that several other notable recent quarterbacks who declined their Senior Bowl invitations slid down in the draft further than they expected to go, “fairly or unfairly”, and many do see Watson as legitimately in play for the first-overall pick, at least for the moment. Apparently the Browns are entertaining that thought as well, as they hold that top spot—as well as the eighth, if my memory is correct.

King emphasized that if the Browns end up falling in love with Watson, it is really not going to make a difference whether or not he participated in the Senior Bowl, but it could play a role if their decision is close between multiple quarterbacks, which is certainly not outside of the realm of possibility.

The majority opinion, however, is that this is not a very impressive group of quarterbacks coming out for the draft this year, an evaluation that I would tend to agree with. If I were in the market for a new franchise quarterback, I probably wouldn’t be putting all my eggs in this year’s basket. But the Browns, and more specifically Hue Jackson, may not have a choice.