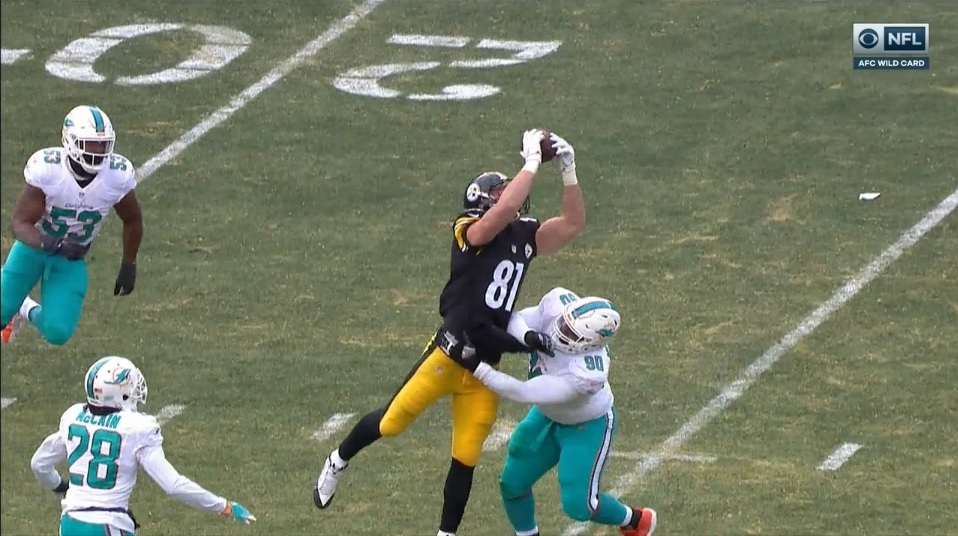 The Steelers played the Miami Dolphins in the AFC Wild Card Round looking to avenge a week 6 loss. The offense came out on fire and the Steelers had a well-rounded performance resulting in a 30-12 victory. With a dominant 18-point victory the Steelers looked like one of the best teams all around teams in the playoffs. They now advance to the AFC Divisional Round to play the Kansas City Chiefs in Kansas City.

Obviously the first place to start is Antonio Brown. He had three receptions and two touchdowns for 119 yards on his first three receptions which gave the Steelers a quick 14-0 lead. His early scores came from 62 and 50 yards away and set the tone for the rest of the game. While he did have a few drops, his final stat line was five receptions for 124 yards, and two touchdowns on nine targets. A great game from one of the best receivers in the NFL.

The MVP of this game was undoubtedly Le’Veon Bell. His stat line was 29 carries for 167 yards and two touchdowns. Prior to kickoff people were debating whether he or Jay Ajayi would have the better performance, but Bell quickly asserted himself as the best running back on the field today.

In my “In the Trenches” breakdown of the Steelers running game I was curious how the Steelers were going to pull David DeCastro with Ndamukong Suh wreaking havoc at the line. Luckily, Todd Haley had the answer by pulling right tackle Marcus Gilbert instead. A perfect example came on Bell’s 26-yard rush that was ruled a touchdown but eventually overturned. Bell’s value goes beyond stats.

The Dolphins essentially had three straight drives, one from a Ben Roethlisberger interception, one right before halftime, and a third to start the second half. In that time the Steelers offense only got to run nine plays, any defense would show signs of fatigue. So, when the Steelers got the ball back they had an eight-play drive that chewed up four minutes of game clock centered around Bell. It gave the defense time to rest, and resulted in a field goal. Bell had rushes of 15 and 26 yards on the drive helped the offense get in gear for the second half.

The defense showed up today in a big way. A great sign moving forward in the playoffs.

They shut down Ajayi to the tune of 33 yards on 16 carries and their tackling was sound. Defensive Coordinator Keith Butler kept the pressure on Dolphins Quarterback Matt Moore, and the defense ended up with five sacks. All four starting linebackers had either a sack or an interception with Lawrence Timmons leading the team in tackles (14), and sacks (2).

Not only was the defense able to create turnovers, they did so in crunch time. The first turnover was a fumble caused by a James Harrison sack when the Dolphins were threatening at the Steelers eight-yard line. It prevented the Dolphins from cutting the lead to a single score right before half time. The second turnover, a second strip sack, caused by Mike Mitchell put the brakes on a seven play Dolphins drive after halftime. Then Ryan Shazier’s interception led to the Steelers’ final touchdown, a Bell rush, and the proverbial nail in the coffin.

The defense looked like a playoff defense, a trend that’s going to need to continue if the Steelers are going to win in Kansas City.

Ben Roethlisberger went 13 for 18 but threw two interceptions along with his two first quarter touchdowns. He was injured late in the fourth quarter, with the game out of reach and wore a walking boot at his post-game press conference.

While Roethlisberger assured the media that he was going to play next week, I expect Mike Tomlin to take some heat if it turns out that his star quarterback sustained an injury in a game that was essentially out of reach. DeAngelo Williams came in for Bell, but Roethlisberger remained in the game; a game management call that the media will pounce on if it’s an injury of any significance. All in all, this was a well-rounded win from beginning to end. On to Kansas City!