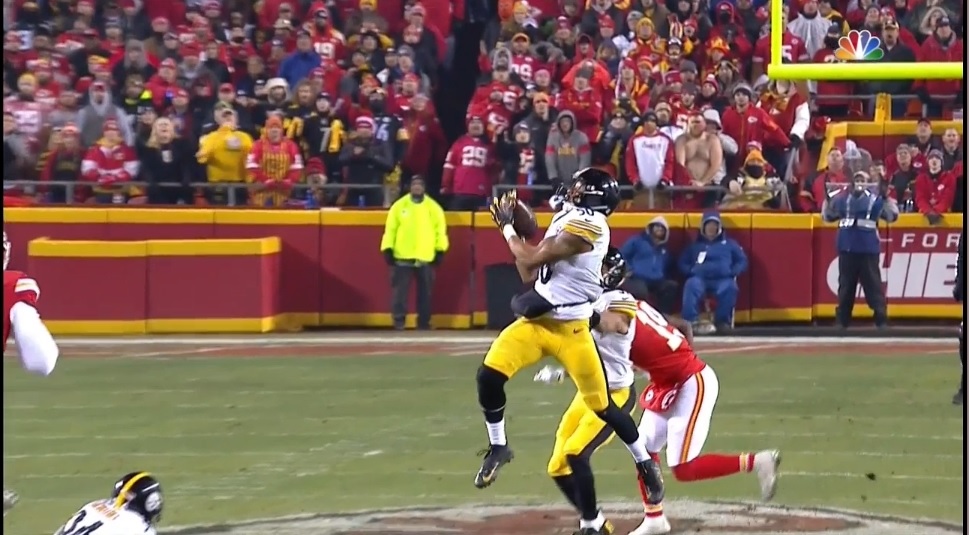 The Steelers punched their ticket to the AFC Championship game against the New England Patriots by beating the Kansas City Chiefs at Arrowhead Stadium 18-16 in another close one. Here are my gut reactions:

Le’Veon Bell and the offensive line continued to dominate as I predicted per my “In The Trenches” breakdown of the Steelers’ running game earlier this week. Bell racked up a 101 rushing yards by the end of the second quarter. The Chiefs coaching staff made some adjustments to their defensive scheme at halftime that slowed Bell down in the second half, but he still finished with 170 rushing yards, and although the Chiefs managed to keep him out of the end zone, Bell’s fingerprints were all over this game.

Chris Boswell had a record setting game with his six field goals, and if it weren’t for his consistency the Steelers wouldn’t be playing in the AFC Championship game. But kicking six field goals is generally not the sign of an effective red zone offense.

I’m not going to point any fingers until I see the game tape but I disagreed with a lot of Todd Haley’s play calls. It seemed like the plays he was dialing up were intentionally short of the first down marker/end zone and he was hoping that the receiver would be able to get the appropriate yardage after the catch (think Antonio Brown on the game winning play against Baltimore).

Ben Roethlisberger finished 20/31 for 224, an interception, and was sacked once. His total QBR was 27.7, he didn’t seem completely out of sync with his receivers, but at the same time he lacked the laser preciseness needed to win a 7th Super Bowl, hopefully that isn’t an issue next week when he squares off with Tom Brady for the first time this year.

Antonio Brown had a quiet second half but was there when the offense needed him. It seems like he never loses concentration whether he has six catches or 15. His seven-yard reception on 3rd and three iced the game and officially punched the Steelers’ ticket to Foxboro. It seemed like he wasn’t always on the same page with Ben Roethlisberger (especially in the first half) but I don’t know if there’s a more clutch receiver than Brown. He finished tonight’s game with six receptions for 108 yards on 11 targets.

Another big contributor in the passing game was Jesse James. I was surprised he didn’t get more looks in the end zone. He filled in admirably as a receiving tight end in Ladarius Green’s absence with five receptions and 83 yards on six targets.

If I have one criticism, it’s that James always seems to be jumping or on his knees when making a catch. It’s a rare occurrence when he’s making a reception in stride. I don’t know if that’s Ben’s fault or James’, but it’s a hindrance. Also, in most cases he’s in the secondary, he’s the biggest guy near him on most occasions, but James doesn’t run as hard as one would think for a person his size. He doesn’t finish runs the way Health Miller used to. Maybe I’m just spoiled from watching Roethlisberger and Miller work year in and year out, but it’s something that James could add to his game.

Also, I’m surprised we don’t see Sammie Coates stretching the field occasionally like we did earlier in the season. I wonder if we find out that his “broken fingers” are a more significant injury than we originally thought. I know he can’t run the whole route tree, and is a “one trick pony” but he was highly effective earlier in the season, and in the first match up against the Chiefs, I can’t imagine the Steelers wouldn’t want to use him as a weapon if he’s healthy and not in the dog house. I would think if he’s healthy enough to catch kickoffs, he’s healthy enough to catch passes.

When I found out Carl Cheffers and his crew were the referees for this game I was worried.

They called more penalties than any other NFL crew this year, and I figured that didn’t bode well for a Steelers team that ranked 27th this regular season in penalty yards per game. While they didn’t call many penalties, they sure made their impact felt. I respect that they let the game get settled on the field, I saw multiple pass interference and holding calls that they let slide. As a unit, they were fair, on the same page, and only called penalties that were blatant regardless of how it affected the game (like Sean Davis’ helmet to helmet penalty or Eric Fisher’s game changing holding penalty on James Harrison).

The punt and kickoff units stepped up and mitigated Tyreek Hill’s effect on the game as a returner. It seemed like some combination of backup linebackers were there to make the play on every kickoff. Vince Williams had a brutal hit inside the 20 on Hill, Jarvis Jones was consistently around the ball and Tyler Matakevich had a tackle as well. On punt team, Darius Heyward-Bey, who wasn’t targeted once as a receiver, had a tackle on Hill as well.

In fact, the worst special teams play of the night came from Justin Gilbert who ran backwards two yards on a kick return in the fourth quarter. Hopefully if we can keep him running the right way he’ll contribute more than Fitzgerald Toussaint was in the kicking game.

Without a doubt, the star of this game was the Steelers defense. Normally, when you look at the Steelers defense’s box score after they’ve played well there are a ton of tackles associated with the linebackers (that’s kind of what the scheme is predicated on).

But the Chiefs had a good game plan for their personnel going into this game (Andy Reid is a good coach after all). The Chiefs tried to make defenders on the edges and in the secondary make quick decisions and tackle effectively. Some great examples are the jet sweeps to Hill and the shovel passes to Travis Kelce.

They realized their line was going to struggle blocking players like James Harrison and Bud Dupree so they either game planned around it with motion, formations and play calling. That and our inability to score a touchdown kept them in the game. But those defenders that the Chiefs thought they could exploit? They stepped up.

They kept Hill and Kelce from gashing them for big plays, and tackled like a unit on a mission. James Harrison and Ross Cockrell led the defense with six tackles a piece, showing Reid and the Chiefs’ coaching staff that this unit isn’t as weak on the edge as they thought. The Chiefs scored three times and two of them were when they had short fields to work with.

If the Steelers defense can continue to play at this level, they might be the hottest defense left in the playoffs.

Classic Rock Song of the Game: Guns N’ Roses- “Welcome to the Jungle”