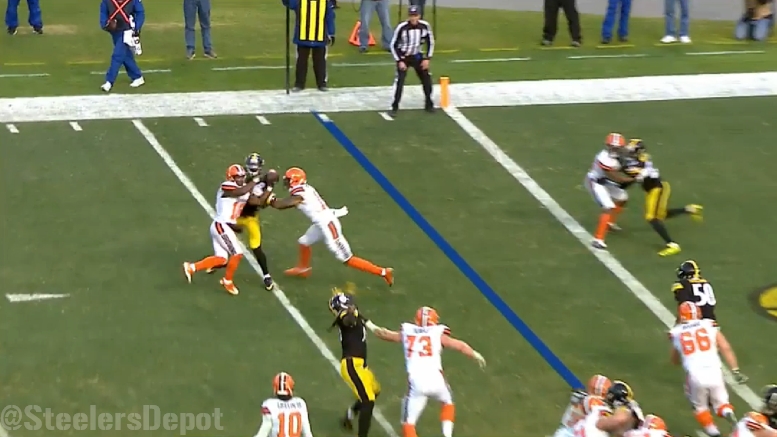 Earlier today, I mentioned that Pittsburgh Steelers 10th-year cornerback William Gay actually managed to receive an honorable mention in the “Defensive Back” category of Pro Football Focus’ meaningless All-Pro list. But it did get me thinking that we really have not talked much at all about Gay over the course of this entire season, so I thought it would probably be fitting to take a look at his play in the season finale.

Because I didn’t really pay attention too closely or too consistently to Gay over the course of the season in comparison to other players—I don’t believe I did even one film session on him this year, at least not during the regular season—it’s hard for me to speak too decisively, but while he made a number of his usual heady plays, it did seem that he may have regressed a bit.

I felt that more early in the season than late, however, so perhaps his move into the slot did him well, as I felt in his previous seasons when he was playing a lot of snaps both outside and in the slot that he was better served in the latter role.

He showed why against the Browns, and did so early. He broke up the third play of the game, on third and six. Cleveland showed a bunch formation with four receivers to his size of the field. Expecting the screen, he broke on his quickly and was there to nearly intercept it when the wide receiver couldn’t bring in the hot pass.

Later in the first quarter, on the second play of the Browns’ second drive, he continued to display what his veteran savvy and hours upon hours of film study bring to his game in diagnosing looks in given situations. On second and three, showing three wide on the left side, evenly spaced, he read the screen pass to the slot receiver and worked through the block of the player in the middle alignment to blow up the play for a short gain.

Of course, he didn’t make every play, and he was beaten by a rookie on third and five early in the second quarter. Showing a similar look to the last play, Gay this time lined up on the slot receiver, but got himself behind the receiver in the middle in his coverage, allowing him the middle of the field for the reception and then the angle to turn it upfield for 16 yards.

Still later in the second quarter, Gay made what may have been a touchdown-saving tackle on one of the several runs in which the Browns’ backs gained penetration into the second level.

Going deep into the game now, into overtime, Gay helped saved the game when he blew up the Browns’ second-and-goal play from the two. Once again, he worked through the block of the middle receiver once he read the screen, nearly breaking up the pass. Instead, the receiver caught it but had nowhere to go, and ended up running backwards for a 16-yard loss.

Gay’s knowledge of the game, and of this defense, is what has allowed him to play at the level that he has this late into his career. He showed in several of the examples above just how important the mental aspect of the game is to a sport that on the outside seems to be all about the physical.