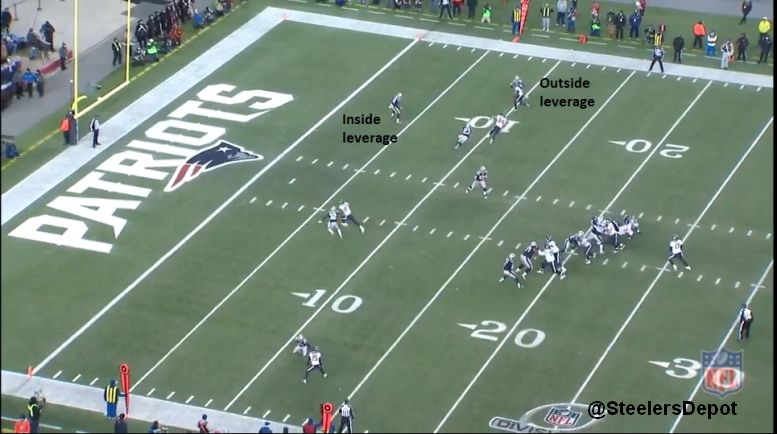 Across the board, the Patriots’ defense is underappreciated and might not even be getting the love the Steelers are because New England has played at a pretty similar level all year long.

The run defense is really good and by far the toughest task for the Pittsburgh Steelers in their playoff run. They allow just 3.9 YPC, tied for 8th in the NFL, and only six rushing touchdowns on the regular season, the lowest mark in the NFL.

In the regular season, they’ve allowed just 32 runs of 10+ yards, the lowest mark in the league. And only three runs of 20+, also the best in the league. The Steelers have had three of those in the postseason so it’ll be interesting to watch that play out.

The interior defensive line falls on three guys: Alan Branch, Vincent Valentine, and Malcom Brown. Branch and Valentine are the pluggers and Brown the more athletic pass rusher though the Patriots use an array of fronts that it’s not fair to classify anyone as just a three or one technique.

It’s a 3-4 defense but their ends fall along the hybrid spectrum. So it makes it tough to classify them. Trey Flowers usually has his hand on the ground and moves all over the formation. They often have a “Nascar” package where they remove all the interior defensive linemen and bring in their pass rushers: Flowers, Rob Ninkovich, Chris Long, Jabaal Sheard, Shea McClellin are the main guys. 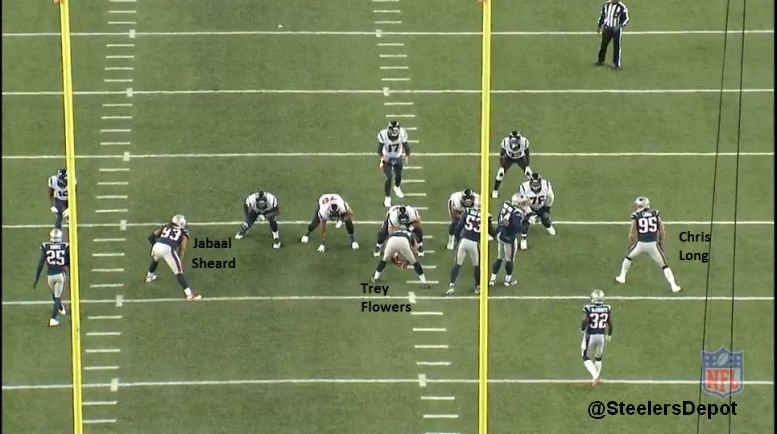 Their subpackages run deep, similar, though maybe even more complex, to what the Steelers saw from the Kansas City Chiefs a year ago. As become’s the buzz this week, they also use a 5-1 front with an ILB lined up on the line of scrimmage. 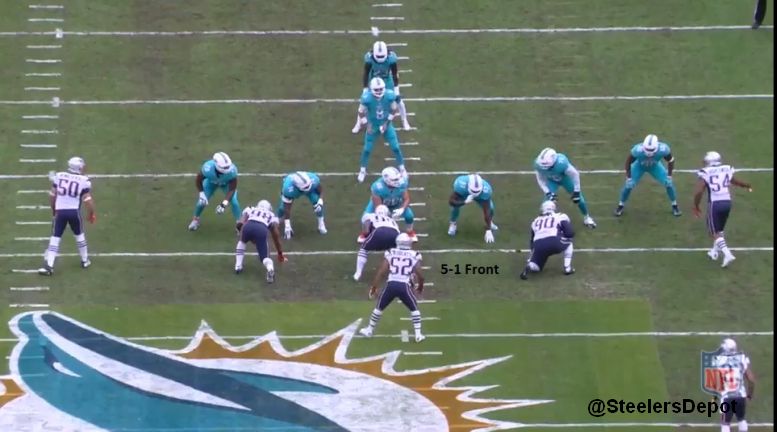 They have 34 sacks as a defense this season. 31 come from the front seven. Flowers leads them with seven but he hasn’t had a sack since October 30th. So he’s been in a drought.

Inside linebackers are Dont’a Hightower and Elandon Roberts. Roberts is a rookie but having a great year, his role expanded after Jamie Collins was shipped to Cleveland.

The secondary is really strong, too. They might be the only team in the league to have their top three tackles come from the secondary and somehow, in this case, it isn’t a bad thing. Logan Ryan, Patrick Chung, and Devin McCourty. in that order. To be fair, Chung spends a lot of time in the box.

They have 13 interceptions on the season. Malcolm Butler leads them with four and is their best corner. Ryan and Butler are the starting corners with Chung and McCourty as the starting safeties. Their sub-package players see so much time they’re basically starters. Eric Rowe and Duron Harmon jump in frequently.

Allowing just a 61.7% completion rate, 11th in the NFL, and they keep a lid on things with a 6.8 yards per attempt, tied 7th best. Their red zone defense is excellent, eighth best overall, ninth best at home, while opposing offenses convert just 37% of their third downs. That’s 7th.

So across the board, there are very few broad weaknesses with this Patriots’ defense.

Their goal is to take away your best passing threat and they’ll bracket him to do that. A “slice” call to make one defender responsible for outside breaking routes and one for inside ones. Like here last week against DeAndre Hopkins.

I think I said last time they were generally a zone team on early downs and a man team on third and short/medium. Seem a little more varied this time. Healthy dose of Cover 2, just like Pittsburgh, which again helps reroute their top threats and at the least, disrupt the timing of routes. 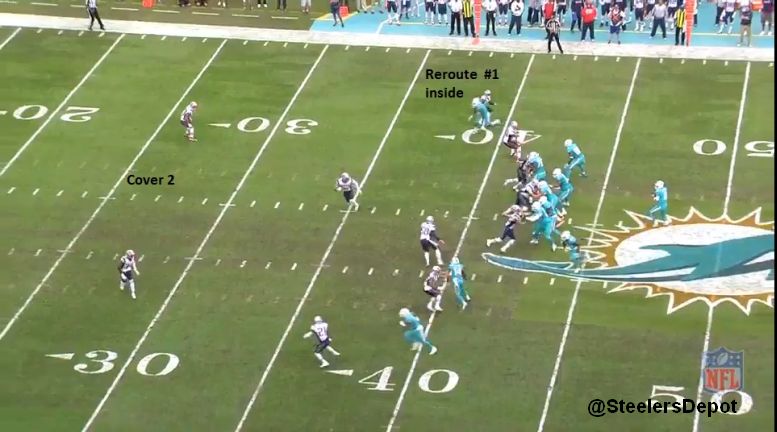 Also have Cover 1 Robber. Man coverage with a single high safety and a safety rolling down to rob any intermediate routes. 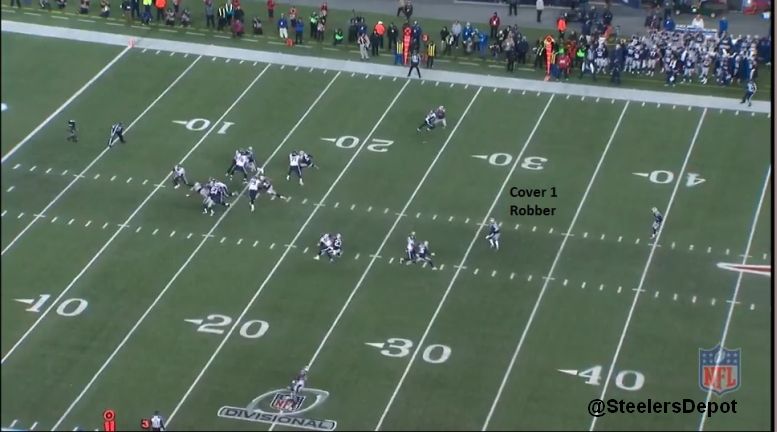 And an array of 2 Man, Cover 6/trap coverages, and some pattern matching that those who have studied it closer than I have. James Light and Zach Dunn are good follows on Twitter for that.

Not a lot of pressure and blitzes. Some games up front. They did run a nickel blitz against the Texans last week with Ryan getting a sack. Ninkovich’s stance gives it away. Stagger goes from left foot up to right foot up. Tells you he’s dropping. 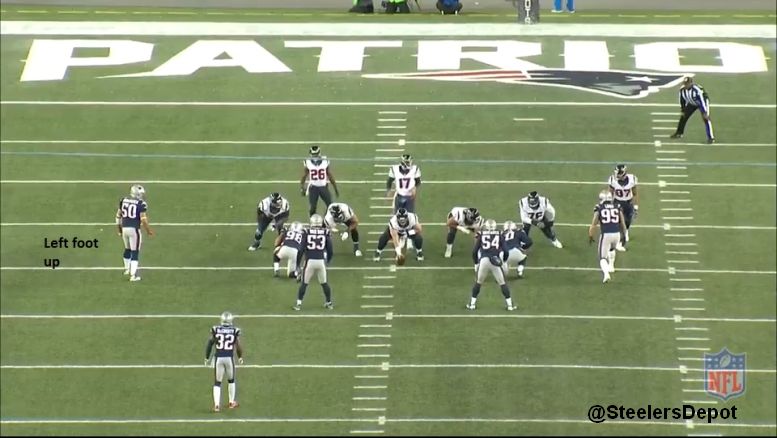 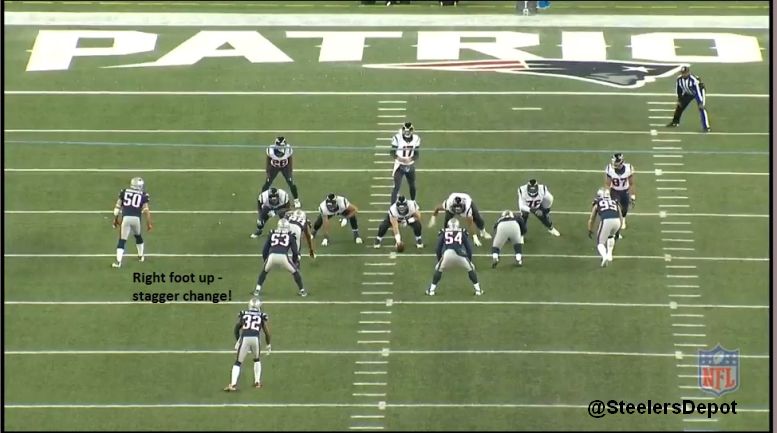 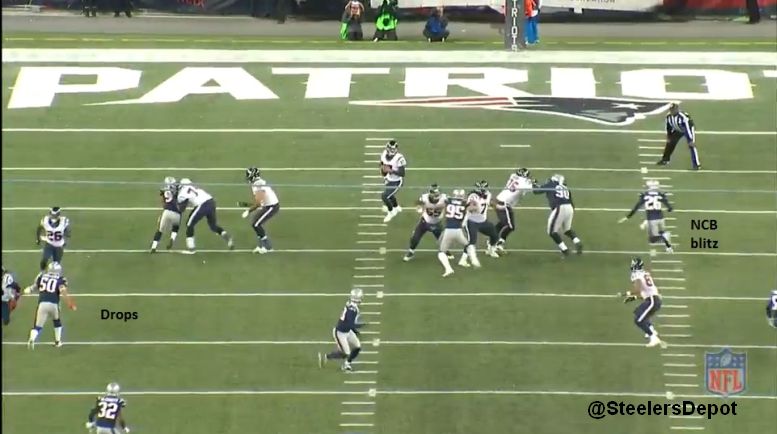 Matthew Slater and Jonathan Jones are the gunners with Slater being one of the best in the business. On the punt team, DB Brandon King and RB Brandon Bolden are the wings on punts with Nate Ebner the upback on punts. He’s another top special teamer and an Olympian rugby player.

Ebner has not run a fake in his career at the upback spot.

The Pittsburgh Steelers were destined to meet the New England Patriots in the conference championship game- and that day’s now upon us. The Patriots defense, behind a well-oiled offense that usually gets the party started, is ranked second only to the Arizona Cardinals (via Pro Football Focus); their defense against the run (2nd) and coverage (1st) is only hampered by their mediocre pass rush (24th). It should be a clash of the titans, so let’s take a look at their defensive culprits.

Their 4-3 base defense is anchored by the likes of Alan Branch and Malcom Brown. Both have played around 60% of the team’s total defensive snaps throughout the year, as they like to move their personnel around frequently. That being said, their defensive snaps are second to only Chris Long’s logged snaps. Both Branch and Brown bring a run-stuffing mentality to the table; both playing are 300+ lbs (Branch nearing 340!), and use their hand-to-hand combat to their advantage.

Take a look below to see what Branch is capable of; ultimately why the Patriots are so tout against the run. He lines up over the right guard, engages, stays in his zone, and attacks the ball carrier the second he enters his gap. He eats him up for the minimal 2 yard gain. 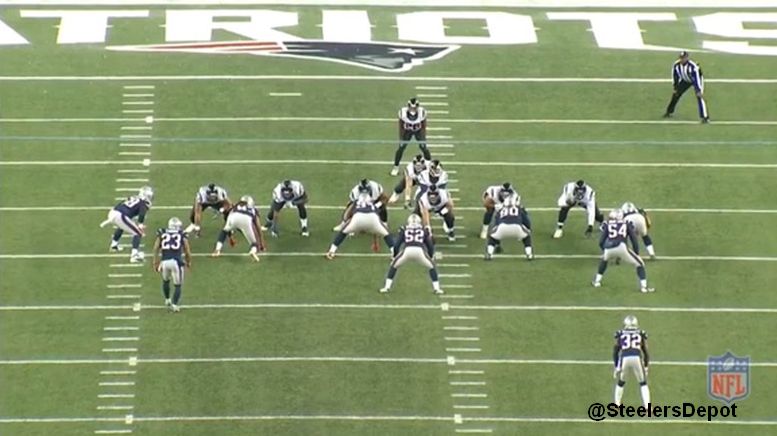 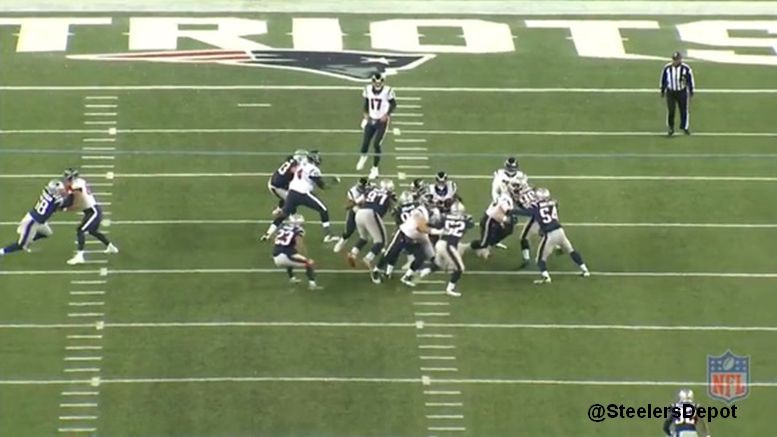 Branch has had an up-and-down career since entering the league in 2007 as a second round selection out of Michigan, but Brown has been absolutely stellar since being drafted in the first round in the 2015 draft. They combined for 6 tackles at or behind the LOS in their week 7 meeting, which is nothing out of the ordinary for these two monsters. Look for an interior battle all game long.

The edges, consisting of Chris Long and Trey Flowers have combined for a total of 12 sacks (5 for the former, 7 for the latter), and have both played incredibly well against the run. Although as a team they struggled in the pass rushing category, these two are always capable of having big games, in addition to their almost-certain run support; they’ve also combined for 43 tackles behind the LOS.

The ever-fearing Dont’a Hightower, Shea McClellin and hybrid Rob Ninkovich round off the linebacking group. Hightower has had yet another Hightower like season, recording 5 sacks and 36 stops, while adding 21 additional quarterback pressures. Ninkovich and McClellin have struggled from time-to-time. The former has assisted in the run department while adding 5 sacks, 19 total pressures, and 15 stops. The latter, McClellin, has struggled mightily since entering the league in 2012 in the first round out of Boise State. He’s recorded only 9 stops, 12 pressures, while also adding 5 missed tackles. He hasn’t played as a starter for the entire season, so I guess that could have played a factor. All three had their hands full in week 7 (against an offensive line that was missing Marcus Gilbert), as all three recorded negative grades. It’s worth noting that it was one of only three negative games Hightower experienced all season long. This offensive line is grooving as of late, so it could be his fourth on Sunday afternoon.

Ninkovich (#50), the hybrid, can do some pretty funky things, though. Take a look below. He starts lined up over the center, and quickly moves to the left side before the snap of the ball (his pre-snap movement is enough to put any offensive line into a douzy). He shoots the tackle back about 5 yards before barreling down on Brock Osweiler– ultimately recording the vital 3rd down sack. 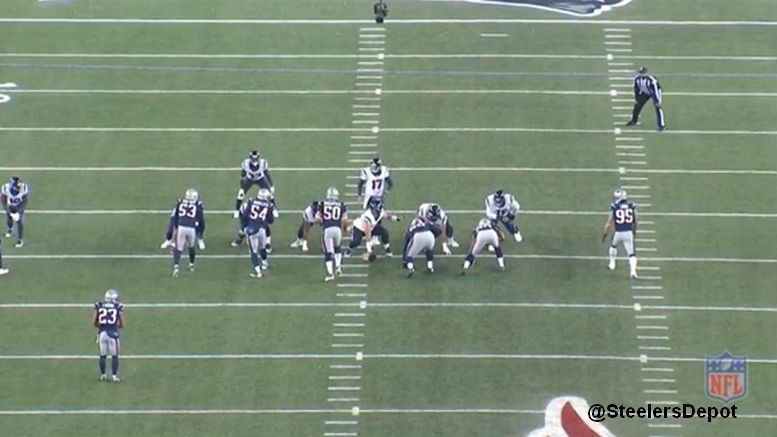 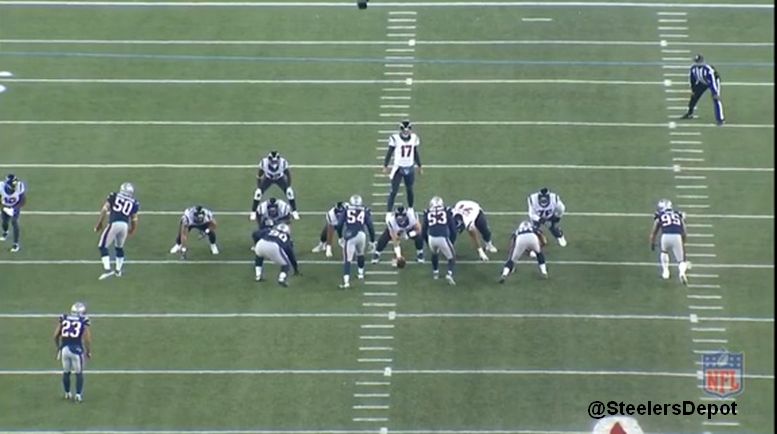 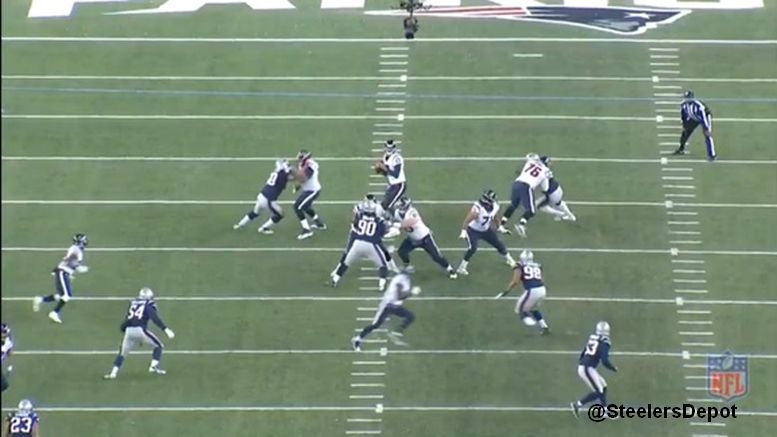 Saying the secondary has played impeccable all season would be an understatement. Lead by Malcolm Butler and Devin McCourty, it’s not difficult to see why they’re yielded so much success in 2016. Starting with the former, Butler has built a sound foundation since entering the league in 2014 as an undrafted free agent. He’s improved in each of his three seasons- I’ll spare you his stats from week 7, since a Landry Jones-lead offense is a bit different than a Ben Roethlisberger-lead offense. Taking a look at his best game, though, we see a week 6 clash with the Cincinnati Bengals. Butler allowed only 3 receptions on 7 targets for 17 yards, while recording 4 batted balls! He’ll have his hands full with the likes of Antonio Brown and a healthy Roethlisberger dialing him in.

Opposite Butler is Logan Ryan, who has played a stellar year in his own right in coverage. Looking at last week’s Divisional round, he allowed a quarterback rating of 10.7 with 3 receptions on 7 targets for 9 yards, an interception and 2 batted balls. Again, this was against the likes of Brock Ohmygodwhocares, but it still validates him as a player who doesn’t skip a beat.

The safeties, consisting of the aforementioned Devin McCourty and Patrick Chung, do their part in their stellar secondary. McCourty’s experienced his best grades against the pass (again, via Pro Football Focus), while registering 72 tackles and 17 stops. Outside of week 1, he hasn’t registered a negative game all year long! Talking about another player who doesn’t miss a beat, he allowed a single reception on 4 targets for 2 yards while also adding an interception. Ben’s going to have to use his eyes and big ol’ pump fake to his advantage on Sunday.

Chung has struggled some, while is a bit out of character for him. He’s recorded 10 missed tackles, and only 22 stops- not that impressive for a run-supporting Strong Safety. His coverage hasn’t been great, routinely taking off angles that put him in bad situations.