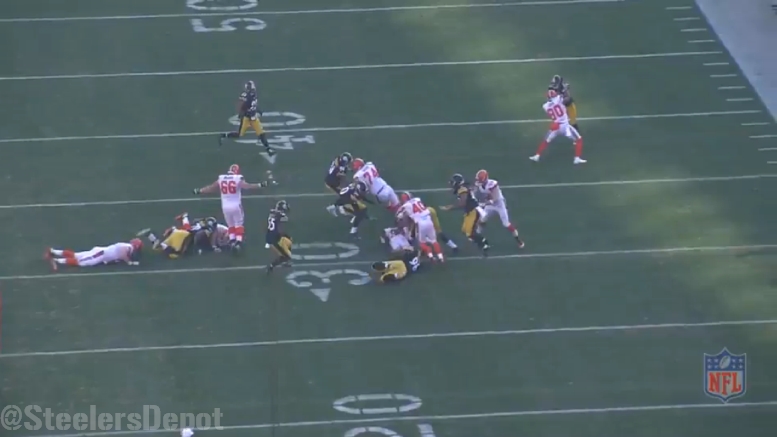 While Stephon Tuitt is expected to return to the starting lineup for the Pittsburgh Steelers, Ricardo Mathews has been ruled out for Sunday’s Wildcard game against the Dolphins, which means that second-year defensive end L.T. Walton is going to continue to play a major role for Pittsburgh’s defensive front.

When Mathews was healthy, Walton was still taking a heavy dose of the snaps, including pretty much all of the 3-4 front snaps and some in the nickel as well. Now he is going to be the clear starter, although his nickel snaps can be reduced with Tuitt’s return to pair with Javon Hargrave.

While Walton has not offered much in the way of a pass rush, I have been impressed with his development overall as a 3-4 defensive end, and he has played the run pretty well. He has even managed to make a couple of plays for himself lately.

He helped shut down a Browns drive in the first quarter after they hit on a 19-yard play. Approaching midfield, on the next snap, Walton—in the nickel—showed quickness and power in his punch off the ball, driving the right guard back, influencing the lane for the runner, and shedding the lineman to make the tackle after a two-yard gain.

Midway through the second quarter, the Steelers showed their faux-4-3 look, with the nose tilted over the center to the defensive right, and both ends to the left, the left outside linebacker dropped back to the second level. Once again, Walton won the battle with the right guard immediately, on virtually the same play, only this time he came off the blocker quicker and made the tackle for a loss.

The drive did continue after a third-down conversion two plays later, on which Walton looped around the center and tried his best to disrupt the throwing lane, to no avail. On the subsequent snap, however, he and Bud Dupree ended up getting tangled, sending him to the ground and leaving open a gaping running lane.

As I mentioned, Walton doesn’t offer a ton in the pass-rushing department, but I have noticed that he shows awareness of the pocket and keeps his eyes on the quarterback, watching his eye and body movement to dictate the timing and direction of a jump. That was the case on a play early in the fourth quarter.

Early on in overtime, with injuries mounting, Walton was running with Daniel McCullers in their nickel defense—their two least athletic linemen—but this happened to be a run on a draw, and they combined for the run stop. Walton did a good job of working off a block in this instance.

Due to injuries to the defensive line in the second half of the season, second-year defensive lineman L.T. Walton has gone from a weekly inactive to a valued rotational player who is key to their 3-4 front and contributes in the nickel as well. I don’t know that his ceiling is much higher than it is now, but he has done a serviceable job in stepping up and developing when the Steelers needed him to.