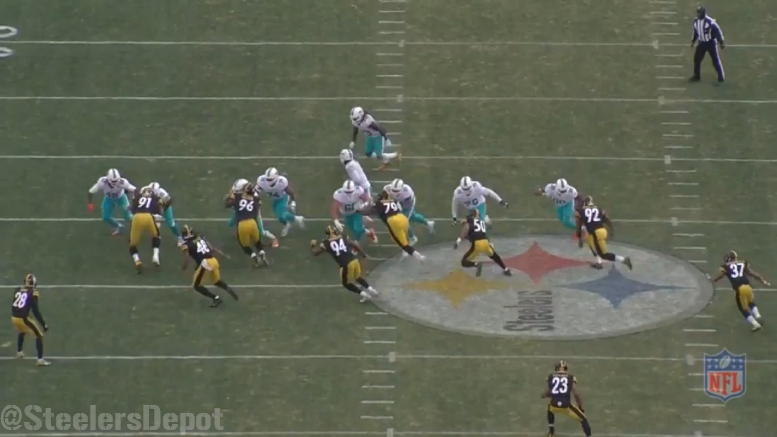 Continuing our day that I’ve largely arbitrarily chosen to call #FilmRoomFriday, I’m going to take another look at Pittsburgh Steelers second-year defensive end L.T. Walton, who ever since Cameron Heyward’s injury has had to take on a far more prominent role in the defense. Further injuries since then have only strengthened the team’s need for him to play, and to be reliable.

Walton was a sixth-round draft pick during the 2015 NFL Draft, and was largely considered an afterthought. During his rookie training camp, there was some lively debate as to whether or not he would even make the 53-man roster, and he spent every game in which there was not an injury along the defensive line on the inactive list.

That appeared to be the fate he would endure once again in 2016, but opportunity presented itself due to injuries, as previously mentioned, and he has for several weeks now been logging significant playing time, and earning it by continuing to improve his game.

That improvement continued to be evident on Sunday against the Dolphins, during which he played a major role in limiting running back Jay Ajayi to well under 50 yards on the day after rushing for over 200 yards in their previous meeting.

On the second play of the game, with Walton lined up over left tackle, he showed excellent hand placement and pad level, controlling the lineman and squeezing the gap, forcing Ajayi to try to squeeze through a narrow crease. He shed the block to contribute to the tackle, though he was not officially credited for it.

In the early stages of the second quarter, the Steelers presented their tilted nose look with both ends on the same side of the field, Walton in the defensive left-side B Gap. The second-year man initially appeared to get locked up at the line of scrimmage, but was able to flow down the line against a zone run and clogged the gap on a two-yard run. This is another play on which he received no statistical credit.

Later on that same drive, the defense showed a traditional 3-4 front with him at the right defensive end spot. Shaded on the inside shoulder of the tackle, Walton was actually able to penetrate the gap, but the back was able to spin out of initial contact. It’s a tough ask here but you’d like to see him finish this play.

Early in the second half, it was another look at the tilted nose, Walton back in the defensive left-side B Gap against an eight-man line with three tight ends. Again, he showed control of his gap and even appeared to use the right tackle to obstruct and clog the running lane, credited with the tackle for a three-yard gain.

There have been some saying recently that Walton may well be the Steelers’ most-improved player this year. While he may not play as prominent a role as some other worthy candidates, you certainly can’t dismiss the ground that he has made in the past couple of months.