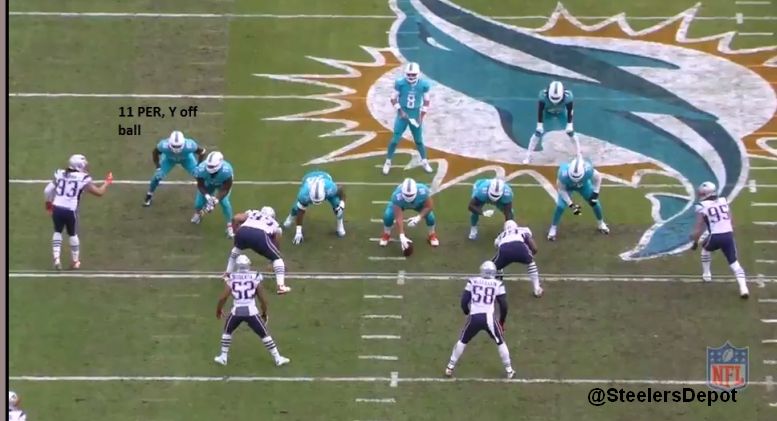 Don’t think the Dolphins are a drastically different team than they were when they beat up on Pittsburgh back in Week 6. Still everything going through that run game with a strong offensive line, tight ends that get physical, and a really good back (I’ll let Omar Kelly tell me how good he is).

Jay Ajayi is averaging 4.9 YPC this season, though he has fumbled the ball four times in 260 attempts. Rookie Kenyan Drake, a much more explosive player, is getting involved in the offense. He averages 5.4 YPC nad has 13 carries over the past three games. Had a long touchdown run against the Buffalo Bills in Week 16.

Dion Sims is the defacto fullback when called upon but they’ll also use RB Damien Williams in that spot in some short yardage situations, giving them the ability to run a fullback dive.

On the season, the run game has been one of the most successful in the NFL. 56 runs of 10+ yards is sixth in the league while their 12 runs of 20+ yards is tied for seventh. Ajayi is responsible for 10 of those, tied for third in the league. Overall, their YPC of 4.5 is good enough for being tied 7th in the NFL.

The line is generally what the Steelers saw before. The one difference is Kraig Urbik, the former Steeler, is now the starting center with Mike Pouncey’s season over. That’s an obvious downgrade. The projected starting five.

The Dolphins, like seemingly a lot of teams, are using tackle eligibles in their run game. That guy will be #79 Sam Young, listed at 6’8 315. They’ve even done some extra creative things, bringing Young in the game and then running an unbalanced line, shifting the right over to the left side. 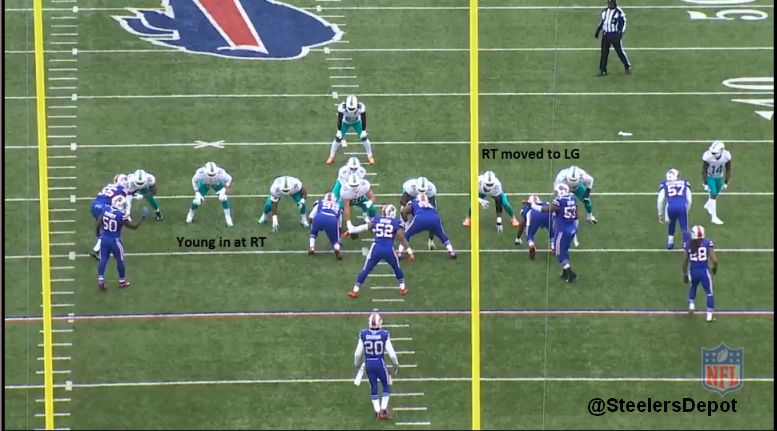 Against the Bills, Miami had a strong tendency to start every play of their possession in 12 personnel. And then move to 11 personnel on the next play. It varied more last week against New England but something to keep in mind.

As a run game, they’re a heavy inside/outside zone team with a little bit of power mixed in. But a physical, talented bunch, who don’t need to get super creative.

One other tendency to look for. When a Y tight end is lined up off ball, look for a split zone. Rarely did anything else, especially any sort of run concept. 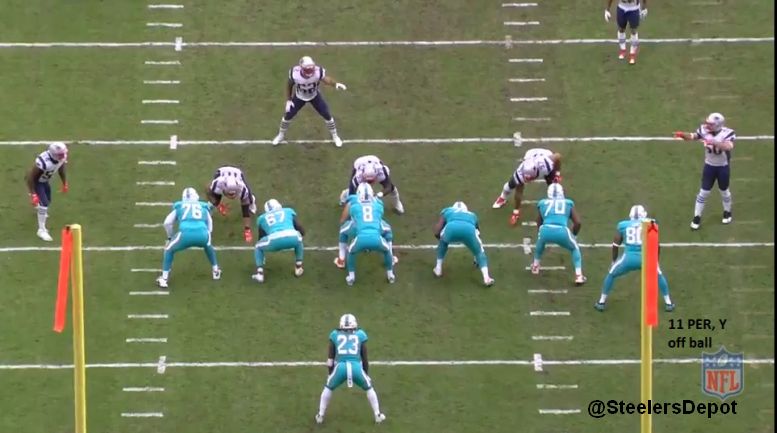 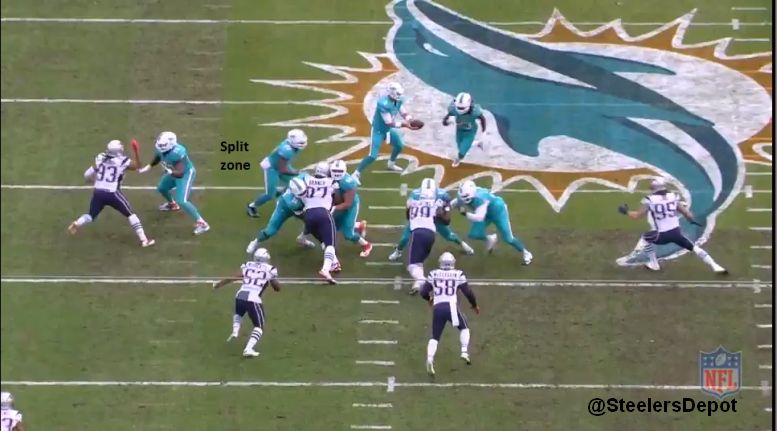 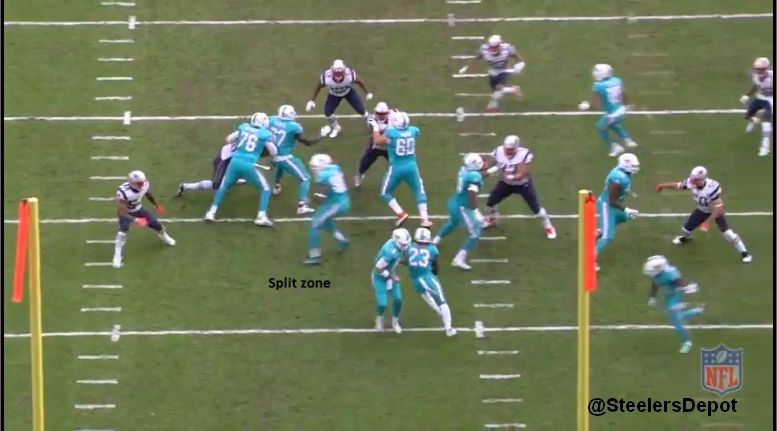 Again, not a whole lot of differences, even with Matt Moore. It’s a run first offense, carrying the rock on about 2/3 of all 1st and 10 runs since Moore took over.

The goal of the offense is to run the ball well, get into short yardage situations, and then using spacing concepts to move the sticks.

That doesn’t mean, however, they don’t have any lack of a vertical offense. Enter Kenny Stills, who is only catching 52% of his targets but is averaging 17.3 yards per catch and nine touchdowns. Jarvis Landry falls on the opposite spectrum, a Hines Ward type player with the energy and blocking ability he brings, offering sure hands too. He’s catching nearly 72% of his receptions while still averaging 12 yards a grab.

They’ll using crossing/over routes with the Y or the X, which the Steelers have gotten better at throughout the year.

And again, they’ll go to empty and get the ball out quick with simple spacing concepts. Moore has done a nice job of not holding onto the football – only one sack in 87 attempts.

When they get into negative yard situations, an unsuccessful first down play, they immediately look for their playmakers. That’s Landry, getting him the ball on a screen or high percentage play to try and gain that back.

Jakeem Grant is their man kick and punt returner. He’s an aggressive, shifty rookie, only calling three fair catches on 23 attempts. 8.3 yards per punt, 23.1 per kick, but one of the most dangerous open field guys in my book.

On the field goal unit are a pair of TEs, MarQueis Gray and Dion Sims. Their kick return unit is a 6-2-1-2.

It’s the first round of the AFC playoffs, and it’s a familiar opponent making its way to Heinz Field for the Sunday afternoon showdown at 1:05 p.m.

The Miami Dolphins ride into the playoffs with a record of 9-7 and having already topped the Pittsburgh Steelers 30-15 back in Week 7 in Miami in a game in which the Steelers offense looked dreadful for the most part, while the defense seemingly couldn’t stop Miami running back Jay Ayaji.

A handful of key players missed that game back in October, so now is the time to avenge that loss for the Steelers, who appear as healthy as they’ve been all season and seem to be firing on all cylinders offensively.

Coming into Sunday’s playoff matchup, the Dolphins will be without quarterback Ryan Tannehill and center Mike Pouncey, forcing backups Matt Moore and Kraig Urbik into action at two of the most important spots in an offense.

Moore is what he is at this point in his career:  a solid backup who can manage games, not turn the ball over and make the occasional throw to take the heat off of a running game.

For the most part, that’s what he’s done since taking over for Tannehill in Week 14. In that span of three and a half games, Moore has thrown for 721 yards, completing roughly 63 percent of his passes to go along with eight touchdowns and three interceptions.

In that same span, Moore has been sacked just once, so the group up front has done a good job of protecting him. That being said, they’re asking him to get rid of the ball quickly to receivers Jarvis Landry, DeVante Parker, Kenny Stills and tight ends Dion Sims and MarQueis Gray, so that sack number should be very low, considering what the Miami coaching staff is asking him to do.

Most of the throws Moore makes are simple throws like this one here off of a play-action fake to Ajayi.

Because the Dolphins have run the ball well this season, Miami is able to work in a lot of play action, making for short, easy throws for Moore.

While Moore is a lesser passer than Tannehill, this is still relatively the same offense built on a strong running game and a short passing game, allowing dynamic weapons like Landry, Parker and running back Damien Williams to run after the catch to create big plays.

Notice something common in both of those clips above? A plethora of missed tackles. Earlier in the season Pittsburgh missed 17 tackles against the Dolphins.

Most of Miami’s explosive plays have come on plays where guys simply run through a number of tackles into the open field, which is a testament to some of the Dolphins’ key players, starting with Landry and Ajayi.

I mean, I don’t know what to say about that run. The effort by Buffalo was terrible, but Ajayi is a powerful, balanced runner who makes plays like this on the regular. In fact, Ajayi forced 58 missed tackles alone this season, leading the league by a wide margin.

That being said, Ajayi’s impressive numbers this season came mostly in three games where he rushed for 204 against Pittsburgh and then 214 and 206 against Buffalo in both matchups.

That’s nearly half of his season output in three games (1,272 total rushing yards). Outside of those three games, Ajayi cracked 100 yards once while rushing for less than 60 yards eight times.

He’s maddeningly inconsistent game-by-game, but he’s a dynamic threat with the ball in his hands.

Up front, Miami will have a different look from the last matchup with no Pouncey holding down the middle.

Here’s how the Dolphins are projected to look left to right on Sunday:

The left side of that line has been very, very good this season as Albert continues to play at a high level, while Tunsil has showed his high potential all season long for the Dolphins.

In the middle and on the right side is the big concern for the Dolphins, who struggle to run that way and really have issues with protection at times. If there’s one area the Steelers defense can exploit on Sunday, it’s the right side of Miami’s line.

On special teams Miami is mostly solid, starting with kicker Andrew Franks, who has missed just five kicks all season and has hit game-winners in two of the last four weeks to keep the Dolphins in the playoff picture.

At punter, Matt Darr has put together a quietly solid season, averaging 44.3 yards per punt on 90 attempts this season, often punting in bad conditions in Miami. Of those 90 attempts, Darr has dropped 32 inside the 20-yard line, serving as a weapon for the Dolphins on special teams.

In the return game, Landry is a threat to take back any punt he gets his hands on due to his shiftiness and sheer determination, while rookie Jakeem Grant already has one punt return touchdown on the year.

On kickoff returns, Grant and fellow rookie Kenyan Drake split duties as Drake already has a return for a touchdown while averaging over 30 yards per return on the year.

Miami has playmakers on special teams who can bust a game wide open, so it’s imperative of the Steelers special teams units to be on top of their games on Sunday if they want to keep their playoff run alive.