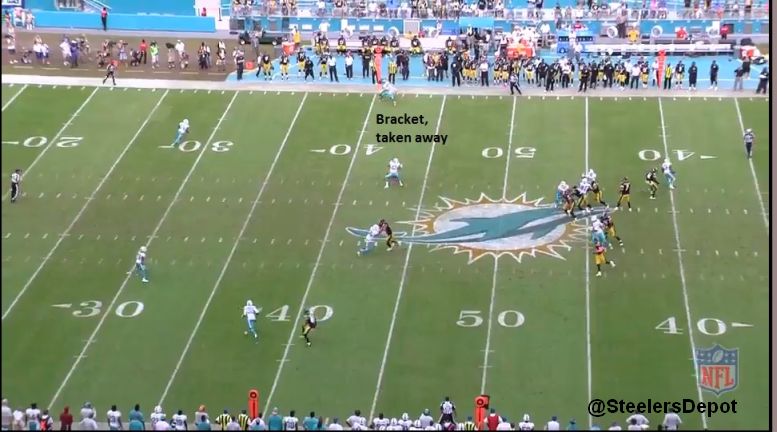 Generally speaking, the Dolphins are a similar front seven to where they were in the previous matchup. I don’t think there was anything that shocked me. Only mild surprise was an apparent demotion of nose tackle Jordan Phillips. Earl Mitchell has been starting for at least the last two weeks. Ndamukong Suh is still the dangerous three tech.

Cameron Wake and Andre Branch are at the ends while Jason Jones can play all over, on the outside or the interior. Our old pal Nick Williams, the kid out of Samford, is now with the Dolphins and has been playing the three for them as part of their rotation.

As a defense they have 33 sacks this season. Wake leads the group with 11.5, registering one in each of the last ten games. Pretty impressive streak. In all, the DL has 27.5 sacks while the defensive backs have three.

At linebackers, Donald Butler is the SAM, Kiko Alonso the MIKE, and Neville Hewitt the WILL. #53 Jelani Jenkins is trying to work back from injury so watch his status.

The run defense has been surprisingly poor. They’ve allowed 63 runs of 10+ yards, third in the NFL, and 17 runs of 20+, which is second worst. Overall, they’ve given up 4.8 yards per carry, tied for the worst mark in the NFL with the San Francisco 49ers.

This unit has taken a beating lately. Lost their best player, Reshad Jones, in the Steelers game, and then lost underrated safety Isa Abdul-Quddus a few weeks ago. He’s done for the year. And LCB Byron Maxwell is slow in recovering from his injury and is looking increasingly unlikely to play Sunday. So that’d be a big blow.

At cornerback, that would mean Xavien Howard and Tony Lippett to be the starting outside corners with Bobby McCain inside. The Dolphins have already said they won’t be shadowing anyone, choosing to play sides. Howard will be the LCB, Lippett the RCB. Lippett is having a nice season, though it’s come with rough stretches, but leads the team with four picks.

As a team, they have 16 interceptions on the season and getting that from a lot of different sources.

At safety, expect to see Michael Thomas and Bacarri Rambo, provided he’s healthy enough to play. It’s all to say that the Dolphins’ secondary, which wasn’t terrible this year, isn’t in a good place right now.

Coverage wise, it’s a lot that we’ve seen before. Lot of 2 Man and man-free (Cover 1) while they’ll drop into a true Cover 2 (and sometimes the nose tackle into coverage) in “and long” situations. Like here on 2nd and 20 against the Buffalo Bills in Week 16. 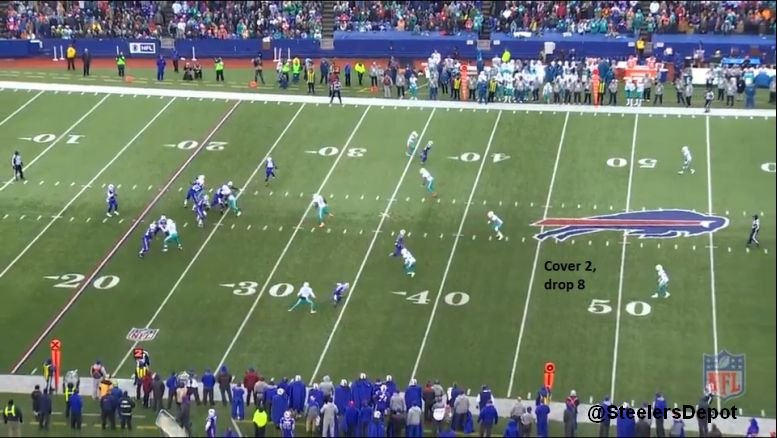 But it was their 2 Man concept that got the Steelers into a lot of trouble in that first meeting. Underneath man coverage (trail technique) with a two high look over the top. Bracketed and eliminated Antonio Brown. Here are examples. 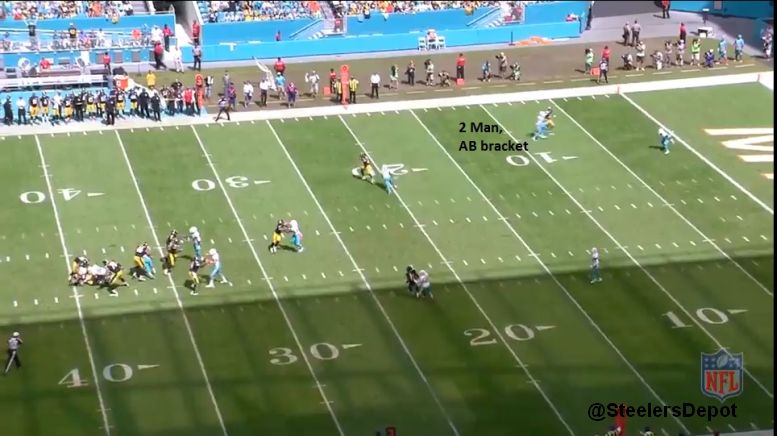 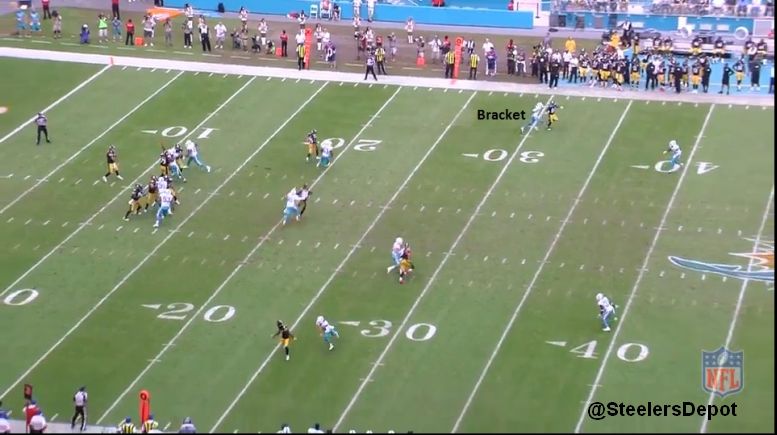 It’s not too dissimilar from what the Bengals like to do, coverage wise at least, and why Ladarius Green needs to have a big game. Be that middle of the field threat to take advantage of the split safety coverage. That’s the number one goal of this offense. Number two is to move Brown around more than last time to free him up, change his split, create free releases, and make him a bigger part of the offense. That’s on you, Todd Haley.

Running back Damien Williams and linebacker Spencer Paysinger are the wings on punts. Safety Michael Thomas is the upback.

There is size/length on the field goal block unit with Jason Jones, Suh, and Phillips along the interior.

CB Walt Aikens has a blocked punt this season.

Wildcard weekend is upon us, and the Steelers will be able to avenge their in-season blunder against the Miami Dolphins. Understandably, injuries and other various variables played a role in their demise, but the fact still remains; they need to go out there and take care if business.

Since their last meeting, the Dolphins’ defense as a whole has struggled some, only registering an overall positive grade in the pass rushing category- other than that, they’re ranked 23rd via ProFootball Focus’s grading standards. Let’s take a look at the individual culprits who will attempt to recreate that early season victory.

The defense line, consisting of Jordan Phillips, Cameron Wake, Mario Williams and the incredibly dominant Ndamukong Suh, who PFF’s 3rd highest interior defender this season with a grade of 88.4, and also 3rd in stops by a DT with 43. It’s safe to say the Steelers’ offensive line will be highlighting his play in tape study sessions this week. He ended the year with a total of 6 sacks, 10 huts, 41 hurries, and registered only one missed tackle.

He eats gaps for breakfast, linemen for lunch, and ball carriers for dinner. His added run-stopping dimension is something new, as his first three years in the league yielded incredibly poor results in the said category. Since 2013, however, he’s improved each year and is now among the top 5.

Looking at his filling of gaps below, we see regularity for Suh. Positioned in the B gap on the right side of the offense line, he engages right away while pushing his man backwards- as if he was benching the opposing player. He sniffs out David Johnson in the backfield (something that’s not so easy to do, mind you), pushes his man aside like a rag doll, and wraps him up for the stop. Ramon Foster and David DeCastro are surely aware of his dominance, and need to come prepared or they may end up like this. 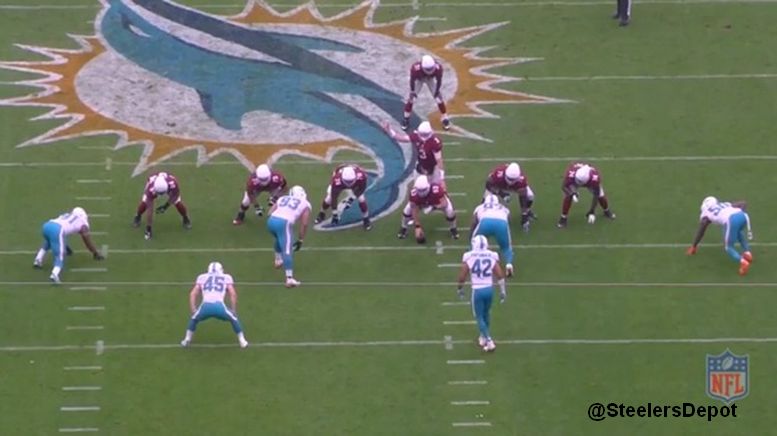 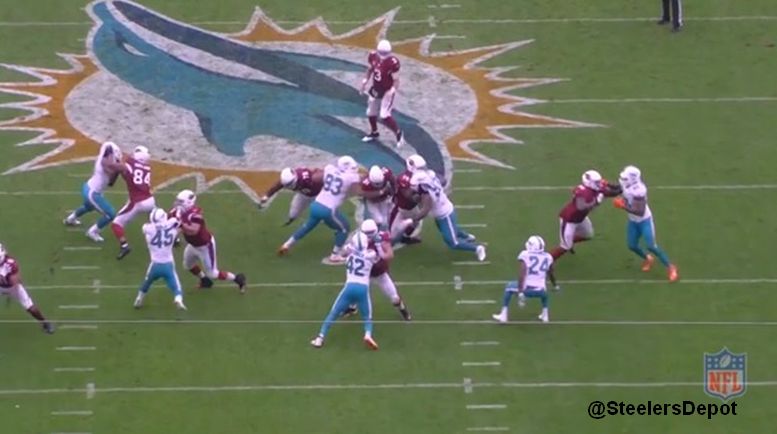 The aforementioned Jordan Phillips is his counterpart within their 4-3 defense, who struggled immensely against the run amidst Suh’s dominance. He was also a flag-magnet, routinely getting called for penalties. Throughout the year, he only registered 3 positive games, 2 of which were after their week 6 clash with the Steelers. He ended the year with no sacks, 3 hits, 23 hurries, and 10 stops- it wouldn’t be an issue if he did unseen, off-the-record, behind-the-scenes dirty work, but that wasn’t the case.

Mario Williams has experienced a trying year; he was routinely subbed out for Andre Branch– look for this trend to continue on Sunday afternoon. Branch’s season has had its ups and downs, as he registered 7 positive games (only 3 came post week 6), but also 6 incredibly poor games. It’s unknown who will show up in Heinz Field, but it’s clear that he’s someone who can be targeted by the offensive line in the run game.

Cameron Wake has had yet another stellar season at the age of 35, as their version of James Harrison racked up 13 sacks, 10 hits, 43 hurries and 22 stops! He struggled a bit against the run, but it’s clear he has a lot left in the tank after experiencing an injury that cut his 2015 season short. Funny enough, until their week 6 meeting against the Steelers, Wake only had 1 sack; since then, he’s been on an absolute tear, recording at least 1 sack in 8 of his last 10 games, including 3 multi-sack games. Marcus Gilbert will definitely have his hands full.

Looking below we see he’s more than just a sack machine- he has a knack for the ball. Starting hand down at his usual left end position, he recognizes the run to the right and engages with his blocker. Feeling out the fielding of David Johnson, he disengages and quite literally punches the ball out, and recovers it himself. Talk about swinging momentum on what looked like a routine play. 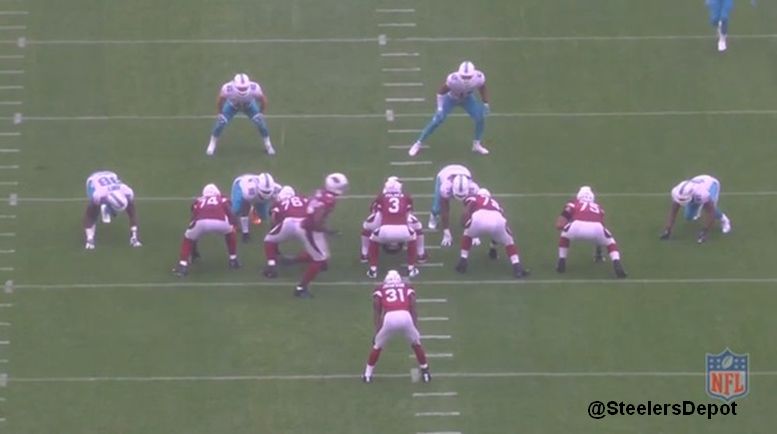 The linebackers, consisting of Kiko Alonso, Donald Butler, and Jelani Jenkins, have struggled to say the least. Starting with the central anchor, Alonso, we see a player who was good for a missed tackle a game, and was routinely swallowed up by second-level blockers. He struggled in coverage, and just wasn’t instinctual enough to make the plays where they needed them. If Ladarius Green is given the green light on Sunday afternoon, look for them to create and gauge some mismatches.

After having an impressive rookie and sophomore season, Donald Butler has slipped into mediocrity. The only category he made some sort of a positive impact was his pass coverage, which even then, wasn’t very strong. He, like Alonso, was swallowed up by blockers, and wasn’t able to assist in the pass rush, either.

Jelani Jenkins echoes similar sentiments. Struggling against the run was something of the regular for Jenkins, but it was his aerial coverage that was his true Achilles heal. He’s unable to stick with his assignment, and is habitually beaten on a game-to-game basis. Again, if Green passes concussion protocol, these three linebackers will be pulling out their hair.

The secondary isn’t as strong as their defensive line, but doesn’t struggle as much as the linebackers. Lead by former Legion of Boom member Byron Maxwell, this group has a few up-and-coming players. Starting with Maxwell, we see a player who really bounced back from a poor 2015 campaign. He’s had his second best year since entering the league back in 2011; one of his better games this year came against the Steelers in week 6. On 8 total targets, he allowed only 4 receptions for 29 yards and an amazing 4 batted balls. Ben Roethlisberger and Antonio Brown hope to change that success on Sunday afternoon.

Opposite Maxwell has usually been Michigan State product, receiver-turned-cornerback Tony Lippett. He’s had an up-and-down year, but it’s interesting to note that he’s been a bit of a liability against the run. This can be taken advantage of, as he regularly breaks to the inside when he has outside contain. During their last meeting, he allowed 3 receptions on 6 targets for 35 yards, allowing a quarterback rating of 68.1. It’s also worth nothing that he leads the team with 4 interceptions.

The safeties, Bacarri Rambo and Michael Thomas have been something of weaker links throughout the season. Starting with the former, Rambo has struggled in each facet of the game since entering the league out of Georgia in 2013. The latter has experienced some positivity, but definitely not in the coverage category. Again, look for the tight ends to expose any type of coverage that Ben and co. see on Sunday.