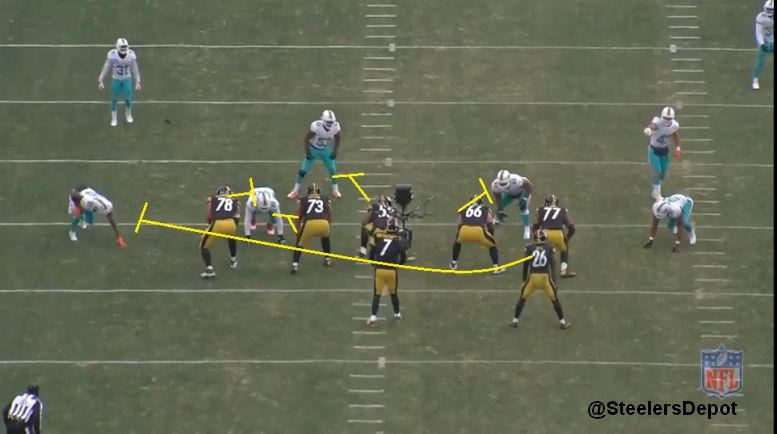 Le’Veon Bell had the best statistical rushing performance in Pittsburgh Steelers’ history against the Miami Dolphins. A lot of that was on Bell for his patience, vision, and ability to finish runs. You can also thank the offensive line for doing a great job and Mike Munchak for throwing wrinkles into their run scheme to get Bell in space.

At least twice, Munchak pulled out his dart scheme. And they had a high degree of success. Let’s take a look.

If you’re not familiar with dart, it’s a power run with the backside tackle pulling. Down blocks to the front side, just like in a “regular” power/trap run we’re accustomed to seeing. Backside tackle kicks out the frontside EMOL.

Here’s one look. Steelers in 13 personnel with Chris Hubbard as sixth linemen. Here’s the blocking scheme. 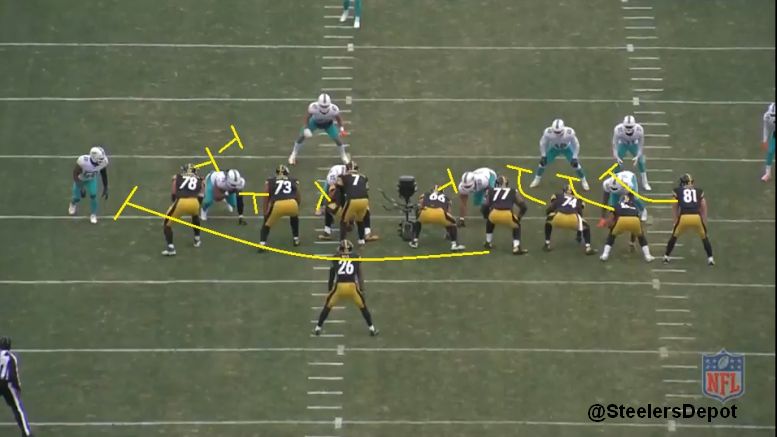 Like any power scheme, the key here is the frontside down block. Have to secure it and get a push at the line so he can’t get penetration and blow it up or force the puller wide and slow down an already slow play. Villanueva does a great job on the down block, showing a lot of strength, and washing the three tech. 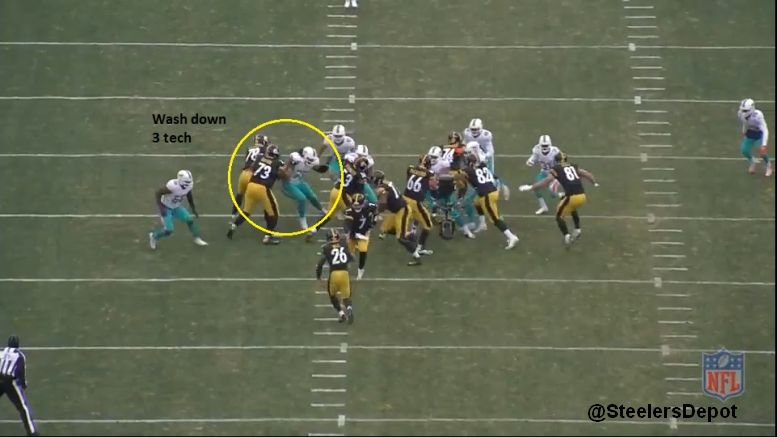 Gilbert now just has to clean up the EMOL, the playside end, and does a good job. He tries to contain the run but Gilbert is able to seal him and create an alley for Bell. He does most of the rest though credit to Antonio Brown for the stalk block on the corner. 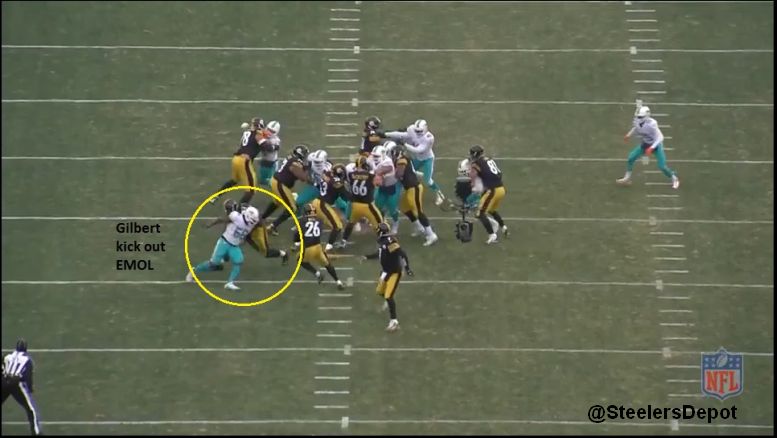 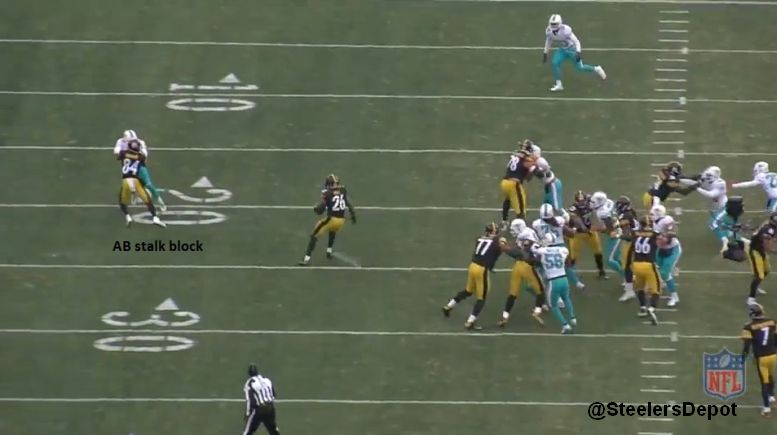 Pittsburgh busts it out again in the third quarter. One back and the Steelers in the gun out of 11 personnel and tight end Jesse James flexed out to remove another defender from the box and lighten it. Just six men there.

Again, key block here is the frontside down block to secure the three tech. Villanueva does a great job on the down block, showing a lot of strength, and knocks him off his feet. 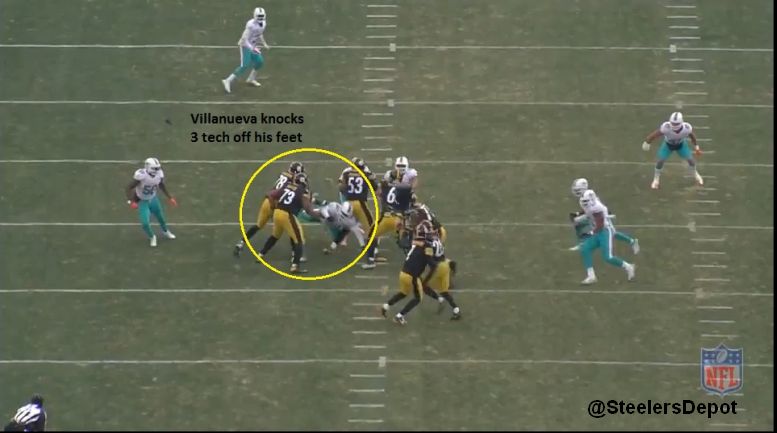 He then works to the next level to seal off the MIKE but with the MIKE coming up the A gap, and the fact Pouncey can work to him because there’s no backside linebacker to climb to – the Steelers have removed him from the box – Pouncey picks him up.

Now the key block is Gilbert. The frontside defensive end tries to adjust from getting sealed last time by wrong-arming Gilbert, crashing inside so he can’t get sealed. But he goes to the ground, Gilbert buries him, and Bell has the strength to stiff-arm away from the backside defenders crashing. 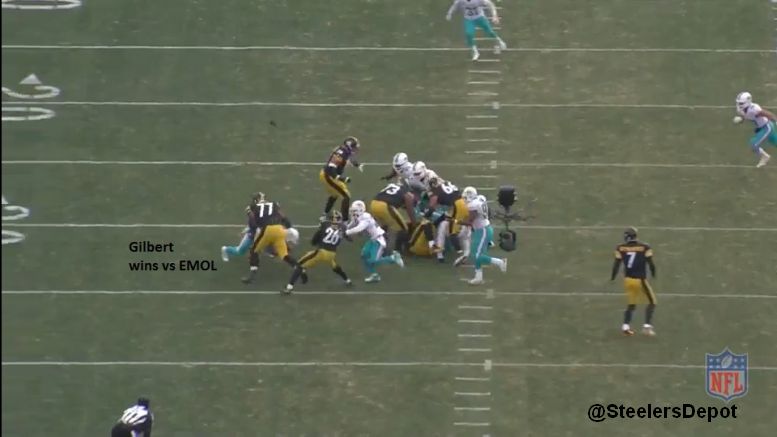 Big kudos to Brown for the stalk block on the corner, helping to spring Bell. It’s the best blocking effort I’ve ever seen from him. Another 26 yard gain.

Two runs, two 26 yard gains. Well blocked, well schemed, with the best back in the league. Munchak had the reputation as a zone guy but he’s peppered in a mix of basically everything in Pittsburgh’s run game. Dart isn’t used often but when it is, it’s effective.