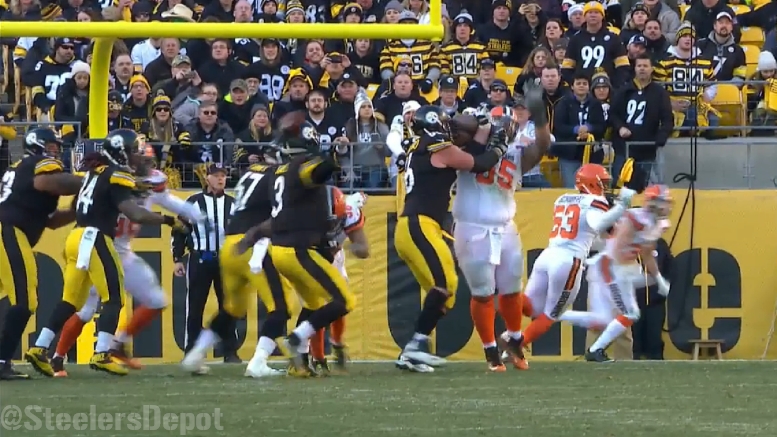 The Pittsburgh Steelers had nothing to play for on Sunday, which resulted in them resting a lot of their starters. That included five-time Pro Bowl center Maurkice Pouncey, which resulted in first-year offensive lineman B.J. Finney making his first start at center after making two starts at guard earlier in the year.

There are a lot of plays to look through in this one so I’m not going to bother with too much pretext, but I will say that Finney has looked better at guard than at center. He did have some struggles early on and settled down more over the course of the game, but he looked more impressive in his previous starts.

It would be fair to say that he has his issues with second-year nose tackle Danny Shelton, but on the second play of the game, the issue was picking up the inside linebacker, who came through the A Gap relatively clean and made the tackle for a three-yard loss in the backfield.

That set the Steelers up for a third and 10, which as you might remember resulted in a sack. Unfortunately, Finney had trouble picking up the linebacker, Demario Davis, yet again. He seemed to understand that he was passing the defensive lineman to Fitzgerald Toussaint, but was still slow to come off and pick up the linebacker, who had a clear line to the quarterback, who with pressure behind him had nowhere to run.

He did clean a lot of those issues up over the course of the game. In fact, on the next snap, he did a very nice job of maintaining his assignment with the Browns showing heavy pressure through the A Gaps. In fact, Cleveland actually spent a lot of the game looking to pepper the A Gaps, perhaps directly in response to Finney being in the game over Pouncey, and it worked early on.

Late in the first half, with the Steelers driving in hurry-up mode, Jamie Collins did get the better of him on a first-down run up the middle, driving a shoulder into the center and then working off him to make the tackle following a short gain.

It should be noted that he was able to get on the move a few times in the second half. The Steelers ran a screen on the second play of the third quarter with Finney among the linemen down the field for a 17-yard gain. He also pulled a bit, as I’ll show soon.

Before that happened, however, it’s worth showing how Finney adapted over the course of the game to the Browns’ A-Gap looks. He kept the pocket clean through a double A-Gap blitz midway through the third quarter.

Toward the end of the quarter, they had Finney pulling on a couple plays in a row. The more notable was the second one, working around right end to pick up the cornerback and create an inside lane on a 10-yard gain.

At the top of the fourth quarter, he did have another breakdown on another double A-Gap blitz. Once again, he passed off the first defender to the back but was slow to pick up the second, who got a hit on the quarterback as he threw.

Finney got his quarterback under pressure several times throughout this game, partly due to communication issues and also partly due to physical issues. He really looked like a backup more than he had before. But this was a meaningless game for the whole line, who were admittedly not at their best, and played like it.