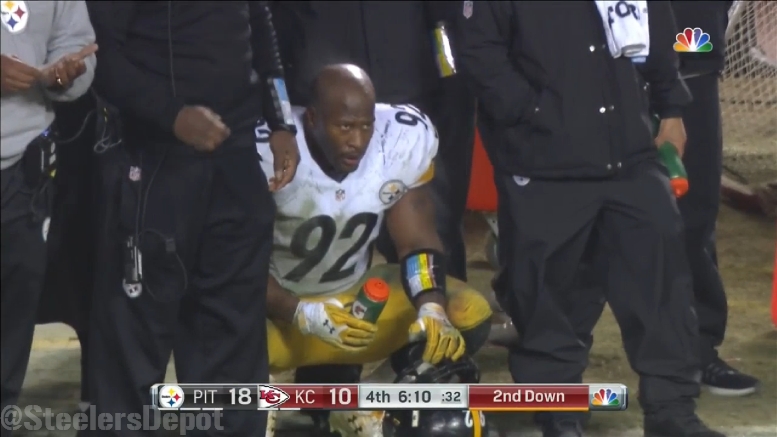 It wasn’t exactly much, or even for very long, but there was a moment during the Pittsburgh Steelers’ victory over the Chiefs on Sunday at which veteran outside linebacker James Harrison was positively gassed, to the point at which he came off the field late in the game. He was replaced for three snaps by Jarvis Jones.

In spite of that, Harrison refused to alter his daily workout regimen, finding himself in the training room in the early hours of the morning, even though the team’s plane had just touched down back in Pittsburgh a short time ago. It was there on social media for all the world to see.

And yet the 38-year-old did sit out of Thursday’s practice while nursing shoulder and triceps ailments, though he did return to ‘full’ yesterday for the final practice session, which is not as intense as the work that is done earlier in the week.

Now, I’m certainly not suggesting that we should read into the fact that he is listed as ‘questionable’—remember, there is no ‘probable’ status any longer, so if a player misses a practice due to a notable injury during the week he needs to be given some type of designation—but I do wonder if the tread on his tires might be somewhat limited for tomorrow’s game.

As far as I’m aware, Sunday’s game was the first time all season during which Harrison checked out of a game due to fatigue. Of course, he spent most of the season rotating behind Jones. But for the past month and a half or so, he has been taking essentially every snap at right outside linebacker, barring a blowout lead, which is what happened the week prior against the Dolphins.

Coming off the field due to fatigue is one thing. Sitting out a practice due to shoulder and triceps injuries is another. Taken in combination, I can’t help but wonder if he will be less effective than he needs to be, which means that we could potentially be looking at a situation in which he does get rotated in a bit during the game if necessary.

If the Steelers have any hope of making it to Houston, they are going to need Harrison to be at his best. He played a key role in their victory over the Chiefs, recording a sack, two key holds, including one that wiped a successful two-point conversion off the board, and three tackles for loss.