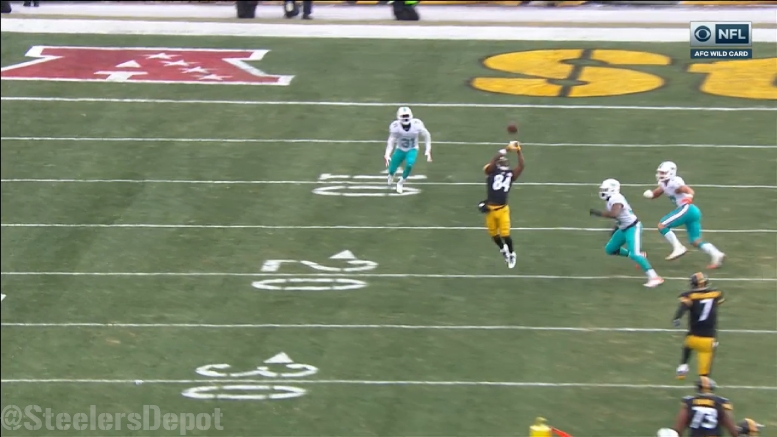 I covered it some in my several articles last night, but, while Pittsburgh Steelers quarterback Ben Roethlisberger is certainly deserving of some criticism for his performance during the game, the fact cannot be dismissed that he also dealt with a lot of issues with his supporting cast.

That is, of course, the byproduct of a stark reality that had been suppressed for much of the season as the offense was able to focus on running the ball. That reality is that, ever since Sammie Coates suffered a hand injury in the second game of the season, the Steelers have been operating essentially without a second wide receiver.

They had options, of course. Martavis Bryant would have been that player had he not gotten himself suspended for the entirety of the 2016 season. Markus Wheaton has played in that role before with success—much to the chagrin of his several detractors—but he was never able to get going this year with a shoulder injury.

Coates, in his second season, looked like he was going to be that guy, putting up very impressive numbers in his first five games—something like 20 receptions for over 400 yards and two touchdowns—but that is the same game in which he broke multiple fingers, and he has been close to a non-factor since.

As a result, the Steelers have been relying quite a bit on the services of players like Cobi Hamilton and Demarcus Ayers, who started the season on the practice squad, although Ayers was a healthy scratch for this game.

According to Pro Football Focus, the offense lost 119 yards through the air against the Patriots due to drops, and you can probably guess who were the primary guilty parties on those drops. Hamilton had an awfully costly one in the end zone. Coates was likely docked for one on the first third-down play of the game on a deep shot that he had an opportunity to catch.

When the Steelers got down quickly and lost Bell on top of everything else, they were put in a position in which they would have to expose their cadre of wide receiver role players to a bigger and bigger stage, and just hope that they were talented enough and prepared enough to step into that role.

As we saw in last night’s game, that proved not to be the case, and the drop numbers and lost yardage through the air serves well to reflect that fact. The Steelers got awfully far this year considering the situations that they have had to deal with at the wide receiver position—it’s just unfortunate that they couldn’t take it all the way. Still, they are better-prepared for next season with Bryant and Coates back clean and healthy, and with tested depth.