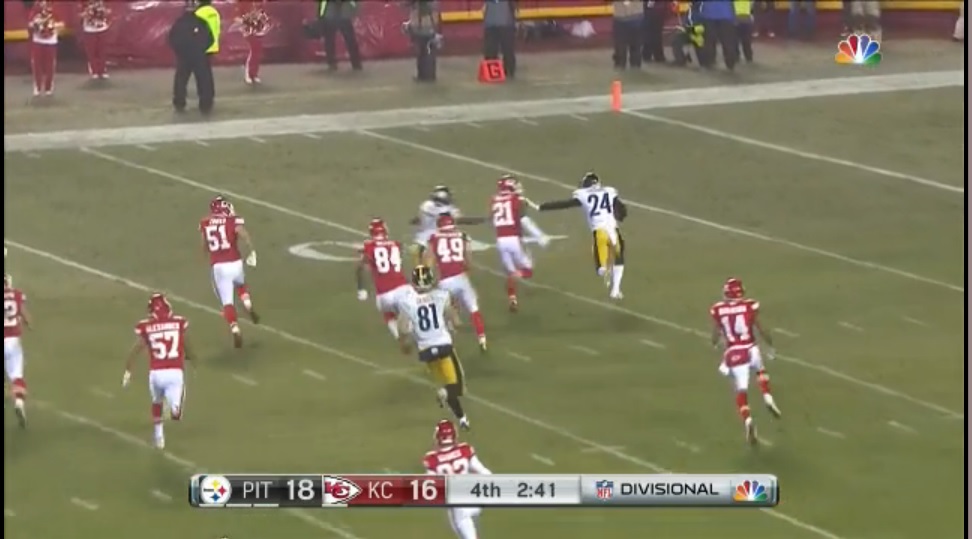 It was the only obvious blemish on the Pittsburgh Steelers’ special teams report card Sunday. After making it a 18-16 game with time preciously thin, the Kansas City Chiefs’ opted against an onside kick and booted the ball deep to Justin Gilbert.

Gilbert caught the ball at the seven but immediately went sideways before being tackled by a host of Chiefs for a loss of two yards. It pinned the Steelers deep and if they had to punt the ball away, likely would’ve given Kansas City excellent field position and a chance to kick a game-winning field goal.

A blunder, for sure.

Danny Smith expanded on what went wrong on that return with Bob Labriola in today’s Coordinator’s Corner.

“The big thing on that particularly play, I thought we executed it quite well except for one situation. The returner can never take a hit in that situation. That’s what we coach and that’s what we teach and we didn’t get that done. We’ll get it corrected and it should’ve been corrected because that’s how we teach it. But you can’t take a hit in that situation because it’s the only opportunity they can get the ball. You get what you can get, you get out of bounds, you get down.”

Maybe that’s why Gilbert was charging hard sideways in an attempt to reach the sideline. But the smart thing to do would’ve been to get upfield, get as many yards as possible, and as Smith points out, voluntarily go to the ground. But Gilbert’s return usage has been limited this year and he hasn’t been exposed to that kind of situational football in a game situation.

That’s one reason why the slower, less dynamic players like Cobi Hamilton and Fitzgerald Toussaint have had a prominent role in the return game. They’re trusted more and are more detail-oriented and that’s where the return game starts. It’s not just about big plays; it starts with ball security and ability to carry out the play.

Mike Tomlin left the return spot opposite Sammie Coates wide open this week. Toussaint has a good chance to return, throwing him into the pile with Hamilton and Gilbert for that role.