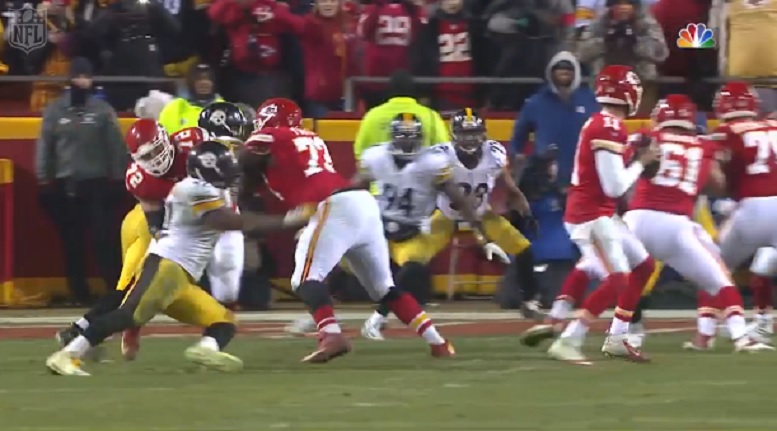 Kansas City Chiefs tight end Travis Kelce wasn’t happy with the officiating during his teams Sunday night Divisional Round playoff to the Pittsburgh Steelers. After the game was over, Kelce pretty much blamed the officials for his team losing the game.

“He shouldn’t be able to wear a zebra jersey ever again,” Kelce said of the game official who made the holding call on Chiefs tackle Eric Fisher during an attempted game-tying two-point conversion try late in the game. “He shouldn’t even be able to work at a f—— Foot Locker.”

On the play in question, Fisher held Steelers linebacker James Harrison as Chiefs quarterback Alex Smith found tight end Demetrius Harris in the back of the end zone for what looked like would be a game-tying two-point conversion.

After the 10-yard penalty was assessed on the Chiefs, they failed on their second conversion attempt as Smith failed to connect wide receiver Jeremy Maclin.

Kelce should perhaps blame himself a little for the Chiefs loss to the Steelers as not only did he drop a deep pass in the middle of the field with 3:00 left in the third quarter, he was flagged for unnecessary roughness after the next play for pushing Steelers cornerback Ross Cockrell.

In addition to swallowing a loss Sunday night, Kelce can likely look forward to eating a nice fine from the NFL for his comments about the officiating.

Kelce goes off on refs pic.twitter.com/QJMLB82Nqb