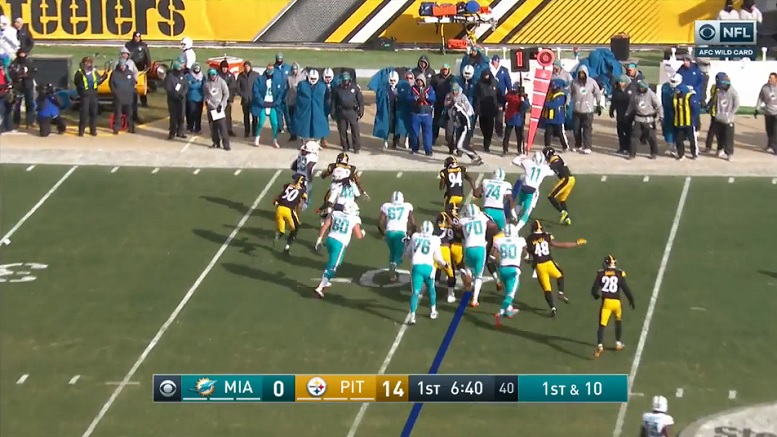 There are the facts. A loss. A 204 yard performance by Jay Ajayi. A quantifiable number of broken tackles, and oh man, there were many.

Then there are the emotions. The frustration and anger of getting destroyed against the run, an area where there’s a proud tradition of being one of the top teams in the league. Keith Butler expressed that feeling to Missi Matthews in this week’s Coordinator’s Corner.

“Our players, our coaches who were players on this team, they certainly didn’t like that when they were able to do that the first time,” Butler said, referencing Ajayi’s first performance. “They were able to run the ball and run the ball effectively against us. We really took it personal. Not only me but the rest of the coaches and our players as well.”

Clearly, that was corrected for the playoff game. Ajayi was held to just 33 yards and a complete non-factor in the game who arguably had just one good run the entire time. The secret to stopping him was that there wasn’t a secret. Play fast, play physical.

“Swarming him. Like we’ve talked about before. Not only swarming him, hitting him, and being physical when we hit him. I was really proud of our guys getting after it and being really aggressive. To the point of being really physical. They did a great job of doing that.”

The run defense set the tone almost immediately, stuffing Ajayi on his first couple of touches, and held to that standard the rest of the way.

“They felt like they had to redeem themselves from last time we played them and let hem know we’re not a soft team.”

Butler said he expects the Kansas City Chiefs, blown out by Pittsburgh 43-14 in the first meeting, likely has the same mentality the Steelers adopted last week.

“I know their coaches well. Their defensive coaches. Their good guys, real good coaches. They were like, ‘wow you just beat the crap out of us.’ That’s what they told me after the game. So that mentality is going to carry over this week and they’re going to have a great week of practice, I’m sure. And be ready for us.”

The Chiefs are at their best. So are the Steelers. It’s going to make Sunday’s game possibly the most exciting one of the weekend.