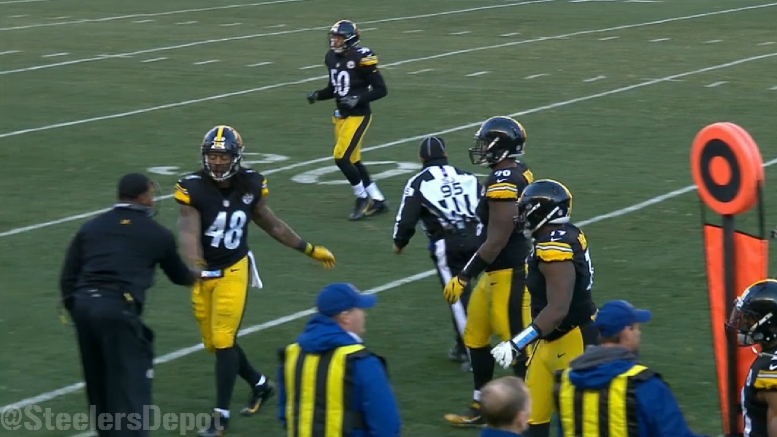 Yesterday against the Browns, 2013 Pittsburgh Steelers first-round outside linebacker Jarvis Jones recorded his sixth sack of his career in his 50th game played. In the same game, Steelers 2015 first-round outside linebacker Bud Dupree recorded the eighth-and-a-half sack of his career in his 23rd game played after notching one in the regular-season finale.

Dupree spent the first nine games of the 2016 regular season on injured reserve after he spent the offseason dealing with a core muscle injury. That situation ultimately evolved to a point at which it was determined that surgical intervention was the best solution for going forward.

When he returned, against the Browns in their first meeting, he played just one snaps, and he remained relatively limited in the following week as well, against the Colts. He was not in the starting lineup until the Week 14 game against the Bills, playing behind fellow second-year outside linebacker Anthony Chickillo, who has hardly played since then.

Over the course of these past four starts, Dupree has recorded four and a half sacks, representing his season total. He recorded his first, and still only, multiple-sack game in Buffalo, registering two and a half sacks, and he has also taken down Joe Flacco and Robert Griffin III in consecutive weeks.

In taking Griffin down yesterday, he also knocked the ball loose, which represented the first forced fumble of his career, and he also recorded a career-high seven tackles, representing his second-most productive game of his career short of the Bills game, in which he also had six tackles in addition to the sacks.

In his first three games of action while getting himself reacclimated o the game—keeping in mind that he only played one snap in the first game—Dupree recorded a total of four tackles. In his last four games, he has recorded 20 tackles, four and a half sacks, recorded a forced fumble, and added a pass deflection to boot.

That is not to say that he is necessarily playing amazing football, as he still has a lot to learn, and is still working his way back from injury, which he has said is still getting better week by week as his speed and flexibility return to him.

Four of his seven tackles resulted in unsuccessful plays for the Browns’ offense, as did, of course, his sack. He also pressured Griffin in overtime on second and goal to force him to throw the ball away, though the Steelers ended up having to stop the Browns for four more plays due to a ball penalty call by the officials.

Dupree may have looked bad on the team’s last defensive play against the Ravens a week ago, but what he has consistently shown outside of that play once getting up to speed is that he still plays with quickness and hustle, and, frankly, that has been enough to separate him from Jones in terms of being able to make an impact, particularly as a pass rusher. Not that Jones has lacked for hustle, but his quickness just doesn’t get him there in time. Dupree’s does.