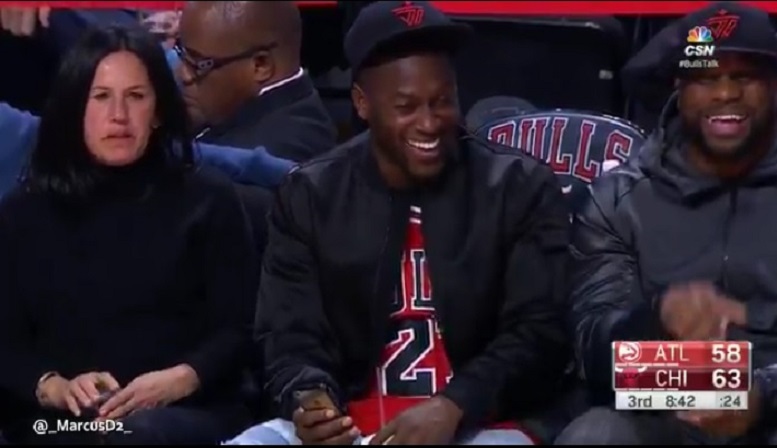 After attempting to “quiet the noise” during his Wednesday Facebook Live session, Pittsburgh Steelers wide receiver Antonio Brown talked to a reporter in Chicago later in the evening and discussed how he’s already put his controversial playoff locker room video behind him.

“I’m already past it,” Brown said Wednesday night, according to Nick Friedell of ESPN.com. “I don’t carry any of that luggage. I’m excited about the opportunity to get past it, to see our team continue to grow. I’m excited in the offseason to get better to grow in my game and come back as the best player in the country.”

While Brown openly admitted last week that him streaming live from the Steelers locker room following the team’s win over the Kansas City Chiefs in the Divisional Round of the playoffs was a poor use of his judgement and disrespectful to head coach Mike Tomlin, he believes that it doesn’t make him a bad person and that overall, he’s proud of his track record since being drafted in the sixth round of the 2010 NFL Draft.

“If that’s the only thing that people can say that happened negative to me in the public [eye] after seven years, it’s something positive,” Brown said. “It’s something that I can say … it’s not that bad. But I feel like I put the team in less than ideal situations trying to give fans an in-tune experience. Obviously, I was excited after the game. But it’s the past. That don’t dictate football games or winning football games. I don’t think it dictates anything other than the distraction the media created.”

Brown, who was in Chicago Wednesday night to watch his good friend Jimmy Butler play for the Chicago Bulls, backed out the 2017 Pro Bowl a few days ago so that he could get away from football for a while before starting his offseason training.

“[He’s] going to do what he does every summer,” Butler said of Brown Wednesday night. “Work his ass off, come in even better than he was the year before. This is in the past. It’s over with. There’s nothing that anybody can do about it now. Keep talking about it, so what? We don’t care. He doesn’t care. I don’t care. The world doesn’t care. All Antonio needs to do is go out there and do what he’s been doing, man. Play hard, do what you do, help your team win games. That’s what you can control.”

If there’s one thing you can count on this offseason it’s Brown training hard. Oh, that and him posting on Facebook Live. The Steelers wide receiver reportedly signed a six-digit deal with the social media giant that requires him to do just that. While Brown will likely continue to receive a lot of criticism for his locker room video, he knows that comes along with the territory of being a high-profile and highly successful professional athlete.

“We know our jobs come with criticism,” Brown said. “It’s all about how you take it. You answer criticism with achievement. You don’t complain; you don’t bitch. You just own it. He’s [Butler] been a positive role model through the ups, the downs. Always had my back, the positivity and the encouragement. Always telling me don’t worry about the naysayers, the doubters and disbelievers. Just go out and be who I can be. That’s my best self and the best player in the world.”

Brown, by the way, will be in Houston next week for the Super Bowl so I’m sure several more interviews are forthcoming in addition to a few more Facebook Live videos.