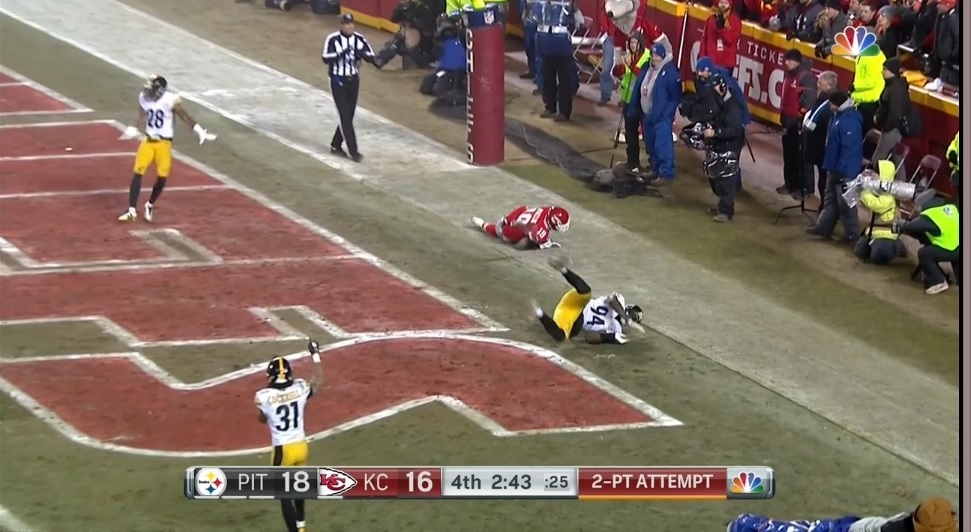 The Pittsburgh Steelers took on the Kansas City Chiefs in the AFC Divisional round this Sunday evening. It was a nail-biting contest, but it would eventually be the Steelers would walk away from Arrow Head with a win by a score of 18-16.

The half was a head-scratcher for most fans, as it seemed the Steelers were doing more to prevent themselves from reaching pay dirt than the Chiefs’ defense. Their first possession, and drive of the game seemed destined for the endzone behind the strong running of Le’Veon Bell, but instead the 11 play, 66 yard drive resulted in 3 points thanks to a 22 yard Chris Boswell field goal.

The Chiefs would answer quickly with 7, as Albert Wilson would haul in a 5 yard reception after putting Artie Burns in an awkward no-man’s land between Alex Smith’s rollout and coverage. This 6 play, 55 yard drive took no time at all, as the Chiefs jumped out to an early lead by the score of 7-3.

The Steelers would answer, as their offense was in fact clicking (although you’d never know that from the halftime score). They would once again stutter in the red zone; a deep 52 yard Antonio Brown reception put them in position to score (Justin Houston was caught in coverage!), but the Chiefs’ red zone defense stood tall. A 38 yard field goal cut the lead by 3, making the score 7-6.

The second quarter picked up where the first left off- with, you guessed it, a third Boswell field goal. A 14 play, 53 yard drive resulted in a 36 yard field goal, making the game 9-6.

The following Chiefs’ drive would stall, but this time because of the Steelers’ defensive pressure. A great dip-and-armtip by Bud Dupree offered an air ball grabbed by Ryan Shazier. This, unfortunately, did not end in any points, because Ben Roethlisberger would give the ball right back via an Eric Berry red zone interception of their own (because of a tipped ball once more).

Boswell would tack on his fourth field goal of the half, this time from 45 yards out, making the game 12-7. The offense was clicking, but seemed to halt in the red zone. The Chiefs’ defense was playing well, but Todd Haley seemed to be outsmarting himself near the goalline.

The second half was much of the same, as the Steelers’ offense was sputtering down the field once more. Their first offensive possession yielded a 7 play, 49 yard drive that ended in, you guessed it, another Boswell field goal. The 43 yard boot made the game 15-7.

Kansas City tacked on a field goal of their own, after trading punts and making a few passes. For the most part, the Steelers’ defense did a good job containing the likes of Tyreek Hill and Travis Kelce. After a Cairo Santos 48 yard field goal, the lead shrunk to 15-10. Crazy to think it was only a five point game.

After a record breaking 6th Boswell field goal that made the game 18-10, the Chiefs finally made some noise, albeit a penalty that jumpstarted the fireworks. Sean Davis was called for hitting a defenseless receiver near in the red zone. This placed the ball inside the 10, and Spencer Ware cashed in with a 1 yard touchdown run.

The 2 point conversion would be the back breaker for the Chiefs. Eric Fisher would be called on the hold against the veteran James Harrison, and the second attempt would yield no points.

Although winning the game by a score of 18-16, the game was incredibly nerve wracking; the Steelers’ offense was doing what they needed to, accumulating 389 total yards, 171 of them on the ground. It was their red zone offense that was sputtering, walking away with field goal after field goal. If they want to hang with the New England Patriots in the AFC Championship next Sunday, they’re going to have to find their groove- and find it fast.