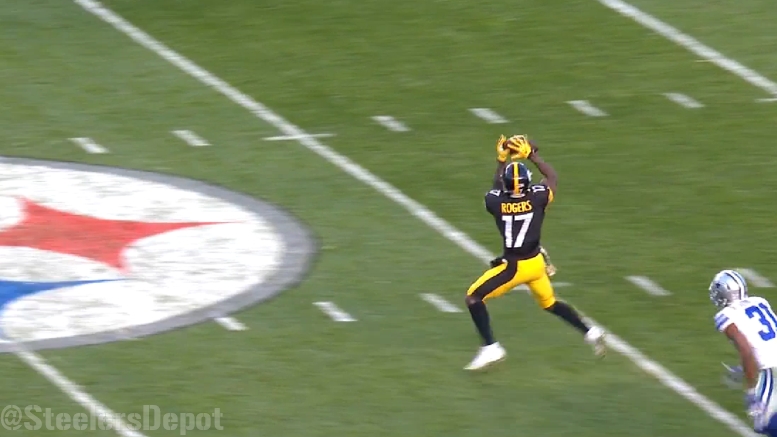 “I don’t know if that’s the one thing, but you’ve got to score when you’re down there. You know, there were other missed opportunities, whether we didn’t execute well enough, whether plays weren’t made, by me or other guys. At times I almost felt maybe it was too big for some of the young guys.”

That was quarterback Ben Roethlisberger’s response to a question about whether or not the Pittsburgh Steelers’ inability to score a touchdown at the end of the first half was the turning point of the game. You might notice that he volunteered the information at the end of his answer, in a question to which it was not directly tied, about some of his young teammates.

I am presuming that Roethlisberger is talking primarily about his own side of the ball, but he is probably not wrong in feeling that there were moments in last night’s game against the Patriots during which the moment might have been a little bit too big for some of the Steelers’ role players being asked to take on a heavier load than they were supposed to this season.

As I wrote about earlier today, Pittsburgh lost 119 yards through the air due to drops, for starters, and at least one of those drops was a touchdown. Cobi Hamilton, Eli Rogers, and Jesse James all had their issues against the Patriots and contributed to the Steelers’ general offensive ineffectiveness.

That is not to say, of course, that they played consistently poorly throughout the game. Each of them came up with some big catches, and Hamilton even finished off the contest with a 30-yard touchdown reception, but the reality is that they shouldn’t have even been playing in the role that they were featured in.

With the absences of players such as Martavis Bryant, Markus Wheaton, Ladarius Green, and, for the most part, Sammie Coates, others such as Hamilton, Rogers, and James were asked to step into a much bigger role than was supposed to be in the cards during the offseason.

The Steelers were able to get by just fine with them as key pieces of their offense for the majority of the season, but they also had the security blanket of an excellent offensive line and a fantastic running performance, particularly in the second half of the season, to limit their responsibilities.

Hamilton dropped a touchdown in the end zone, then caught another as an ineligible receiver. Rogers put the ball on the ground at the Steelers’ 28-yard line. James dropped a pass or two, or at least failed to come down with the sort of catch that you have to make at this stage, including a third-and-seven on the Patriots’ 39 in the middle of the third quarter.

Roethlisberger would probably know better than anybody on the team whether or not his young skill position players shrunk from the spotlight. His comment after the game certainly seemed to think so. And they have taken a lot of heat for it already. But just remember, they were already thrust into bigger roles than they were meant to be in in the first place.