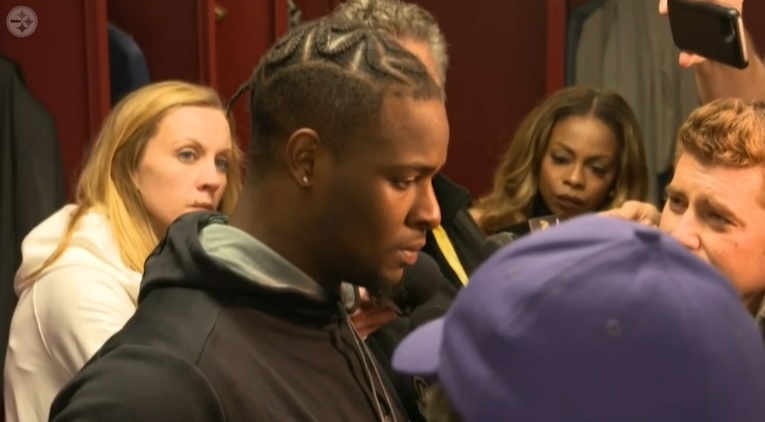 It’s far from the only reason why the Pittsburgh Steelers’ season ended yesterday but as our Matthew Marczi pointed out, it was an end that again saw Le’Veon Bell hobbled on the sidelines. He left in the first half of yesterday’s game, ending things with just six carries for 20 yards.

Bell spoke to reporters after the game about the injury.

“It was a run, a draw play, I ended up getting two or three yards,” he said via Steelers.com. “But I couldn’t be myself. Normally, I would’ve been able to hit the gap and burst. On that play, I felt I couldn’t burst anymore. I felt like I was holding the team back.”

He attempted to enter the game again after initially coming out but that was a short-lived hope and Bell stood on the sidelines for the entire second half. The run game faltered, held to under 60 yards, and forced the Steelers to become something they haven’t had to deal with in weeks: being one-dimensional.

Bell told reporters he “knew immediately” the injury was going to hinder him and was something he’s been dealing with for several weeks.

After being able to play in the playoffs, and excelling in the first two games, not being able to help your team in a blowout loss makes it sting all the more.

“It sucks. It’s real disappointing. Like I said, we worked so hard to get here. I felt like I’ve done a lot for us to get here. To not be able to play and go to battle with my teammates, it hurt.”

Though it doesn’t soothe yesterday’s loss, Bell still had a remarkable playoff run. In total, he piled on 357 yards rushing at a 5.5 per carry clip. That gels with his regular season production and assuming he returns – a safe bet, if you’re wondering – he’ll remain the best back in the NFL.