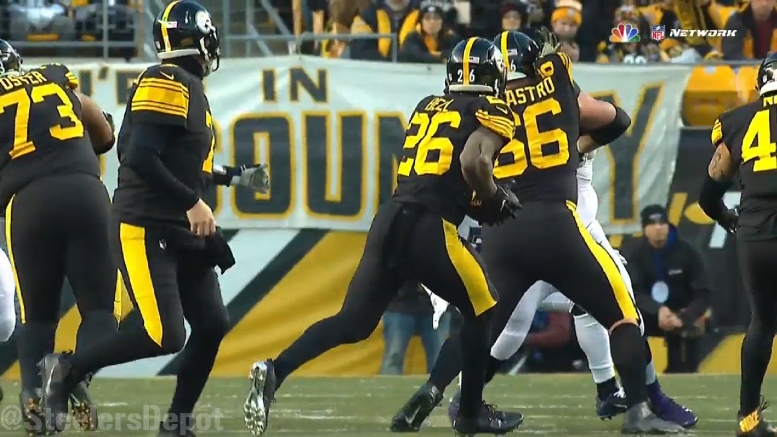 Question: Will Le’Veon Bell come off the field during the playoffs?

It’s likely no secret that when Le’Veon Bell is healthy, he pretty much never comes off the field, probably something that can be said about him more than any other running back in the league. The only real exceptions this season have been in meaningless circumstances, such as in victory formations, or in particularly out of reach blowouts late in games. There have been few exceptions to this.

But most of those exceptions came earlier in the seas when DeAngelo Williams was healthy, which was not the case for more than half of the time that Bell has been on the field. Williams did return to see a couple dozen touches for the Steelers in the season finale when Bell and other starters were rested.

When both were healthy, they did get both of them on the field somewhat often, though it didn’t always go to either back. Occasionally, Bell would even sit on the sidelines and give Williams some time to work.

But I have a sneaking suspicion that Sunday’s game may well be yet another ones of those games in which Bell plays every single snap, from the beginning of the game to the end. You can tell in his comments over the course of the week how much this particular game means to him, because it is the first playoff game of his career. The Steelers have made the playoffs in his previous two seasons, but he was injured for both runs.

Still, as the playoffs march on, with Williams back healthy, the Steelers may have a mind toward preserving Bell to keep him healthy and fresh. Of course, that all depends on how deep into the playoffs they can manage.

Bell is certainly a special talent, and he is ascending to a stage that has been long-awaited. This is the first time he is going to get to participate in the postseason, and he is going to want to soak up as much of it as possible. But he also, in hindsight, saw the wisdom in his coaches sitting him for the season finale and what they did for his body.