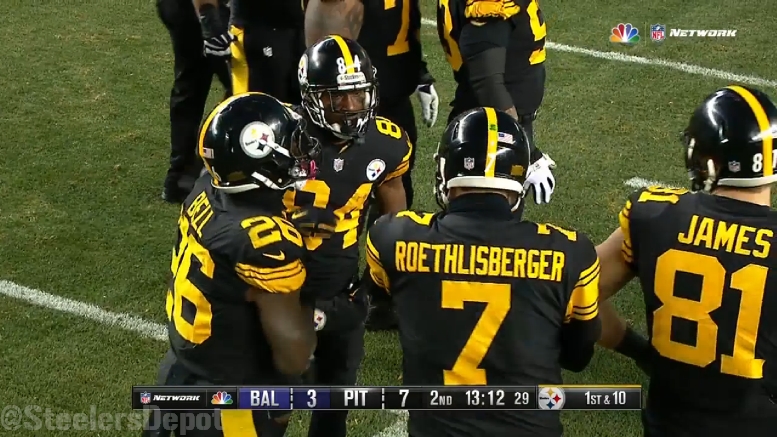 Question: Game Edition – Will the Steelers’ Killer Bs be killer in their playoff debut together?

They have been together for three seasons prior to this one. They have been to the postseason in two of those three season. And yet today’s game will mark the first time in their history together that quarterback Ben Roethlisberger, wide receiver Antonio Brown, and running back Le’Veon Bell have all been on the field together in a playoff game.

If you think they are not aware of that fact, or that they don’t see it as important, you had probably reconsider, especially after they went into last year’s Divisional round without Brown and Bell and had Roethlisberger banged up.

The Steelers know what sort of damage they can do as long as they are healthy—specifically, if their trio of offensive superstars are healthy, behind a healthy offensive line. And that is what they are bringing into the stadium today for the first time in a playoff atmosphere.

Bell finished the season with more yards per game than anybody else in the NFL. Brown finished with the second-most receiving touchdowns in the league. Roethlisberger’s statistical output may not have been incredible this year, but he finished out his season with two impressively-martialed game-winning drives against divisional opponents to secure the AFC North.

Oh, and they are all fresh, and healthy, coming off of a week’s rest, since the Steelers were able to rest several starters for the regular-season finale due to the fact that they were not in a position to help or hurt their playoff seeding.

The stage is set for these triplets to have a big game. The Dolphins are even trotting out a banged up secondary to boot. It is well within their grasp to take this game over—hell, to take over the entire playoff run.

Whether or not they manage to do that is the question. The Steelers offense has been tough to stop over the past eight games unless they have been stopping themselves with drive-killing penalties or costly turnovers.