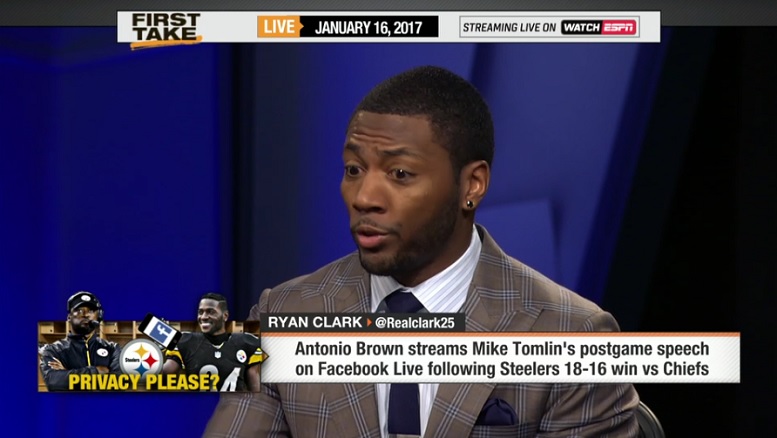 Question: Does Antonio Brown deserve the backlash that he is getting for posting the locker room video that everybody has been talking about?

This is one of those rare instances in this daily question series in which I’m not only posing a question to which there is a subjective answer, but I’m also going to go ahead and give my answer. But before I do that, I want to open the topic up to the floor.

We know the deal by now. Antonio Brown posted a live video to his Facebook page following Sunday’s win, during which he caught some choice comments from players and coaches that evidently were juicy enough to draw headlines. Apparently, this live video thing is something that Brown has been doing for a while—but which he obviously will not be doing in the future.

First and foremost, what he did was unquestionably wrong, in the very obvious sense that it violates a league rule, whether or not one might agree with that rule. And yet it’s there in black and white, and it forbids players from posting to social media until after media interviews are through following a game.

So Brown is probably going to be fined, and you can bet your Patriots (get it) that this is the last such video you’re going to see from him.

But is what actually happened really that big of a deal? Are there actually going to be meaningful ramifications from what happened? No. Not in my opinion.

Mike Tomlin likes to treat his players with respect and dignity, as adults. He doesn’t take a proactive stance with social media, unlike Patriots head coach Bill Belichick, because he respects his players’ autonomy and decision-making, giving them the benefit of the doubt.

Brown may have gone a bit too far this time around, but, ultimately, it’s not a big deal. If the Steelers lose on Sunday, it’s not because the Patriots had their feelings hurt. Brown didn’t commit “treason”, as I saw somebody on ESPN claim. Posting a video after a big, emotional win doesn’t make you self-absorbed. He’s just a young man enjoying his life and the camaraderie that he has with his teammates. Much ado about nothing. The backlash is greatly overblown, in my opinion. What’s yours?