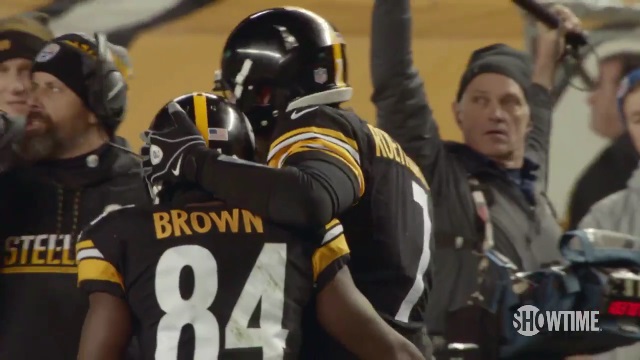 In case you missed it on the recent episode of ‘Inside the NFL’, Pittsburgh Steelers quarterback Ben Roethlisberger and wide receiver Antonio Brown were mic’d up during Sunday’s game against the New York Giants and the two congratulated each other on the sideline following the second quarter touchdown. You can see that exchange below.

During his Tuesday morning interview on 93.7 The Fan, Roethlisberger was asked if he knows why Brown now wants to be called “Ronald.”

Back to the touchdown. Roethlisberger was asked to break that play down Tuesday morning and he obliged the request.

“That was a no huddle play, I saw some of the defense, so I put the two, A.B. and Eli [Rogers], together over there to work a combination and really was trying to get A.B. the ball,” Roethlisberger said. JPP [Jason Pierre-Paul] kind of came around the edge and I stepped up. Gil [Marcus Gilbert] did a great job of pushing him wide just like we had talked about. When you’ve got a speed-rush guy and he wants to speed-rush around the outside and get depth, well, that opens up a step-up lane and a get out of the pocket if you need to. And that’s what I did. Stepped-up, got out of the pocket and then you see the open grass you might be able to go.

“But you also know you’ve got Antonio Brown out there and Antonio’s pretty special. When he’s got one guy on him, that’s a win for us and the defender had his back to me, so we call that wide open in the NFL. If a defender’s not looking at you and your receiver is, whether it’s Antonio or not, that’s open. So, obviously could’ve ran it, but knowing that you have Antonio, who’s the best in the business, a chance for a ball in the end zone, you’ve got to take that chance. If you’re a gambling man, you’ve got to take that chance and I did it and he did the rest.”

In case you missed the Tuesday night airing on Showtime, you should be able to see the replay of it on the NFL Network later this week. Check your local listings for the time.

When you’re a top wideout and want to go by Ronald instead of @AntonioBrown, @steelers Big Ben will abide.#InsideTheNFL TONIGHT 9p ET/PT. pic.twitter.com/FxmDxTCsR3